On August 1-4, 2022, the Macro Finance Research Program (MFR), under the auspices of the Becker Friedman Institute (BFI), hosted the 2022 MFR Summer Session for Young Scholars for PhD students working on their dissertations at the interplay of macroeconomics and finance.

Beyond the global financial crisis: MFR’s 2022 Summer Session introduces young scholars to the next frontiers of macro finance research

While working as a research analyst on the Federal Reserve Bank of New York’s macroeconomic team, Cindy Chung recognized how often she and her colleagues were considering the financial sector when developing forecasting models for monetary policy events. Macroeconomic research, which has long developed in isolation from the markets, underwent a reckoning during the global financial crisis. Economists and investors alike were largely blindsided by the widespread repercussions of the real estate market’s collapse.

“That’s what triggered my interest,” Chung, a second-year Ph.D. student at Stanford University, said. “Policymakers were focused on this intersection.”

Engaging young scholars like Chung who are interested in the links between the macroeconomy and the financial sector lies at the core of the Summer Session for Young Scholars. The conference, hosted by UChicago’s Macro Finance Research Program, motivated Chung and 40 of her peers from more than 20 doctoral programs around the world to travel to campus last month for a week-long “summer camp.” The conference is designed to deepen the young scholars’ modeling skills and knowledge about how to look under the hood of the macroeconomy and investigate its interconnections with the financial sector. The students also gain a unique opportunity to network with like-minded peers and learn from leading scholars in the field.

While the global financial crisis launched a precursor to the MFR and its Summer Session for Young Scholars, MFR Director Lars Peter Hansen has seen substantial changes in the range of topics that are explored in frontier macro finance research. The broad reach of the field was reflected in the presentations by a dozen scholars working at the forefront of macro finance. Hansen observed that this year’s summer session was “truly eclectic,” exposing emerging scholars to a range of disruptive influences, new tools, and a variety of emerging topics in the macro finance frontier.

Hansen’s original interest in summer programs for young scholars started after seeing the success of the summer programs that brought together emerging scholars and distinguished scientists from around the world at the Woods Hole Oceanographic Institution in Massachusetts. “Of course, macro finance is different from oceanography,” Hansen said. “But the intellectual construct implemented at Woods Hole is an excellent one to support important conversations among researchers of different vintages.”

While Hansen’s own presentation focused on innovative ways to model uncertainty and its consequences for markets and policy, he remarked that the full array of sessions included “fascinating presentations on how to use models and evidence to confront research and policy questions on topics such as inflation, monetary policy, financial intermediation, market structure, information capital, cryptocurrencies and climate change.” “There was a continual back and forth between models and evidence that provided a richness to the intellectual exchanges, which will set the stage for the emerging scholars to make modeling advances in the future that are even more empirically grounded,” Hansen said.

Ralph Koijen, a member of the Macro Finance Research program advisory committee, also offered his perspective on how the macro finance field has changed and grown over the fifteen years of his research career. In addition to the extensive empirical and theoretical literature exploring the role of intermediaries in asset pricing and macro finance, Koijen pointed to the study of crises such as the European sovereign debt crisis and the COVID-19 pandemic including policy responses and their potency as active research areas in macro finance. He also emphasized the important new insights that have emerged from survey evidence on beliefs and empirical evidence on portfolio holdings of institutions and investors, evidence that he featured in his own research.

In his presentation designed to engage students in using widely accessible data to answer new questions, Koijen demonstrated how he leverages portfolio holdings data into estimating models to examine investor behavior changes in markets where demand is often inelastic. “Models tend to have predictions about portfolio choice and how investors change their portfolios, but we typically haven’t used portfolio data to test these models,” he said. Koijen aims to answer investor behavior and monetary policy questions about large shifts in holdings by single groups of investors, such as when “green” investors move toward environmentally friendly stocks.

Yueran Ma said that during her Ph.D. program at Harvard it became evident to her that “macroeconomics tackles many interesting and broad questions,” but she also recognized that some classic frameworks and foundational assumptions came from researchers’ deductive reasoning with relatively little empirical guidance. Finance offers a rich set of institutional knowledge about how firms, individuals, and markets operate in practice. “Thus, research in macro finance can facilitate the integration of empirical information about economic activities and macroeconomic inquiries,” Ma said.

In her presentation, Ma encouraged students to bring data to the evolving notion of “perfect rationality” in key market actors, such as households. Households experience uncertainty about their financial future and make decisions based on personal expectations. “The boom-bust cycle of the mid-2000s, where a lot of people really believed that house prices would go up forever, has created a revival in understanding how people actually form expectations,” Ma said. Ma’s work uses empirical evidence to inform new expectation formation models that allow economic analysis to deviate from long-held notions of perfect rationality.

This year’s conference also showed how macro financial thinking is advancing into new territory. Presentations by the dozen scholars working at the forefront of macro finance introduced the young scholar participants to a range of disruptive influences, new tools, and emerging frontiers.

This variety of presentations was one of the conference’s main points. “I think interdisciplinary work is really valuable because if you think about where creativity comes from, it’s not coming from repetition,” said Ma, who also serves as an Advisory Committee member of the Macro Financial Research program.

Antoine Hubert de Fraisse, a third-year Ph.D. student in finance at HEC Paris and a summer session young scholar, concurred, “I think most of the new ideas I developed came mainly from the talks that were the most distant from my research.”

For de Fraisse, the quality of interactions among the faculty and his peers was also valuable. “I think of (the summer session) as a way of breaking the glass that might separate students,” he said. “I’ve attended many conferences and Ph.D. seminars, but I think none of them has been as intellectual stimulating as this one.”

Another priority of the summer session was introducing young scholars to areas where they might want to steer their research next. Each presenter dangled new research questions in front of the scholars, hoping to entice them deeper into the macro finance research frontier.

“Data is the most valuable asset these firms have,” Laura Veldkamp said in her presentation on the emerging field of valuing data as an asset class. She and Maryam Farboodi  presented on the macroeconomic and financial implications of an economy transitioning from a goods market to a data market. While Veldkamp considered valuation challenges, Farboodi focused on data measurement and investor use of data. Her findings showed that most data processing by investors is about large-growth firms because they perceive the value to be there. “Data is the new oil,” Farboodi said.

In closing, Veldkamp quipped that if the young scholars had an idea that she and Farboodi didn’t mention in their presentations, it’s probably new. “My guess is nobody’s written that paper with a high degree of competence yet, so there are a lot of new directions to explore,” she said.

The MFR Summer Session for Young Scholars event was designed for early-career professionals and doctoral students in economics and related fields who are interested in developing enhanced macroeconomic models with linkages to the financial sector. It provided an opportunity to learn about, discuss, and advance work on macro models with financial sector linkages and related topics. The goal in gathering elite researchers and promising young scholars through this event is to exchange ideas and to construct better, more comprehensive models for assessing systemic risk stemming from activities in the financial sector that can impact the economy. Emerging scholars can play an important role in that effort. This event engaged these young scholars in that mission and provides access to methods, insights, expertise, and contacts that can enhance their efforts.

The 2022 MFR Summer Session for Young Scholars was co-sponsored by generous financial contributions from the Alfred P. Sloan Foundation and Edward R. Allen, AM ’85, PhD ’92.

The MFR Program is led by Lars Peter Hansen, the David Rockefeller Distinguished Service Professor in Economics, Statistics, and the Booth School of Business, and the recipient of the 2013 Nobel Prize in Economics. Throughout the four days of this summer session, faculty from the Kenneth C. Griffin Department of Economics and the Booth School of Business surveyed and discuss recent research on a variety of topics in the macro-finance field. 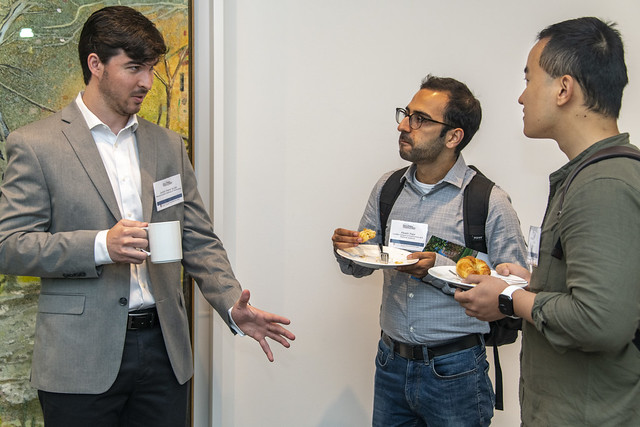 Digital Currencies: What does the Future Hold?

The Consequences of Uncertain Climate Change for Markets and Policy

Corporate Bonds: Pricing and Beyond

Random Search and Over the Counter Markets

The Dollar, CIP Deviations and Frictions in International Capital Markets

Expectations in Finance and Macroeconomics

(Virtual Presentation) The Fiscal Theory of the Price Level

The Macroeconomics and Finance of Data as an Asset

The Development Lunch Workshops are operated with support from the Becker Friedman Institute and The Pearson Institute for the Study and Resolution of Global Conflicts and is a collaboration...
September
30
2022
Upcoming Event • 1:30 pm CDT • Harper Center C05

This workshop focuses on the application of core economic tools to address questions that are of interest to researchers and policymakers alike. The seminar series meets weekly on Mondays...
Organizers / Guests
April
6
2012
Past Event • All Day • Rockefeller Center