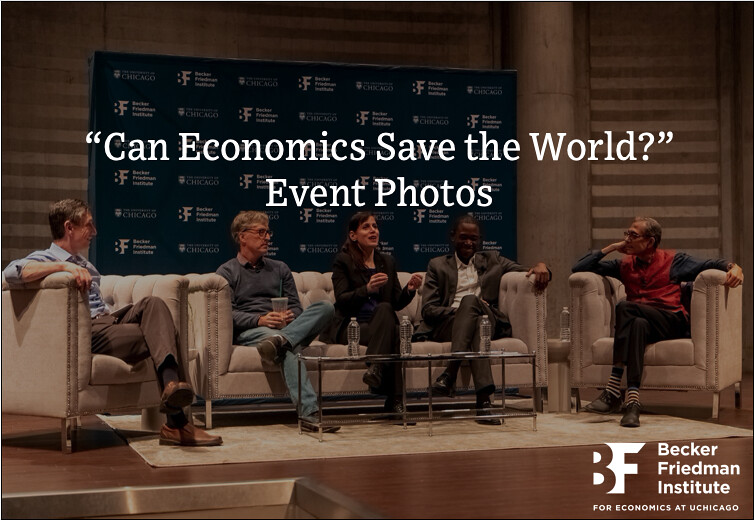 Why Nobody Trusts Economists

Early in his career, economist Abhijit Banerjee didn’t see himself writing books for broad, non-expert audiences. Now, on the heels of receiving the Nobel Prize and releasing his latest book Good Economics for Hard Times, Banerjee is spending considerable time focused on clearing up public misconceptions about economics and, ultimately, rebuilding public trust in the field and its ability to contribute solutions to today’s most urgent problems.

“We’re talking about many things now where I think economics have a great deal to say, and I think what’s striking is how little we are being listened to,” said Banerjee, the Ford Foundation International Professor of Economics at Massachusetts Institute of Technology. “On issues that we have views on, and in particular, issues on which most economists agree, it turns out that the rest of the world just disagrees.”

This gulf – and how economists responded – was central to Banerjee’s conversations on Nov. 19 with three of the University of Chicago’s leading economists Katherine Baicker, dean of the Harris School of Public Policy, Steve Levitt,  the William B. Ogden Distinguished Service Professor of Economics, and Michael Greenstone, director of the Becker Friedman Institute for Economics and the Milton Friedman Distinguished Professor of Economics, in addition to Wally Adeyemo, newly appointed president of the Obama Foundation. More than 700 people attended the conversation hosted by the Becker Friedman Institute.

Banerjee, who received the 2019 Sveriges Riksbank Prize in Economic Sciences in Memory of Alfred Nobel with Esther Duflo and Michael Kremer, pointed to several issues where the opinions of the public and economists diverge, and noted one poll finding just 25 percent of the public trust economists.

“We wrote this book to hold on to hope, to tell ourselves a story of what went wrong and why, but also as a reminder of all that has gone right,” said Banerjee, reading from Good Economics for Hard Times.

The panelists agreed – economists have work to do to close the gap between rigorous research being done in institutions like the University of Chicago and real-world policy problems and public perceptions.

Levitt has sold more than 7 million copies of his best-selling Freakonomics books and appears regularly on the Freakonomics podcast and blog. From his perspective, having a platform is only one obstacle that needs to be overcome. Another is public perception around which issues are considered economic problems in need of solutions from economists.

“I think there are very few people outside of the profession of economics who would say that climate change is fundamentally an economic problem. And I think a big part of problem-solving is that the answer people come up with is heavily determined by the lens with which they approach a problem,” Levitt said. “So if you can convince people that a problem is an economic problem, then they’ll put an economic solution on it.”

Greenstone and Baicker shared perspectives on their experiences putting economic research into practice on a national scale. Both were economists with the White House Council of Economic Advisers, with Greenstone serving in the administration of President Barack Obama and Baicker serving in the administration of President George W. Bush.

To make something useful for policymakers, “we have to sacrifice some of the careful work that we’ve slaved over and some of the subtlety for which our colleagues reward us. And that’s a choice that not everyone wants to make,” Baicker said. “But if you want someone to be able to act on your findings, you have to make them not only usable in a time when someone can use them, but you have to give up on the second, third, fourth order points to convey the one thing that might actually result in a change.”

Adeyemo, who previously served in senior positions with the U.S. Treasury Department and the White House National Economic Council in the Obama administration, said oftentimes policymakers are working within constraints that may prevent the most ideal solution from being implemented.

“I think that for a policymaker, getting the view of an economist is helpful, but the reality is that you work in a world that is complicated by several other things that require the views of other academic fields, and you often are bringing those things together,” he said.

Banerjee noted that the way economists’ express value can be alienating for many, and there’s a need to incorporate human dignity into economic research and communication. Trade policies can result in the relocation of jobs and loss of jobs, and for people “we forget that it’s not just that they lost a job. They also lost a life,” he said.

As an expert in the economics of health systems, Baicker said that for non-technical audiences the language of economists can seem inhumane, especially when discussing things like healthcare in terms of costs and benefits.

“I’ve been around economists for 30 years. I don’t think I’ve ever seen the word dignity used or appear in an economic context,” Levitt said. “And I welcome it. I think Abhijit is exactly right to think that one of the reasons that economists struggle is because they haven’t taken a holistic view of how non-economists think about things and what is important.”

Greenstone noted that concepts like dignity may already be in economic models, but they’re not communicated in that way. “You could take Abhijit’s point about reductions in people moving around the country. We would call that high moving costs. Well, I don’t think it’s crazy to call that dignity, or liking the place you live, or something like that,” he said. “But we don’t ever talk about it that way publicly. So why is that?”

Entering a new stage of his career as a Nobel recipient and the ever-growing public platform the award brings, Banerjee emphasized the need to change the way people, both inside and outside of academic institutions, regard the field and its practitioners.

“I frankly think that there’s a sense in which we are victims of the kinds of formal language we create,” Banerjee said. “[In Good Economics for Hard Times,] we were trying quite hard to plant words that we should use more. And I think words are powerful.”

Registration Opens and Refreshments are Served

Across the world, the move towards cashless societies has gathered momentum, incorporating a variety of digital instruments ranging from payment apps to cryptocurrencies and central bank digital currencies (CBDCs)....
May
27-28
2022
Upcoming Event • All Day • Centre for Economic Performance