The dynamic growth of China’s economy in recent decades has raised many questions among economists about the nature of this progress, including the role of markets and the state, and the sometimes contentious but often symbiotic relationship between the two. A recent forum featuring Chinese private sector executives and government officials, along with Chinese and US economists, explored these and other topics, as part of a major conference at Tsinghua University School of Economics and Management (Tsinghua SEM) in Beijing, organized by the Macro Finance Research Program (MFR) of the Becker Friedman Institute (BFI) for Economics at the University of Chicago.

“Discussions like this, which bring together members of the private sector, government, and researchers, are extremely important as China looks to address complicated policy challenges,” said Lars Peter Hansen, 2013 Nobel laureate in Economics and professor of economics at the University of Chicago, and forum moderator. “Information sharing is crucial to good policy outcomes, and such events, as well as the relationship between Tsinghua and the Becker Friedman Institute, can help facilitate a useful exchange of ideas and information,” Hansen said.

The broader conference was an effective example of such an exchange, according to Zhiguo He, Fuji Bank and Heller Professor of Finance at the University of Chicago’s Booth School of Business. “This first joint academic conference between Tsinghua and BFI was a complete success and bodes well for the future,” He said. “The papers were insightful and the discussion was challenging, exactly what you expect when you bring together top researchers from China and around the world.”

Titled “Challenges in Finance and the Macroeconomy in China,” the Dec. 12, 2019, forum was sponsored by Harvest Fund Management Co., Ltd. In addition to Hansen, the forum featured

On the question of how best to encourage economic growth, Sargent began the discussion by recounting three targets from the China’s 2013 Reform Plan, and asserting that such goals were important for any economy: markets should play a decisive role in the allocation of resources; interest rate liberalization should occur, also via markets; and all natural monopolies should be eliminated.

While China may be striving for those targets, Sargent suggested that China could learn from the United States, a country with an economy and financial markets that have been influenced by market forces for generations. However, rather than touting the United States as a positive example, Sargent sounded a cautionary note about the current state of the US economy. Citing the work of the French economist Thomas Philippon, Sargent warned about rising market concentration within certain industries, the increasing gap between profit share and labor share, and the decrease in productivity growth and in the amount of R&D investment. As a final warning to China about challenges seemingly inherent in the United States, Sargent noted the increasing influence of lobbying and the negative effects such rent-seeking can have on competition.

Regarding China’s growth potential, Xu Chenggang noted that China’s household consumption rate is far below averages of developed nations, due in large part to the high share of national income held by the government. This raises a fundamental tension between consumers and the Chinese government, according to Xu, an issue not easily resolved and one that will likely persist as a near-term drag on the Chinese economy. Further, China’s high growth rates in the first decade of the 21st century were largely fueled by an export-driven economy, Xu said, but those growth opportunities have largely subsided. This means that those same households that are facing constraints on consumption will become increasingly important for China’s growth prospects.

As a means to fuel growth, Xu noted the importance of developing cutting-edge technologies. However, echoing Sargent’s retelling of China’s Reform Plan, Xu stressed that Chinese industry should not become too dependent on government subsidies, but should rather allow market competition to drive innovation and productivity.

The essential difference, other than size, between Chinese and US financial markets is that those in the US are more transparent and efficient, said Zhao Xuejun, and both of those features should be goals of Chinese markets. In the US, he said, when a company discloses information, everyone—from the private sector to the government—is aware of all of the information at the same time. In China, though, the opposite is true: some players know more than others at different times. This opacity of information makes reform difficult, Zhao said, and he likened the process to “crossing the river by feeling the stones under water.” In other words, financial market reform will be marked by trial-and-error, and will not come easy.

Xu added that firms in China do not face the consequences of poor performance as they would, say, in the US. In China, failing firms are buttressed by the government and, likewise, the Chinese economy does not benefit from the churning that would occur within a freer market system. To build a better financial market means that financial regulation needs to reform, Xu said. However, in China, financial regulation is intertwined with the law enforcement mechanism, and an independent judicial system does not exist. Therefore, in order for financial regulation to play a proper role in shaping more efficient financial markets in China, the country’s judicial system—especially regarding the security law and its enforcement—must be reformed.

Regarding the role of government in financial markets, Xiao Gang said that the goal of government regulation is to maintain transparent, fair, and equitable markets and improve its transparency. The key to national supervision is to draw a clear line between supervision and regulation, so as to give play to the constructive role of supervision authorities while respecting the principle of market participants. On the future of China’s stock market, Xiao said that the goal proposed by the Chinese government for China’s stock market is to promote its gradual marketization, legalization, and internationalization. The proportion of foreign capital is still relatively low, so there is still much room for further opening-up. At the same time, Xiao stressed, more foreign investment will bring new challenges to the Chinese market, mainly in the form of increased impact on market volatility.

Hansen motivated the discussion about the environment by refocusing on a core issue informing the forum—the relationship between markets and the government. What is the role of the government vs. investment and entrepreneurial opportunities to address climate change and to develop new technologies that efficiently deliver clean energy? As Hansen noted, this is a big question for the United States and all countries, not just China.

Sargent began by suggesting that this was not an either/or proposition, but that perhaps the two forces, government and markets, working in tandem could effect change. He noted examples of government setting incentives to deliver outcomes; for example, offering prize money to solve technical problems or to spur innovation. He also noted that China has led the way in the development of certain renewable energy platforms, like those involving wind power.

Xu was sanguine about the government’s potential role in advancing sustainable energy outcomes, noting that government is rarely effective at advancing “technology on the frontier,” and frontier technology is exactly what is needed. As with financial markets, Xu warned about a reliance on subsidies as they may only serve to distort markets and, potentially, steer them in an inefficient direction.

Hansen closed the forum by acknowledging the frank exchange of ideas among the panel members, and stressed the importance for such dialogue to continue. “All of our work, from academia, the government, and the private sector, is made more effective when there are open lines of communication,” Hansen said, following the forum. “For academic scholars like me, there is great value to understanding both private and public sector perspectives to help direct research toward important questions that will have a real long-term impact. Policymakers similarly benefit from insights from the best scholarly research, while the private sector gains from advances in knowledge and understanding generated from academic environments.” 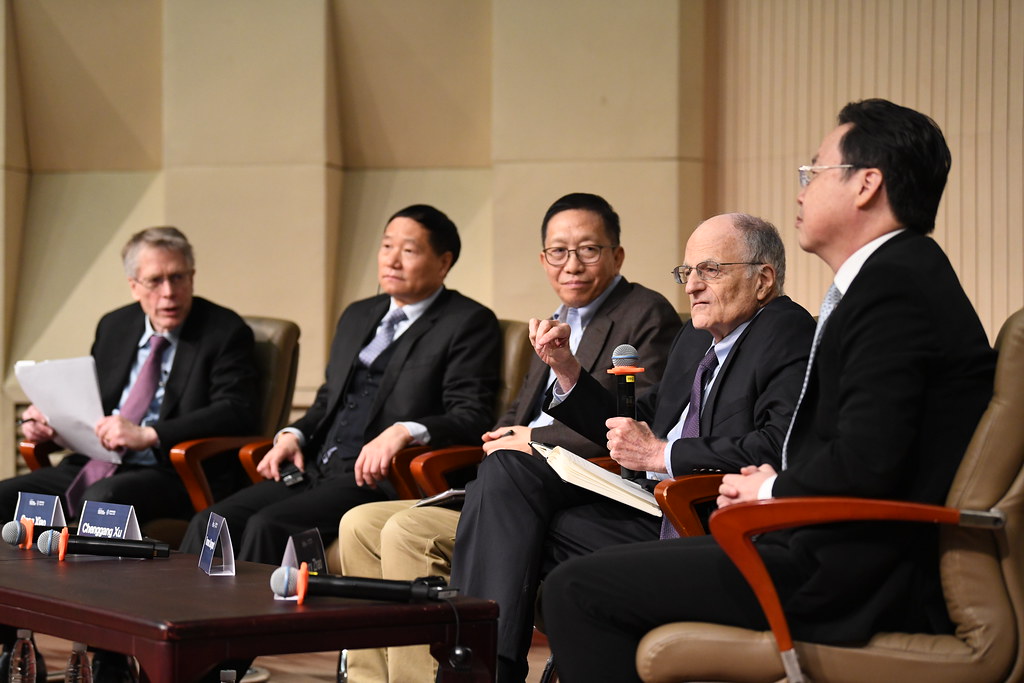 Policy Discussion: Challenges in Finance and the Macroeconomy in China