When researchers measure or track national economies, they do so by relying on a system of accounts that records how production is distributed among consumers, businesses, governments, and foreign nations. Pioneered nearly a century ago, these measures are formalized in the System of National Accounts (SNA), which incorporates a set of internationally agreed concepts, definitions, classifications, and accounting rules.

A Look at the Disaggregated Circular Flow of Money in Denmark

A Look at the Disaggregated Circular Flow of Money in Denmark

What we see here is not a map of Denmark, however it is strikingly similar to the country’s geography. In fact, this figure contains 5,390 nodes, one for each consumer and producer subgroups in Denmark.

The authors develop “disaggregated economic accounts” for Denmark using various transaction and government microdata, including region-by-industry subgroups of consumers and producers, capturing rich heterogeneity in flows and shock incidence across regions and industries to present facts on the circular flow of money across subgroups.


Some nodes are found to be central in the graph. For example, here we see the finance and telecommunication industries in Copenhagen.


Different colors in the figure represent the 98 municipalities of Denmark.


For instance, red is an indicator of consumers and producers in Copenhagen.

This analysis of disaggregated economic accounts substantially enriches our understanding of shock propagation and may aid in the design of policy interventions.

While useful for tracking broad measures like national consumption, income, and output, the SNA offers no system to comprehensively document bilateral consumption and income flows between disaggregated consumer and producer groups, only between producer groups. Put another way, the SNA contains little data measuring flows between smaller subgroups of the economy, like which consumers purchase goods from which producers, which producers pay income to which consumers, and how consumers and producers transact with the government and the rest of the world.

No mere technocratic issue, this absence of comprehensive disaggregated economic accounts has direct and important implications for policymakers. With an incomplete understanding of how shocks propagate across the economy, and of how they heterogeneously affect aggregate and distributional outcomes, policymakers are limited in their ability to set focused policies. Instead, policymakers must rely on broader policies that may miss the mark or otherwise result in unintended consequences.

This new research addresses this gap. The authors develop “disaggregated economic accounts” for Denmark using various transaction and government microdata, including region-by-industry cells of consumers and producers, capturing rich heterogeneity in flows and shock incidence across regions and industries (see disaggregatedaccounts.com), to present facts on the circular flow of money across cells, including the following: 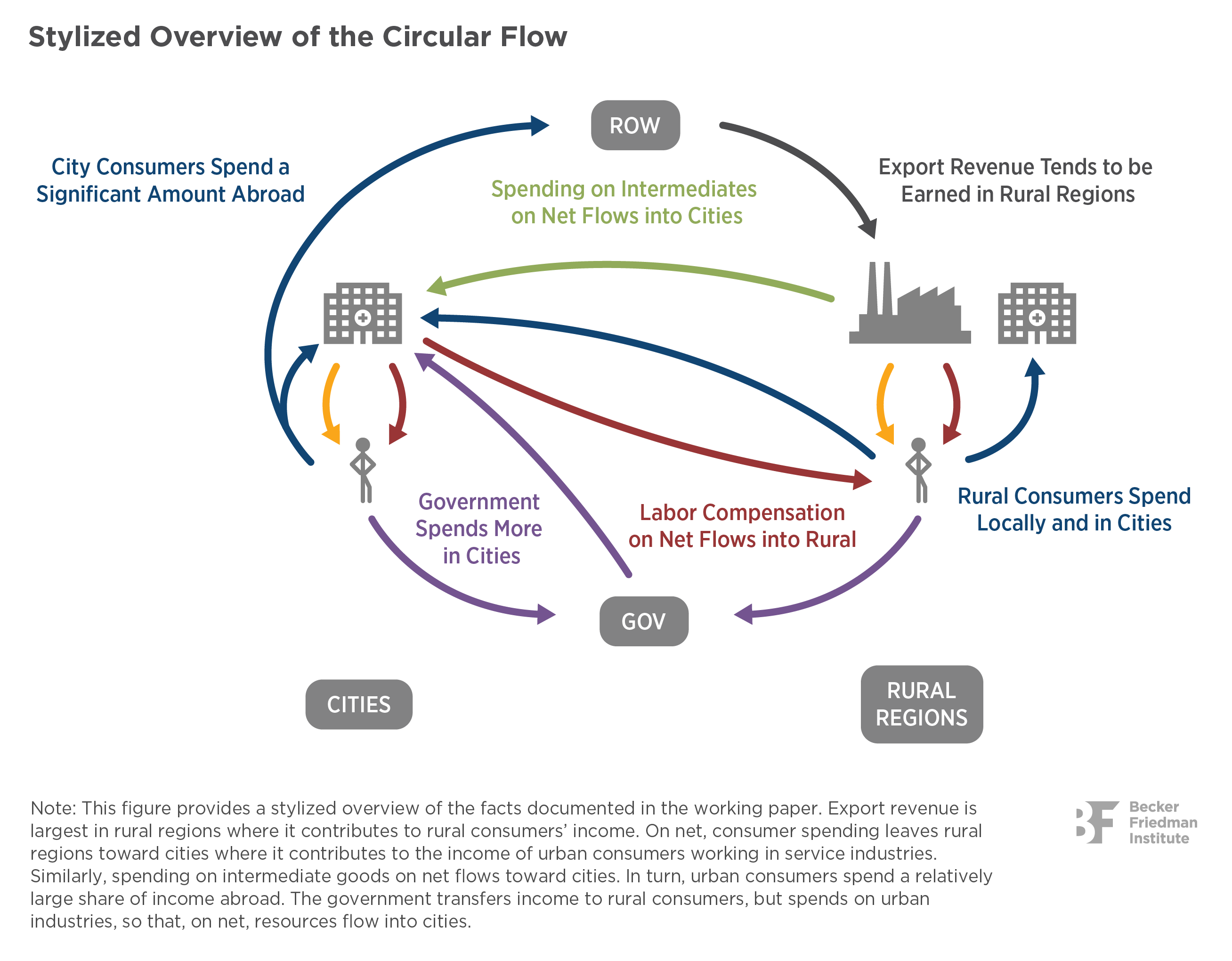 The authors also develop a model that allows them to study how shocks propagate across region-industry cells, improving on empirical analysis that typically cannot disentangle all general equilibrium1 propagation channels. In their application of the model, the authors focus on the aggregate and distributional effects of export demand shocks to find that: