In the wake of a series of tragic incidents in recent years, police reform has become a central societal concern. This new research documents how LAPD officers responded to police reforms, and focuses on three key dates: 1998, when the first reform was introduced, which triggered an internal investigation for every complaint; 2001, when the Department of Justice ordered better documentation and more timely compliance; and 2002, when reforms were weakened such that commanding officers could dismiss complaints deemed frivolous. 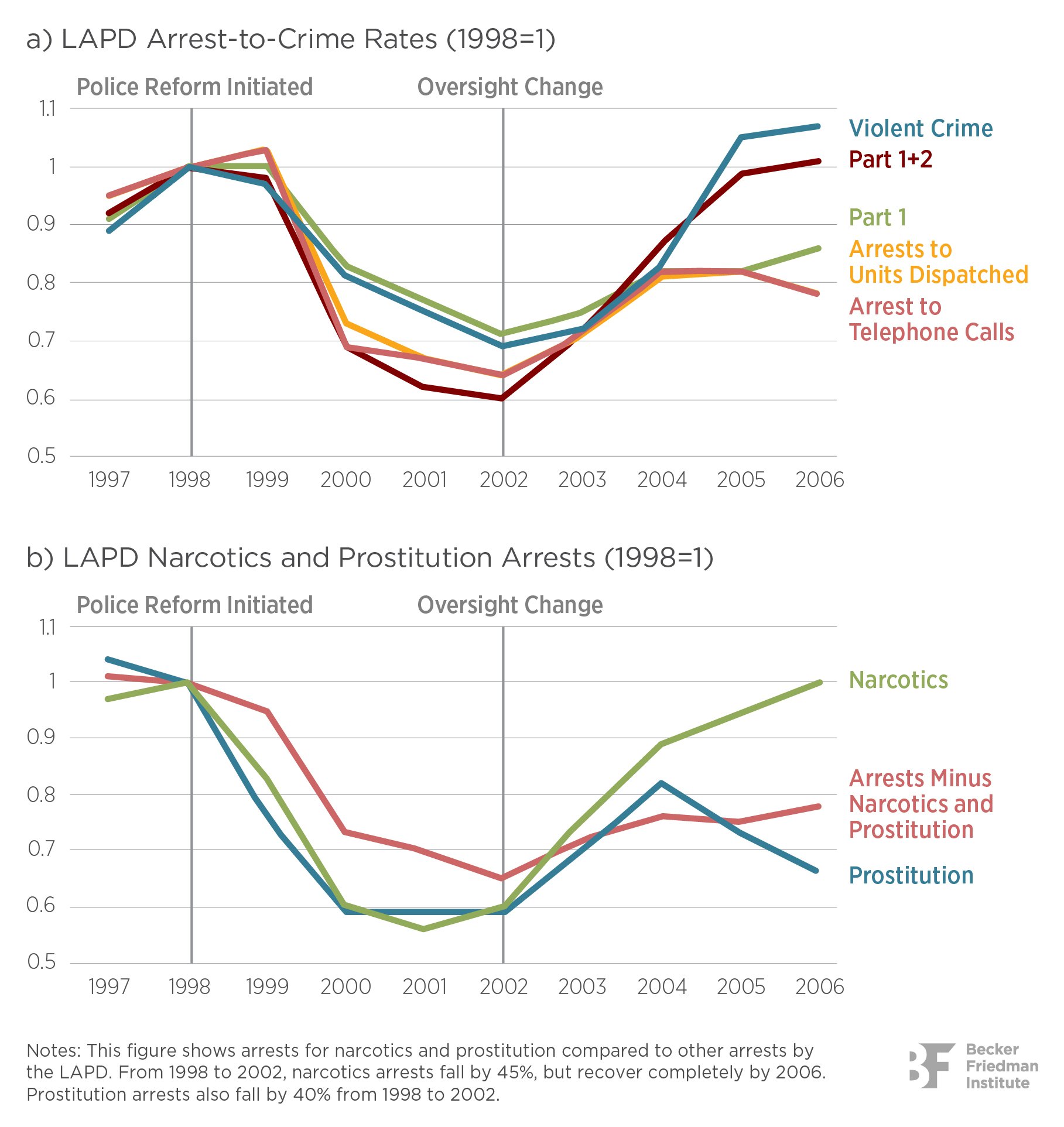 How does such a dynamic play out in the data? The arrest-to-crime rate fell enormously after the first oversight change: by 40 percent from 1998 to 2002 for all crimes (those with victims, known as Part 1, and victimless, Part 2), and by 29 percent for Part 1 crimes. When oversight was reversed in late 2002, arrest rates immediately increased and the rate for all crimes returned to its 1998 level by 2006. The Part 1 arrest rate reversed by half of the initial decline. Prendergast interprets these outcomes as evidence of “drive and wave” disengagement, and he cites contemporaneous officer reports that corroborate this description. Of note, there were no such changes in arrest rates for neighboring jurisdictions of the Los Angeles Sheriff’s Department over the same period.

To test or check his “drive and wave” hypothesis, Prendergast first looks at differences across crimes to see if officers appropriately respond and investigate. For Part 1 crimes, which have victims (say, a burglary or assault), officers are more inclined to respond, especially as these cases are typically called into a station, leaving a record. By contrast, Part 2 crimes, (like narcotics and prostitution) often rely on the officer witnessing the crime. In line with Prendergast’s “drive and wave” insight, narcotics arrests fall 44 percent from 1998 to 2001, and then increase by that amount afterwards.

By failing to investigate crimes in a way that led to arrests, police harmed the victims of those crimes. Prendergast argues that the oversight changes created an imbalance in which the voice of victims in police oversight was largely ignored.  This observation offers implications for the current debate on police reform. In particular, it shows that enhancing oversight by suspects without strengthening the voice of victims may backfire.