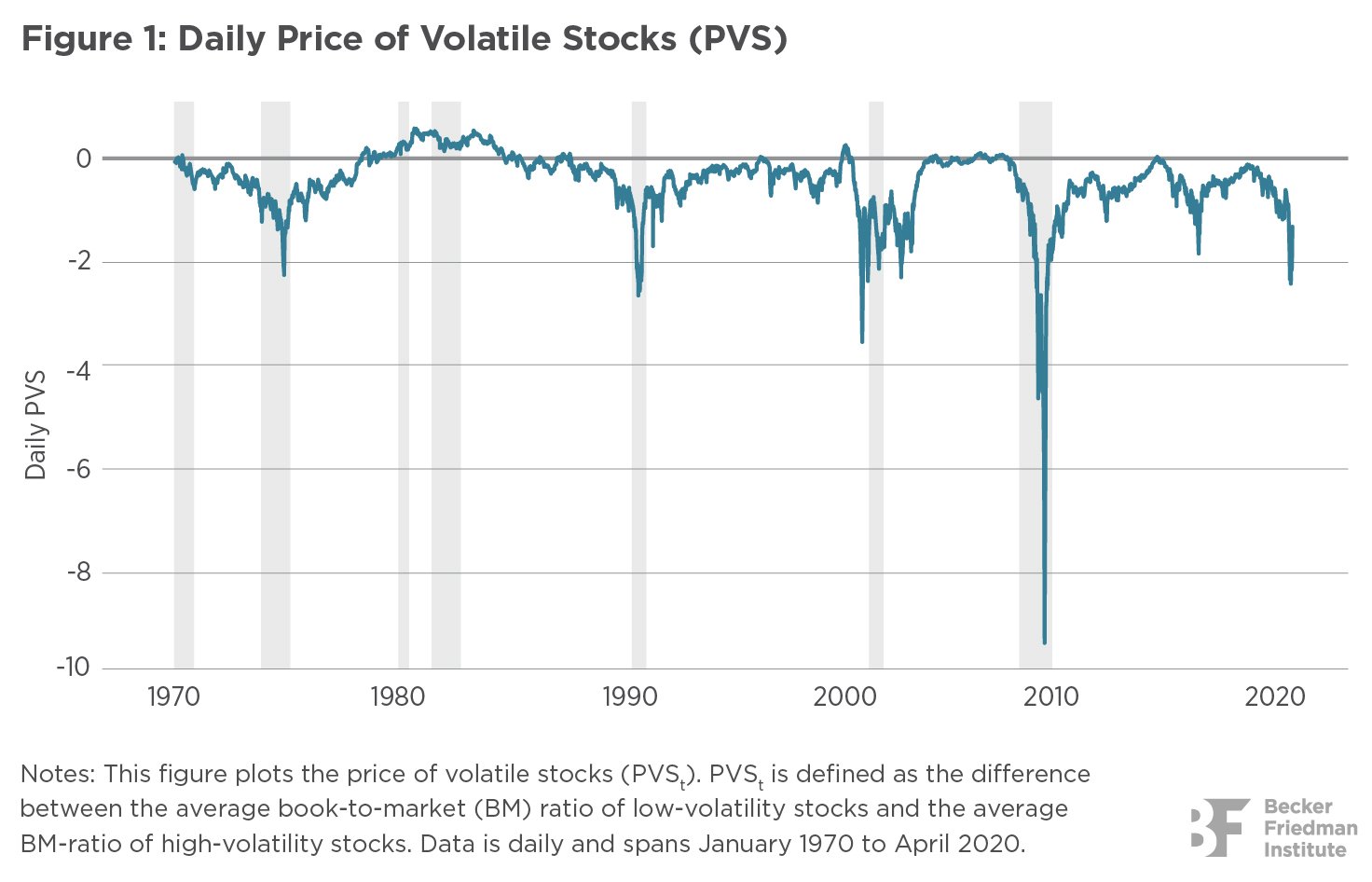 Financial markets have fluctuated significantly as the COVID-19 epidemic has progressed.These fluctuations likely reflect both the anticipation of a steep drop in corporate earnings, as well as a reassessment of the risk of business investment. It is important to separate these two factors because upward revisions in risk perceptions can themselves reduce investment, deepening and prolonging the recession.

To understand movements in risk perceptions relevant for the macroeconomy in near real-time, the authors employ the “price of volatile stocks” (PVSt)1, which is the book-to-market ratio of low-volatility stocks minus the book-to-market ratio of high-volatility stocks. In previous work, the authors showed that PVSt is low when perceived risk directly measured from surveys and option prices is high. Further, using time-series data from 1970 to 2016, the authors showed that when perceived risk is high according to PVSt, future real investment tends to be lower because the cost of capital is higher for risky firms.

Figure 1 shows a daily time series of the authors’ measure of perceived risk, PVSt, from 1970 and through April 2020. It shows the price of volatile stocks fell sharply – and hence perceived risk rose sharply – as news about COVID-19 was hitting US markets and households in March 2020. PVSt reached its low for the year on April 3, 2020, when it was down 2.6 standard deviations from its level at the start of 2020. While this decline is large, it is comparable to movements in risk perceptions in prior recessions, particularly the downturn following the dotcom bubble in the early 2000s. It is also much smaller than the move in risk perceptions during the financial crisis of 2008-2009. Estimates for the period 1970-2016 indicate that a move in risk perceptions of the size experienced from the beginning of the year until this trough has typically been associated with a drop in the natural real risk-free rate of 3.3 percentage points, and a decline in the ratio of economy-wide capital expenditures to total assets of ratios of 0.91 percentage points (relative to a pre-2016 standard deviation of 1.16%).

Figure 2 provides a close-up view of PVSt and the aggregate stock market during the COVID-19 pandemic (February 14, 2020 through April 30, 2020). The figure shows that PVSt is useful for interpreting individual events during the COVID-19 crisis and often contains information that is distinct from the aggregate stock market. One thing that stands out from this figure is that the steep drop in the aggregate stock market at the end of February left PVStalmost completely untouched, implying that perceptions of risk had not changed significantly. In other words, the evolution of PVSt at the onset of the crisis suggests that investors initially believed there would be a short-term decline in earnings, but did not believe there would be an amplification effect from heightened risk perceptions to the aggregate economy. However, PVSt and the aggregate market began to drop in tandem around March 11, the day the WHO declared COVID-19 a pandemic and wide-spread international travel restrictions were imposed. One possible interpretation for this decoupling and recoupling is that COVID-19 initially appeared to affect only the short-term cash flows of internationally connected firms, whereas the spread of the virus and the associated policy measures imposed in mid-March affected the risk outlook for a much broader swath of the economy. These trends were in turn reflected in the prices of volatile stocks.

Another striking feature of Figure 2 is the large increase in PVSt that began on April 21, 2020, the day that the United States Senate passed the Paycheck Protection Program and Health Care Enhancement Act. The bill provided nearly $500 billion in additional funding to support the CARES Act, much of which was geared towards aiding small and medium-sized businesses. PVSt increased nearly 0.66 standard deviations between the time that the bill was passed in the Senate and when it was signed into law by President Trump on April 24. Interestingly, the market-to-book ratio of the aggregate stock market increased only 0.17 standard deviations over the same time period. The differential response of PVSt and the aggregate stock market to the passing of the bill is consistent with the authors’ previous interpretation that PVSt reflects perceptions of risk that are relevant for privately owned firms, which tend to be smaller and riskier than the larger, less volatile publicly traded firms that dominate the aggregate stock market.

1  As developed in Pflueger, C., E. Siriwardane, and A. Sunderam (2020). “Financial market risk perceptions and the macroeconomy.” Quarterly Journal of Economics, forthcoming. 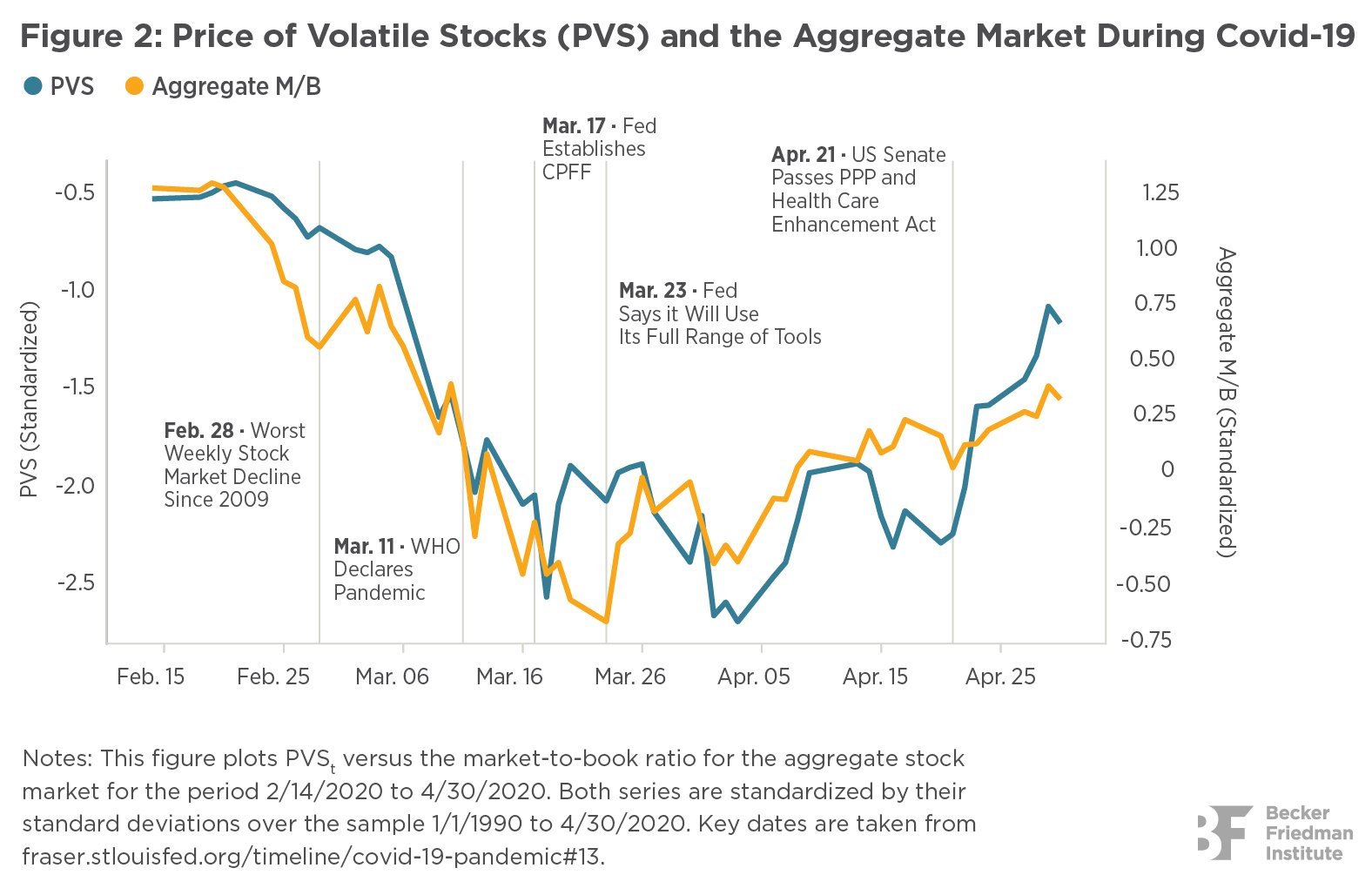 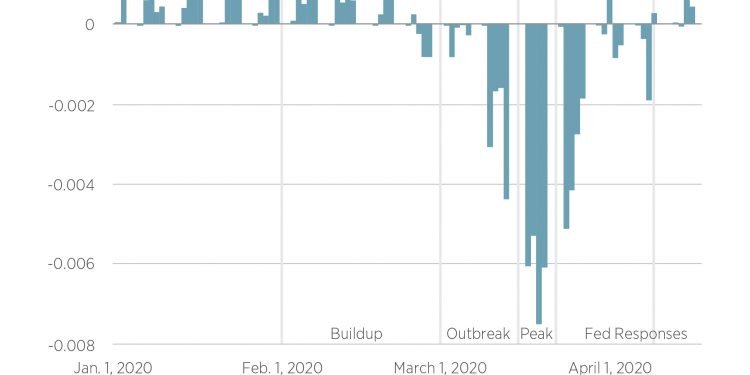 Financial Fragility in the COVID-19 Crisis: The Case of Investment Funds in Corporate Bond Markets