Before COVID, most people probably spent little time thinking about how many inputs were part of the products that they bought, or from where those inputs originated. However, with the onset of the pandemic and the sudden closure of manufacturing plants around the world, the term “supply chain” suddenly became part of our daily lexicon. Empty shelves in retail stores? Must be supply chain issues. Can’t order a new microwave for months? Supply chain. Depleted auto sales lots? You guessed it.

As COVID illustrated, with production organized around global value chains and with different production stages located in different countries, existing trade models and domestic policy have become increasingly complicated. Researchers have long understood firms’ incentives to import inputs and locate assembly plants around the world; however, that understanding comes from studying each activity in isolation. Most work on horizontal or export platform foreign direct investment (FDI), for example, assumes that assembly only uses local factors of production, while most work on global sourcing or vertical FDI often has final goods that are either non-tradable or perfectly tradable. In part, these choices were made due to theoretical considerations and, importantly, to data limitations. 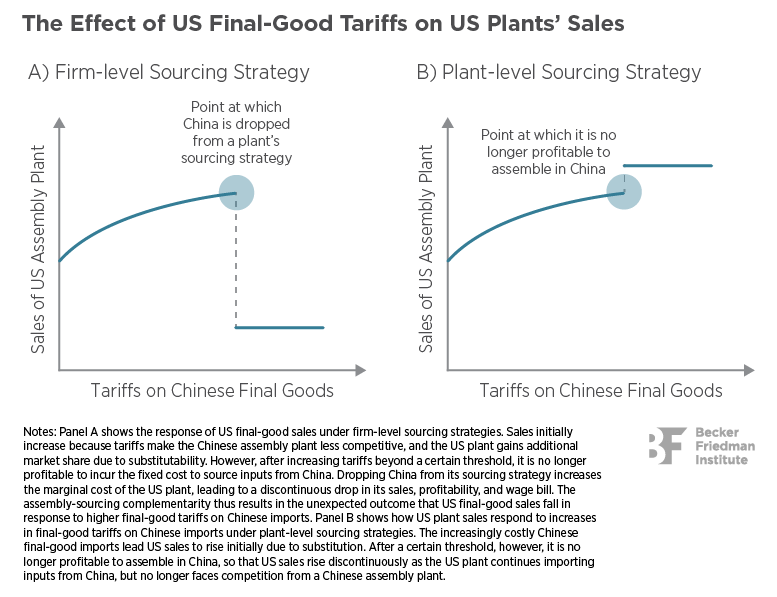 In this paper, the authors develop a unified framework to study how changes in trade costs, productivity, or demand affect firms’ global production and trade decisions in other countries, and they overcome prior data limitations by combining US data on firms’ detailed trade transactions with country-level information on multinationals’ affiliates and ownership. These new data show that multinational firms (MNEs) account for most manufacturers’ imports and exports, and that their import and export decisions are oriented not only toward countries in which they have foreign affiliates, but also toward other countries in their affiliates’ region. In particular, the authors’ data reveal the following:

What, then, is the relationship between MNE’s trade and FDI decisions? How are these decisions affected by foreign affiliate or foreign headquarter locations? Focusing first on imports, the authors find:

These results thus provide new evidence that firms’ global sourcing strategies are oriented towards those regions in which they have multinational activity, and that for US MNEs, this reorientation is driven solely by variation in their extensive-margin import decisions. Regarding exports, the authors find:

Addressing this theoretical gap, the authors then develop a multi-country model in which firms jointly decide on their assembly and global sourcing strategies. Please see the full working paper for description of the model and how it improves upon existing frameworks, but we note here that the authors’ model delivers novel predictions on the effects of trade cost changes from, say, tariff increases on MNEs’ imports and foreign affiliate sales. Just as in the real world, the authors’ model reveals the interdependence of firms’ extensive margin sourcing and assembly decisions; in other words, they are not limited to plant-level fixed costs as in existing models.

For researchers and policymakers, this work highlights the importance of incorporating the authors’ new source of firm-level scale economies when studying the effects of trade cost changes in a globalized world with complex supply chains. One important example: This new framework can better describe how tariff changes ripple through economies as they influence the distribution and scale of firms’ global operations.