By 2016, the United States had surpassed 100,000 deaths annually from alcohol- or drug-induced causes, with more than 90 percent of the deaths occurring among the nonelderly, and these levels increased in 2020 and at least through mid 2021, up to about 30 percent over trend. This paper investigates whether changes in regulatory and government spending policies, especially including increases in unemployment insurance (UI) payments, affected drug and alcohol mortality rates. 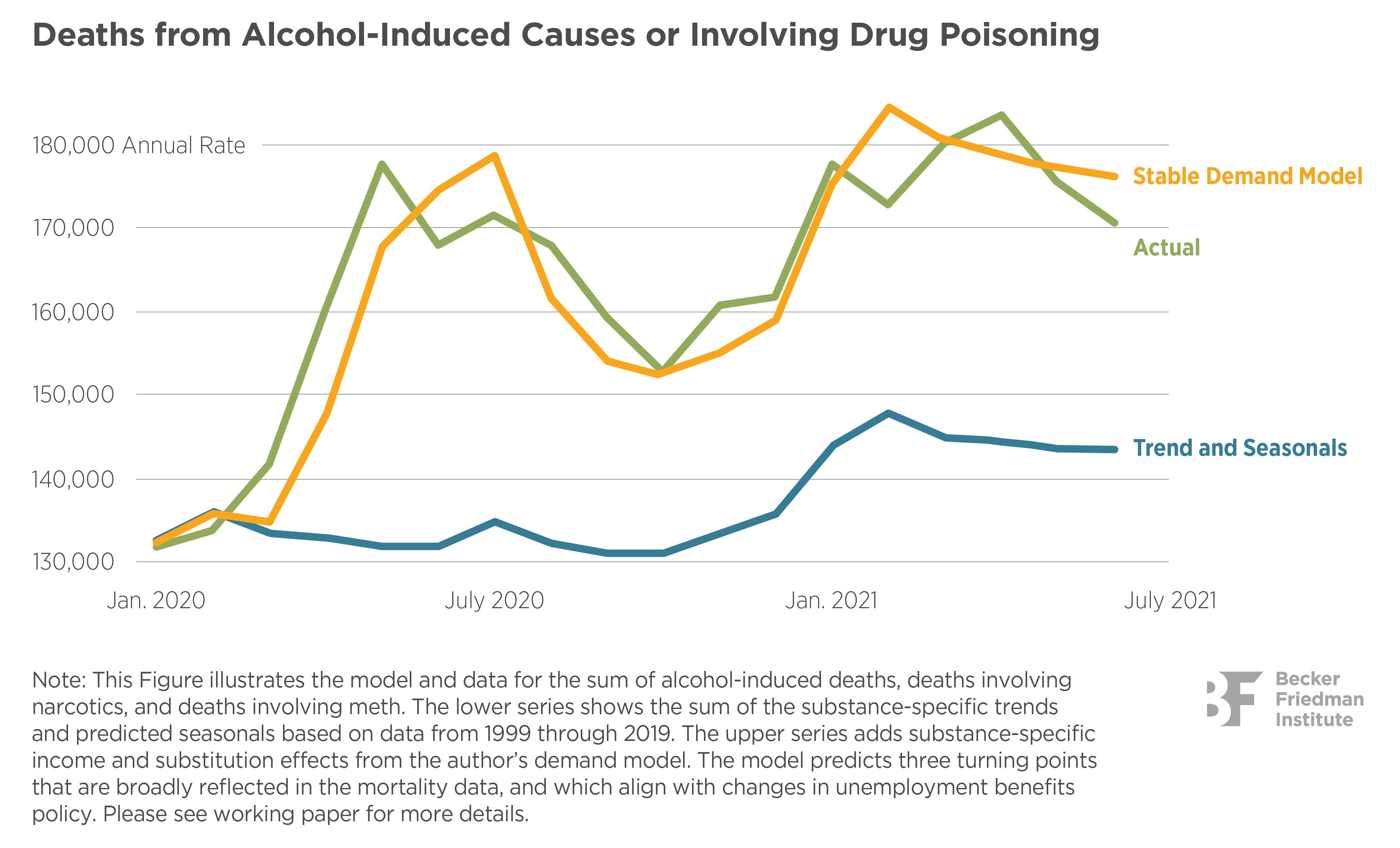 Mulligan constructs a model that documents changes in disposable income, marginal money prices of drugs and alcohol, and the full price of (especially) drugs as it relates to the value of time. In other words, if we assume that people’s preference for drugs and/or alcohol stays the same, their demand for such products would vary with, say, variations in income, price, and other demand factors. Mulligan’s model incorporates this insight to investigate whether and how demand factors vary over time, across substances, and across demographic groups, and then makes predictions on the timing and magnitude of mortality changes by substance. This novel model yields the following findings:

Importantly, these findings do not contradict or confirm observations that the pandemic elevated feelings of depression and anxiety. However, these results do challenge the thesis that alcohol and especially drug mortality during the pandemic were primarily driven by new feelings of depression or loneliness. Suicide did not increase in the United States, while drug mortality fell sharply in the months between the $600 and $300 unemployment bonuses.  To the extent that pandemic depression and loneliness initiated new drug and alcohol habits, they might not yet be reflected in the mortality data but will elevate mortality in the years ahead.

Mulligan stresses that there are many outstanding questions about drug markets during the pandemic that demand attention, and that research into other countries and markets could bring useful insight. Also, future research may show that the theoretical approach of this research yields results more in line with coincidence than predictability. Even so, if the income and substitution effects described in this work are not important factors, then researchers are left with profound puzzles, including: Why do overall alcohol and drug deaths increase significantly while suicides and fatal heroin overdoses decrease? Why do deaths involving psychotropic drugs (especially meth) increase in lesser proportions than both alcohol and narcotics deaths, even while some important narcotics categories do not increase? And why do mortality rates change across age groups?