One of the notable trends in the US manufacturing sector in recent decades has been a pronounced increase in concentration and markups, with one key exception—the consumer-packaged goods (CPG) industry. Dominant national brands of the past half century have actually experienced falling sales and decreasing market shares at the hands of smaller CPG firms. 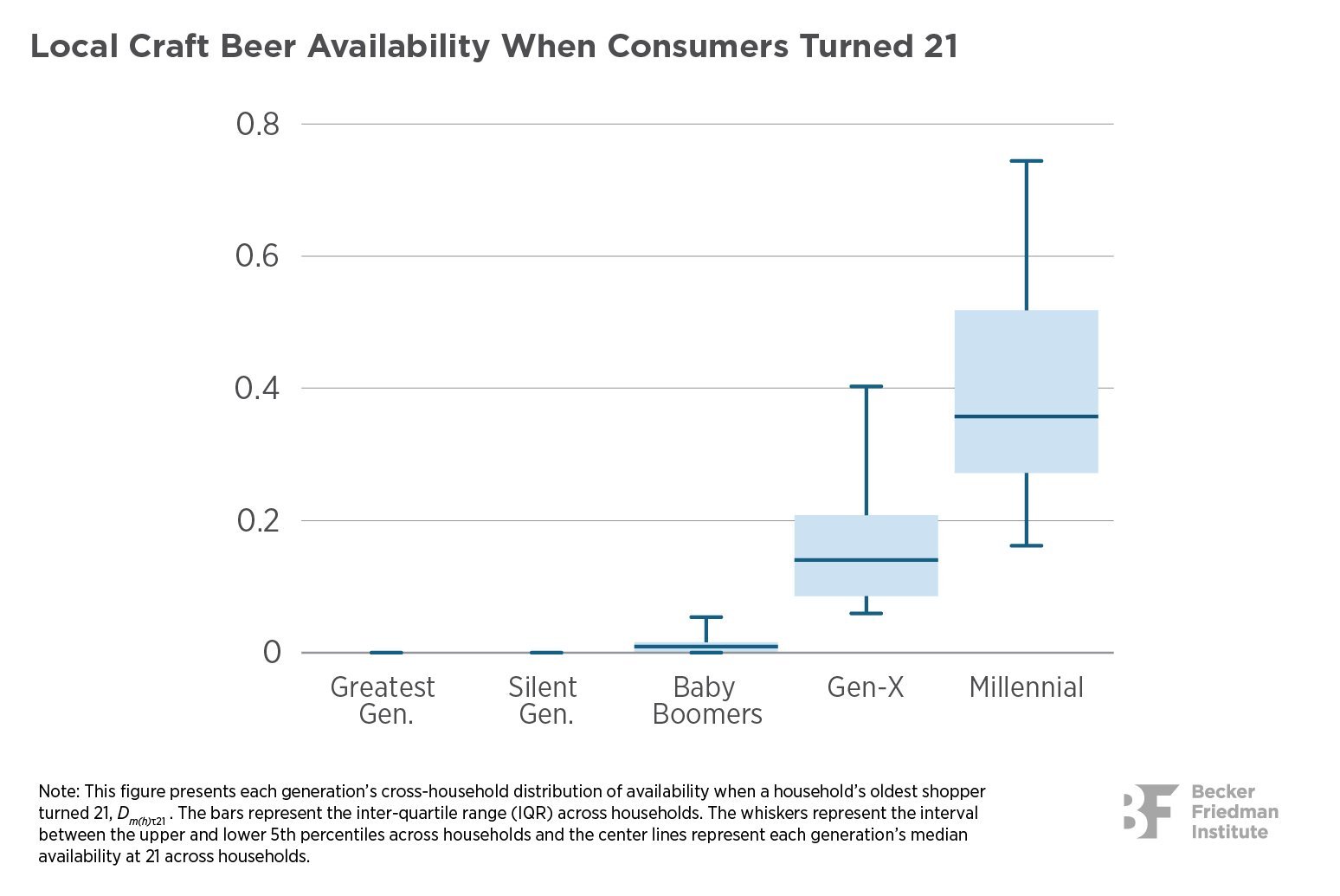 In 2018, 16,000 smaller CPG manufacturers accounted for 19% of all US CPG sales, an increase of 2 percentage points ($2 billion) over the previous year. That same year, the 16 largest CPG manufacturers accounted for 31% of CPG sales, down from 33% five years earlier. This rapid growth of smaller brands represents a striking, structural break in the historically high and persistent concentration of CPG categories and the dominance by large, national brands.

What accounts for this shift? Industry experts routinely point to a demand-side explanation, identifying the generation of Millennials—consumers born after 1980—as the leading cause of this decline in the sales of established brands, often citing surveys that reveal a preference for smaller brands among younger consumers. However, this theory lacks a mechanism for understanding why Millennials might form intrinsically different tastes from older generations.

This new research proposes an alternative idea. While placing their hypothesis within the context of existing consumption capital theory and maintaining the neoclassical assumption of stable tastes, the authors posit that generational differences in behavior reflect heterogeneity in the accumulation of consumption and brand capital. Older generations of consumers had already accumulated decades of consumption capital with established, national brands by the time that new craft and artisanal CPG products started to enter. In contrast, the younger Millennial generation of consumers often had access to both craft and established national brands as they started to form their shopping habits.

The authors look to the US beer industry to conduct an empirical test. They study the take-home segment in the US beer industry, one of the leading examples of an industry disrupted by the sudden emergence of craft brands, which grew from $10 billion to $29.3 billion between 2010 and 2019. Surveys indeed find a striking generational share gap with half (50%) of older Millennials (25-34) drinking craft beer, in contrast with 36% of US consumers overall. As with other CPGs, Millennials may value the perception of higher quality for craft beer. 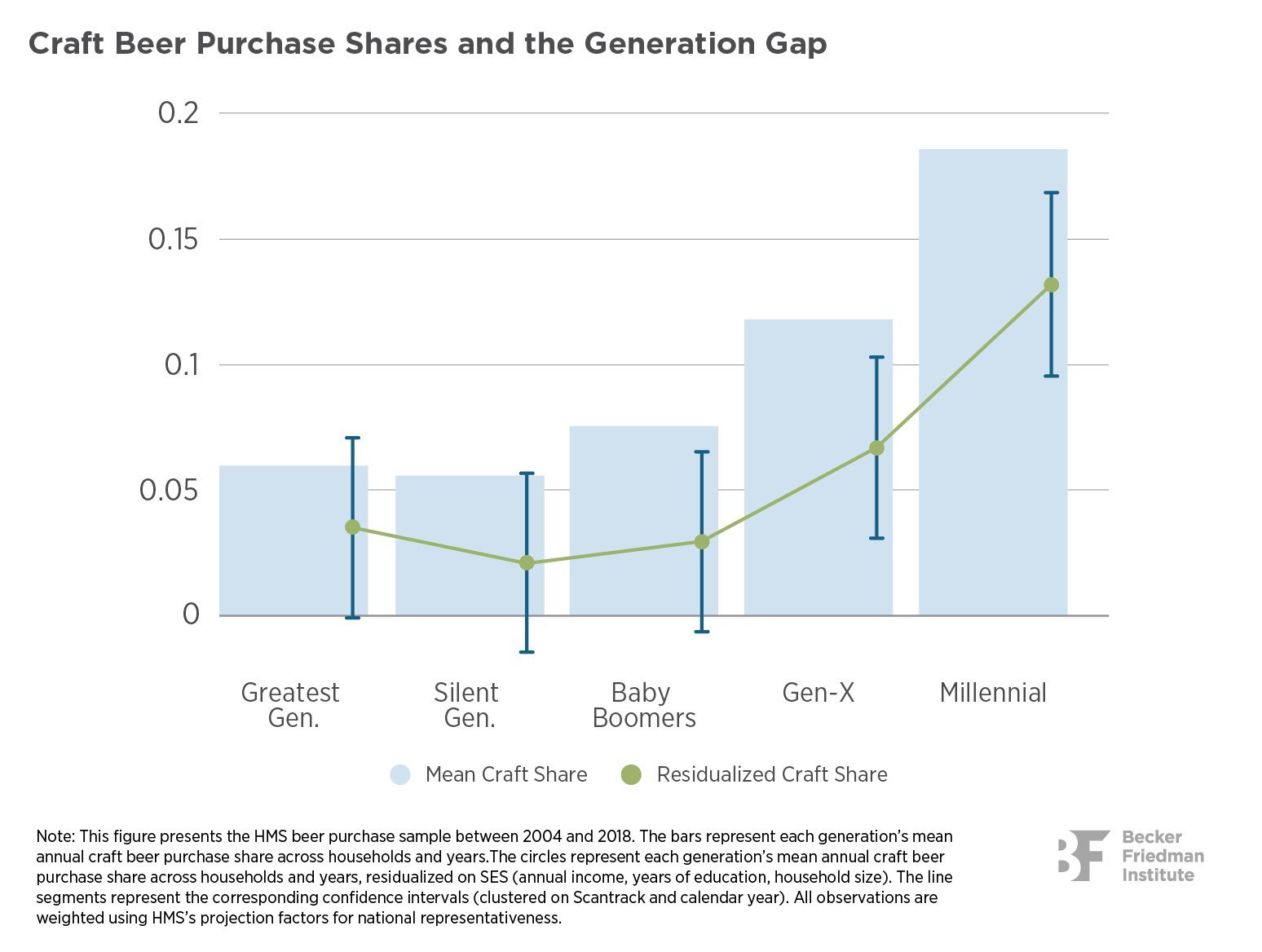 The authors manually assembled a novel database from various industry sources that tracks the history of all the craft beer brands sold in the US, which allowed them to exploit the geographic differences in the timing and speed of diffusion of new craft beer brewers and local availability of craft beer. They also employ a national database containing the 2004-2018 purchase activity for a nationally representative shopping panel of over 100,000 U.S. households.

Among other findings, the authors show that 85.3% of the generational share gap is explained by consumption capital. Therefore, while Millennials buy craft beer at higher rates than older consumers, the differences in intrinsic preferences cannot account for the disruption to the market structure of established beer brands. Instead, generational differences in craft beer demand are mostly an artifact of generational differences in the historic availability of brands during early adulthood. Put another way, it is not so much that Millennial beer drinkers have different tastes than, say, Baby Boomers, it is more that Millennials were exposed to craft beers when they entered adulthood.

Importantly for the beer industry, this work suggests sustained growth in craft beer share, reaching almost 30% of the market by 2030, reflecting the changing composition of beer consumers as older generations die and a new generation of new adults—Generation Z—enters the market and forms beer preferences.