Skip to content
Chart
Device Exposure is Down by Two-Thirds 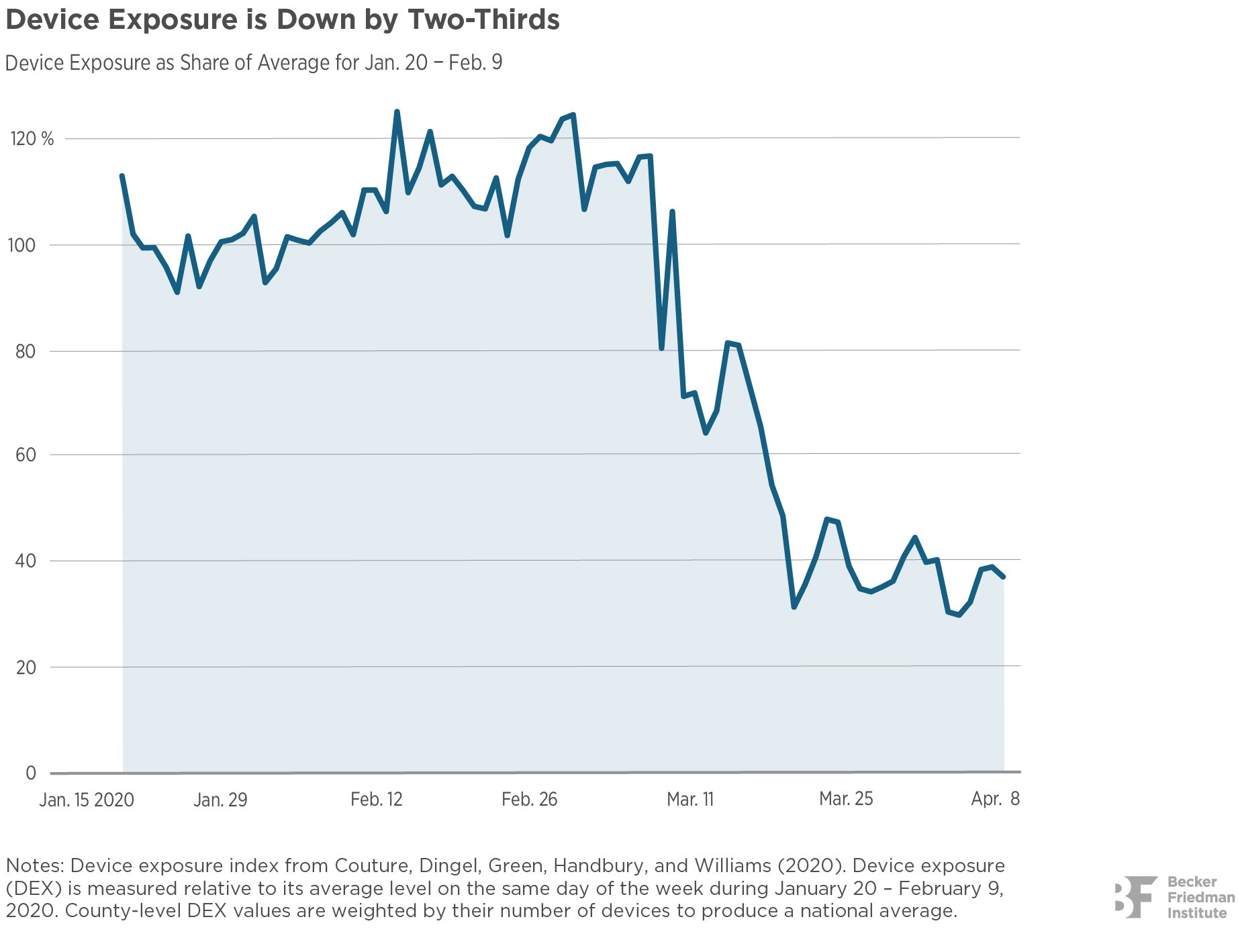 Throughout the United States, large swathes of economic activity and social life have been paused due to the pandemic. Data based on smartphone movements reveal this abrupt shift and can be used to study—almost in real-time—how people are altering their behavior during the coronavirus pandemic. A team of economists from five different universities that includes Chicago Booth’s Jonathan Dingel has published indices derived from anonymized phone data to allow researchers to use this information.

One of the team’s indices describes a device’s exposure to other devices due to visiting the same commercial venue. This daily device exposure index (DEX) reports the average number of distinct devices that also visited any of the commercial venues visited by a device on that day. Nationwide, the DEX declined dramatically over the month of March. By late March, device exposure was about one-third the level typically observed in February.

Thanks to the smartphone data’s rich detail, device exposure can be measured on a daily basis for more than 2,000 US counties. While exposure is down by two-thirds on average, there is considerable variation in the degree of isolation across US cities. On April 3, the device exposure indices in New York City and Las Vegas were merely one-tenth their Valentine’s Day levels. By contrast, the DEX for Cheyenne, Wyo., declined by only 40%. Across metropolitan areas, the decline in device exposure was greater in cities where a larger share of jobs can be done at home.

While the correlation between reduced device exposure and a greater share of jobs that can be done at home does not establish a causal relationship, this finding illustrates just one of numerous questions that can be investigated using these exposure indices made available to the global research community by the team of economists. The data are available online at https://github.com/COVIDExposureIndices/. 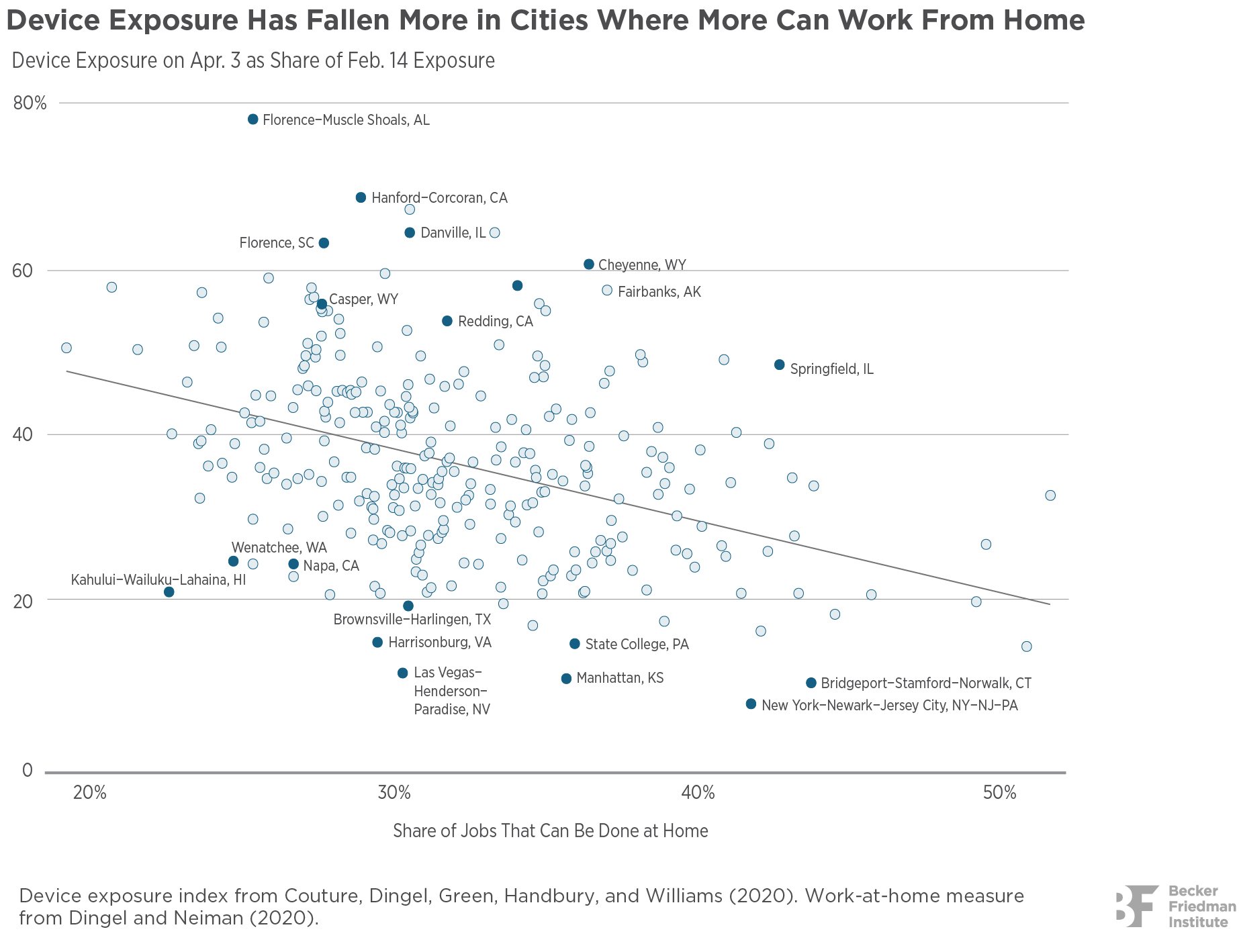 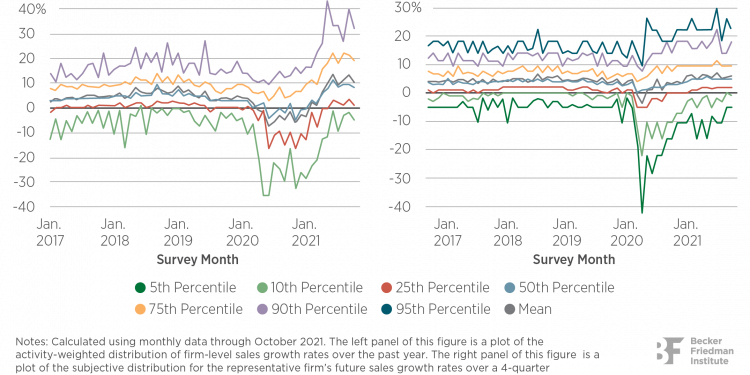 Internet Access and its Implications for Productivity, Inequality, and Resilience

Jose Maria Barrero, Nicholas Bloom, Steven J. Davis
Moving to high-quality, fully reliable home internet service for all Americans would raise earnings-weighted labor productivity by an estimated 1.1% in the coming years, with implied output gains of $160 billion per year, or $4 trillion when capitalized at a 4% rate.
Topics:  COVID-19, Employment & Wages