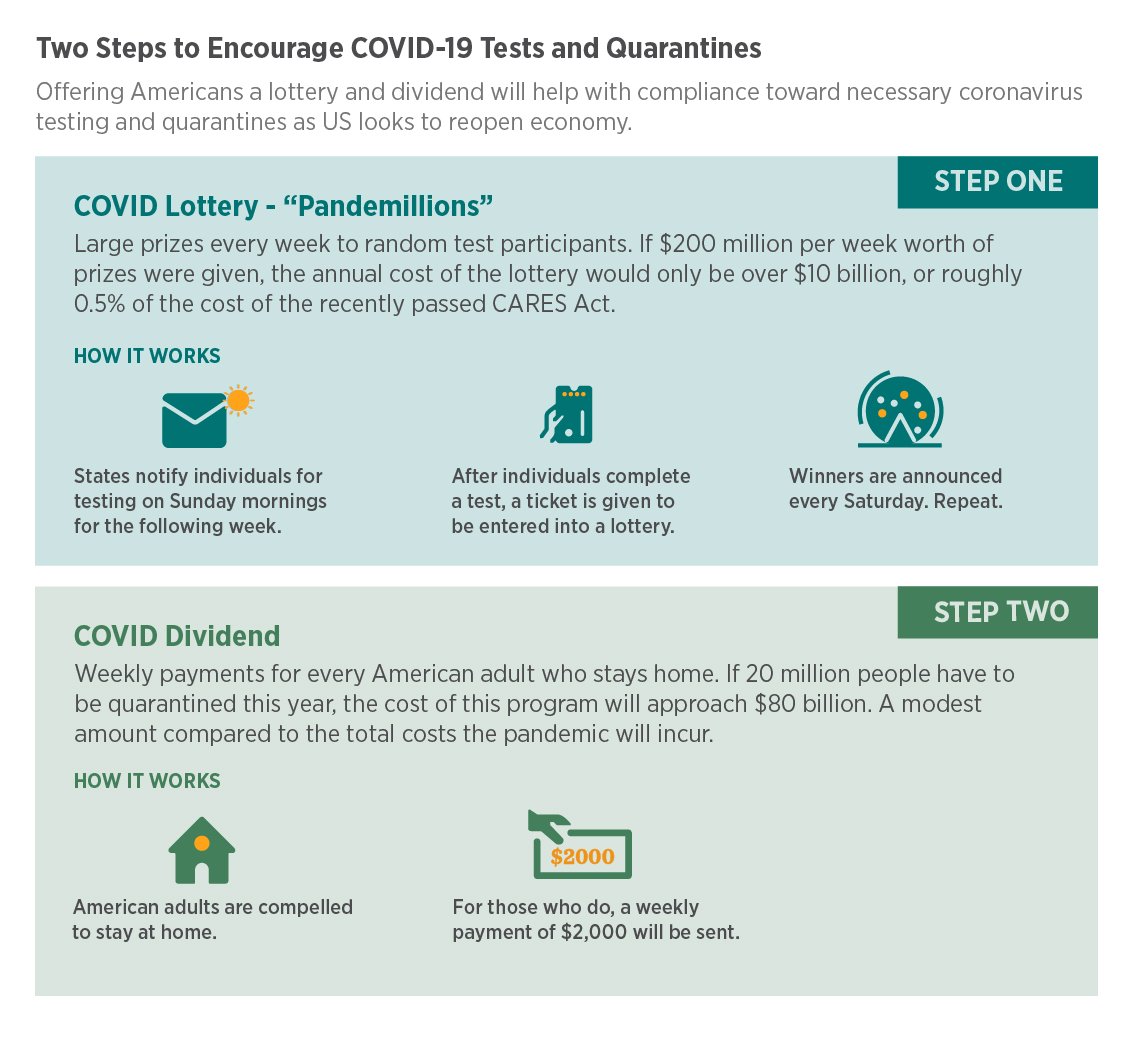 Testing for COVID-19 is only as good as compliance. If people don’t show up for testing, or if only symptomatic people show up, then the benefits of such a program will be lost, as “silent spreaders” will go undetected. Indeed, costs could increase under such a scenario if people are encouraged to re-engage in the economy under the false promise of such a testing program.

The question, then, is how to encourage healthy people to stand in line with, possibly, sick people, to undergo an uncomfortable test, and then return in two weeks to do it again, and for many weeks after that. The answer lies at the heart of economics—incentives—and the authors offer a unique suggestion: a COVID lottery (which they coin “Pandemillions”) that gives away large prizes every week to random test participants. On Sunday mornings, for example, states would notify individuals selected for testing that week, and those people would then have until the end of the week to get tested. A completed test would convert into a “ticket” in the lottery, with winners announced every Saturday night.

The benefits of widespread testing would be large, and the federal government could afford to fund a very lucrative prize pool. At $200 million per week, the annual cost of the lottery would only be only $10 billion, or roughly 0.5% of the cost of the CARES Act. As to implementation, while a federal lottery might be optimal, given that 45 states already manage lotteries, the best path forward might be to use existing state infrastructure.

For those who need incentive to quarantine once they test positive, the authors recommend a second plan: offer a $2,000 weekly payment for every American adult compelled to stay home, even if they are asymptomatic. Based on quarantining up to 20 million people this year, the cost would approach $80 billion, a large but still quite modest sum compared to the total costs of this pandemic.

Strong incentives cause strong reactions, and it is possible that some individuals would purposefully try to contract COVID-19 to receive stay-at-home payments; however, the authors believe this number would be sufficiently low and would not come close to outweighing the program’s significant benefits. The authors also acknowledge that while such payments would likely face political hurdles, the high returns from such a program—in morbidity and mortality reductions, and resources saved—would also prove politically attractive.

Absent a vaccine, which is at best a number of months out, the best way to safely reopen the economy is to establish a testing regimen for COVID-19 which ensures that all individuals—both symptomatic and asymptomatic—get tested on a regular basis.