This seeming hypocrisy stems from the assertion that preferences for individual giving and preferences for societal redistribution are identical. For example, if people are motivated to satisfy moral obligations based only on the degree of personal sacrifice, then people’s willingness to make a sacrifice through individual giving versus through a more progressive tax could be identical. On the other hand, if people trade off preferences for more equal distribution of resources within groups against their own material self-interest, then in large groups people may be more willing to support a centralized redistributive policy than to engage in individual giving. 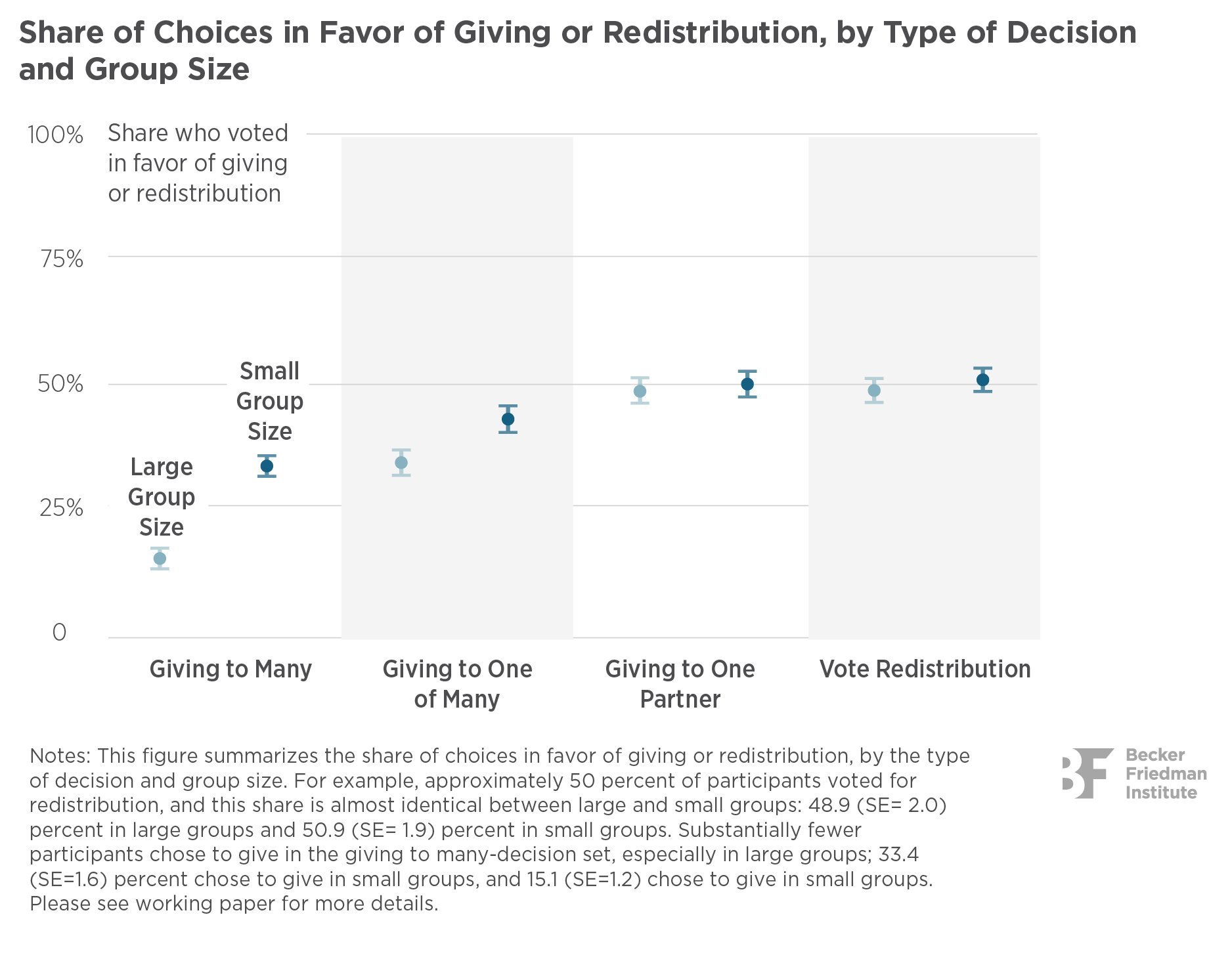 Why do people make this distinction? One reason is that a centralized redistributive policy can have a larger impact on the group-wide allocation at the same cost to oneself. In other words, certain types of other-regarding preferences imply that creating equitable social outcomes is analogous to a form of public goods provision, where many could be better off under a policy that requires contribution from all, but few have an incentive to engage in voluntary giving.

To investigate these and other questions, the authors employ an online Amazon Mechanical Turk (MTurk) experiment, consisting of 1,600 participants who made incentivized choices as “rich” players, in groups with an equal number of rich and poor players. The “rich” were endowed with 350 cents and the “poor” were endowed with 10 cents. The authors varied certain dimensions of the decision-making environment. For example, half of the participants were part of small groups of 4 people, whereas the other half were in groups of 200 participants.

Additionally, the authors varied the cost of transfers so that each participant took part in a total of 9 decisions: 3 decision types x 3 different costs of giving. Finally, the authors varied the framing of individual giving to one participant. In one frame they described the recipient as a “matched partner” while in another frame they described the recipient as a “randomly selected person.” This manipulation was conducted to test the malleability of perceived group size; in particular, to test whether participants who initially started out in larger groups might perceive themselves to be in a small group of two when the recipient is described as a “matched partner,” and thus would be more willing to give.

The authors’ theoretical framework, which offers options beyond the existing literature, can aid future investigations of the types of redistributive mechanisms that can help people implement their taste for redistribution in situations where the desire for voluntary giving is too weak to achieve the equitable outcomes that many desire.