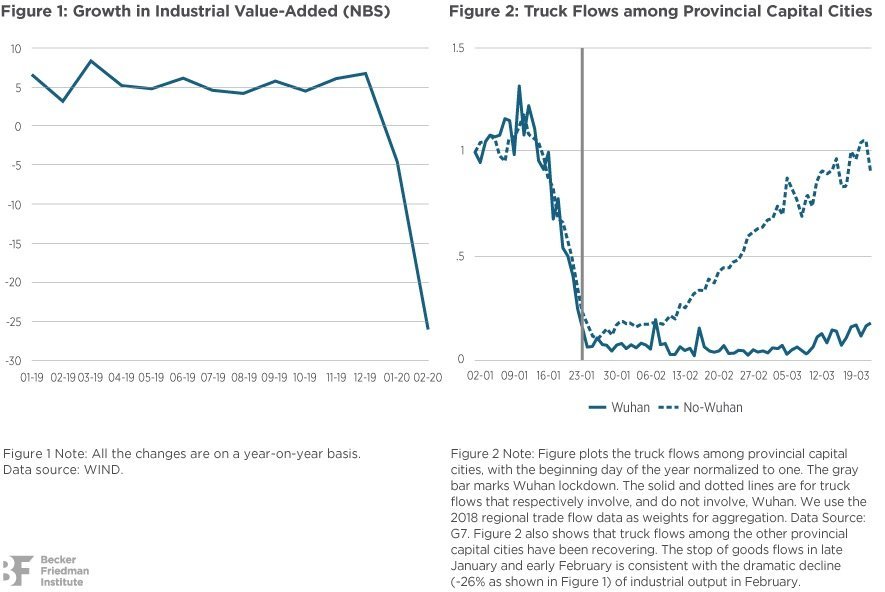 On January 23, the Chinese government locked down the city of Wuhan (Hubei Province). In subsequent days, similar measures were taken in other cities in Hubei and throughout China. This note offers some preliminary gauge on the effect of the measures taken to protect public health on economic activity in China. We will make use of three data sources. First, some official data on industrial output already exists. Second, we make use of data on trucking flows to measure the flow of goods across China. Third, Baidu Map data allow us to estimate the effect on services and worker movements within China.

We begin with official data provided by China’s National Bureau of Statistics (NBS). The most recent data (as of March 23, 2020) is from February 2020. Figure 1 shows that industrial value added fell by 4.3% and 25.9% in January and February of 2020 on a year-on-year basis. If the counterfactual growth in absence of the epidemic is 5.7%, the average growth in 2019, the slump would be even more dramatic.

An alternative data on industrial output is data on shipment of goods across Chinese cities. We have data from a private trucking company that provides logistical services to truck drivers. This company, G7, has real-time GPS data from two million trucks, accounting for about 10 percent of all trucks operating in China. We aggregated the movement of trucks in and out of a provincial capital by day. Figure 2 plots the daily truck flows between provincial capital cities, with the beginning day of the year normalized to one. The decline of truck flows before Wuhan lockdown captures the slowdown associated with the coming Chinese New Year. Strikingly, the truck data suggest that goods flows between Wuhan and the other provincial capital cities remained at a very low level and did not recover at all since the lockdown. 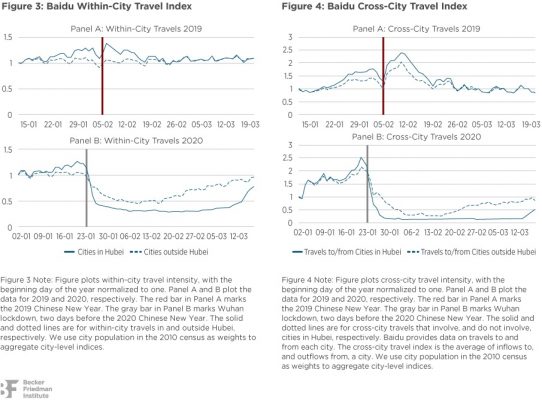 The next data we show are flows of people within and between cities. Here, we use indices of movements of people provided by Baidu. This data is based on “location-based services” (LBS) in Baidu Map. Figure 3 plots within-city travel intensity, with the beginning day of the year normalized to one. Panel A and B plot the data for 2019 and 2020, respectively. The red bar in Panel A marks the 2019 Chinese New Year. The black bar in Panel B marks Wuhan lockdown, which is two days before the 2020 Chinese New Year and exactly precedes the free fall of within-city travels in Hubei. The index dropped by more than half within a three-day window and remained low for six weeks, only to pick up recently until the mid-March. The indices outside Hubei were picking up more rapidly and have almost reached the level in early January.

The movement of people across Chinese cities was more severely affected, as shown in Figure 4. The travels to/from cities in Hubei were nearly frozen. The cross-city travels that do not involve Hubei cities also experienced sharp declines, though to a lesser extent than those involving Hubei cities. In mid-March, the cross-city travels outside Hubei have fully recovered to its early January level.

In sum, the economic impact of lockdown on China is large, severe, and perhaps still mounting despite various massive economic and financial policies that are rolled out by top authorities in Beijing in a timely fashion[1]. China is facing a daunting challenge for its economic recovery at this point, especially because the deteriorating pandemic situation across the globe is bringing an almost complete halt to the export sector in China, and could make it difficult for Chinese firms to access critical inputs provided by firms outside of China.

[1] View related white paper, “Dealing with a Liquidity Crisis: Economic and Financial Policies in China during the Coronavirus Outbreak.”