The American Families Plan under debate in Congress proposes to eliminate the existing Child Tax Credit (CTC), which is based on earned income, and replace it with a child allowance that would increase benefits to $3,000 or $3,600 per child (up from $2,000) and make the full credit available to all low- and middle-income families, regardless of earnings or income. In effect, the CTC would transition from a worker-based benefit to a form of guaranteed income. The authors estimate the labor supply and anti-poverty effects of this policy using the Comprehensive Income Dataset—which links survey data from the U.S. Census Bureau with an unprecedented set of administrative tax and government program data—thus producing more accurate estimates than previous studies. 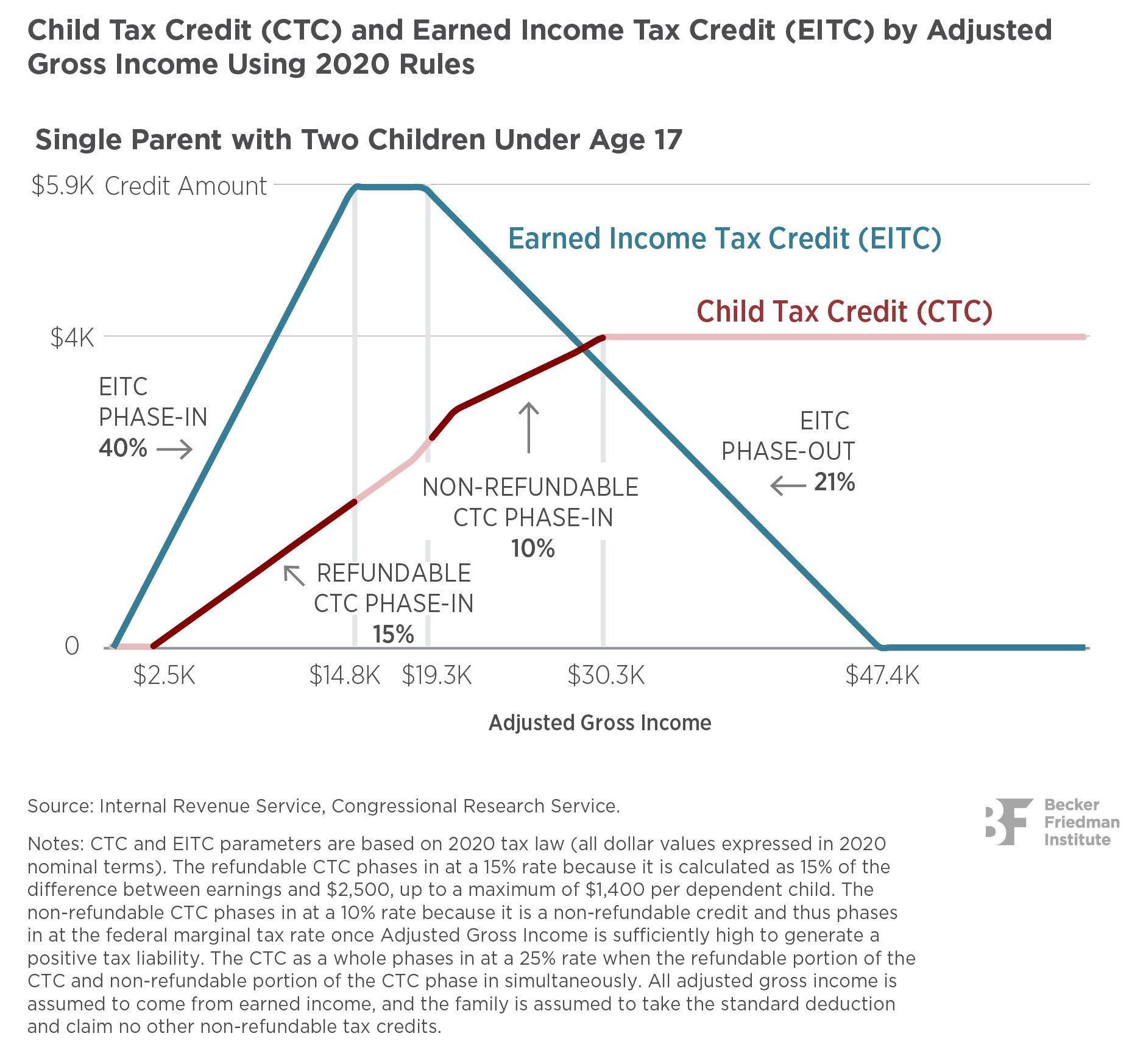 Initially ignoring any behavioral response, the authors estimate that expansion of the CTC would reduce child poverty by 34% and deep child poverty by 39%. The cost for such a program would reach over $100 billion, which exceeds spending on food stamps and the Earned Income Tax Credit (EITC). Given its universal nature, the new CTC would expand beyond the low-income families targeted under current means-tested programs, including the EITC.

The estimated reductions in child poverty could be threatened due to weakened work incentives under the proposed CTC. For example, under the existing CTC, a working parent with two children receives $2,000 if she earns $16,000 and $4,000 if she earns over $30,000. Under the new plan, a parent with two children would receive between $6,000 and $7,200, regardless of whether she works. Pivoting from a work-based to a universal benefits program raises an important question: How many parents will leave the work force because of diminished work incentives? 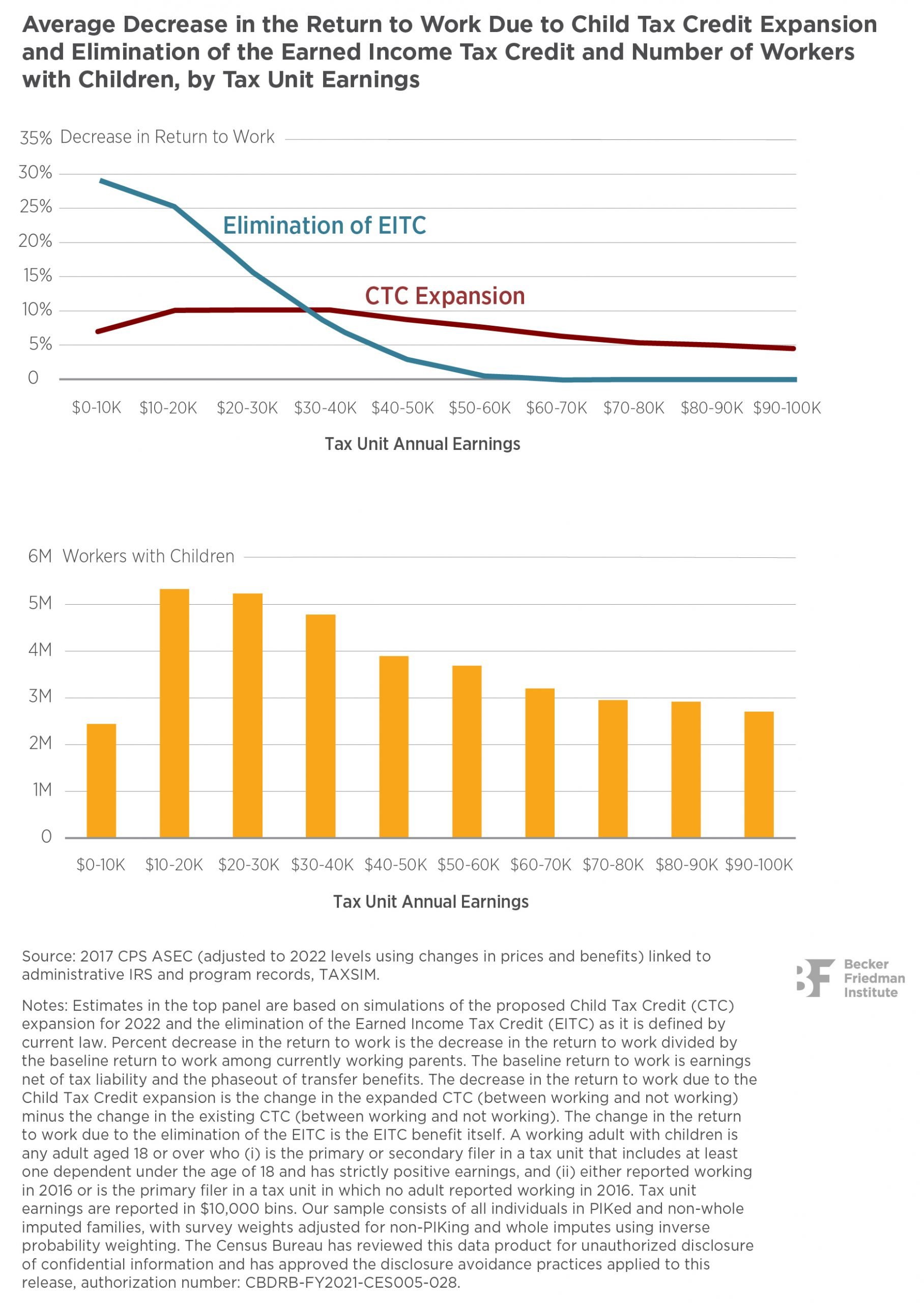 To answer this key labor supply question, the authors rely on estimates of the responsiveness of employment decisions to changes in the return to work from the academic literature and mainstream simulation models. They find that replacing the existing Child Tax Credit with a child allowance would lead approximately 1.5 million working parents to exit the labor force. Most of this decrease derives from the elimination of work incentives; for example, the return to work is reduced by at least $2,000 per child for most workers with children. In this regard, the existing CTC provides work incentives on par with the EITC; eliminating the existing CTC would reduce employment by 1.3 million jobs on its own. Further, the new child allowance would reduce employment by an additional 0.14 million jobs because people work less when they have more income.

These findings contrast with a 2019 study by the National Academy of Sciences, which estimated that replacing the CTC with a child allowance would have little effect on employment. This study, though, did not account for the elimination of the existing CTC’s work incentives, even though the study did account for similar incentives when studying an expansion of the EITC.

Ultimately, when accounting for the substantial exit from the labor force due to the proposed CTC, the positive impact on poverty reduction diminishes greatly: The replacement of the existing CTC with a child allowance program would reduce child poverty by just 22%, and deep child poverty would no longer fall.