Why do individuals join armed groups? Research has pointed to several causes, including profit motives for gang members, economic incentives for those involved in civil conflicts, and nonmaterial motives such as intrinsic motivations that can be fueled, for example, by the desire for revenge, say, when a family member is killed by another group. 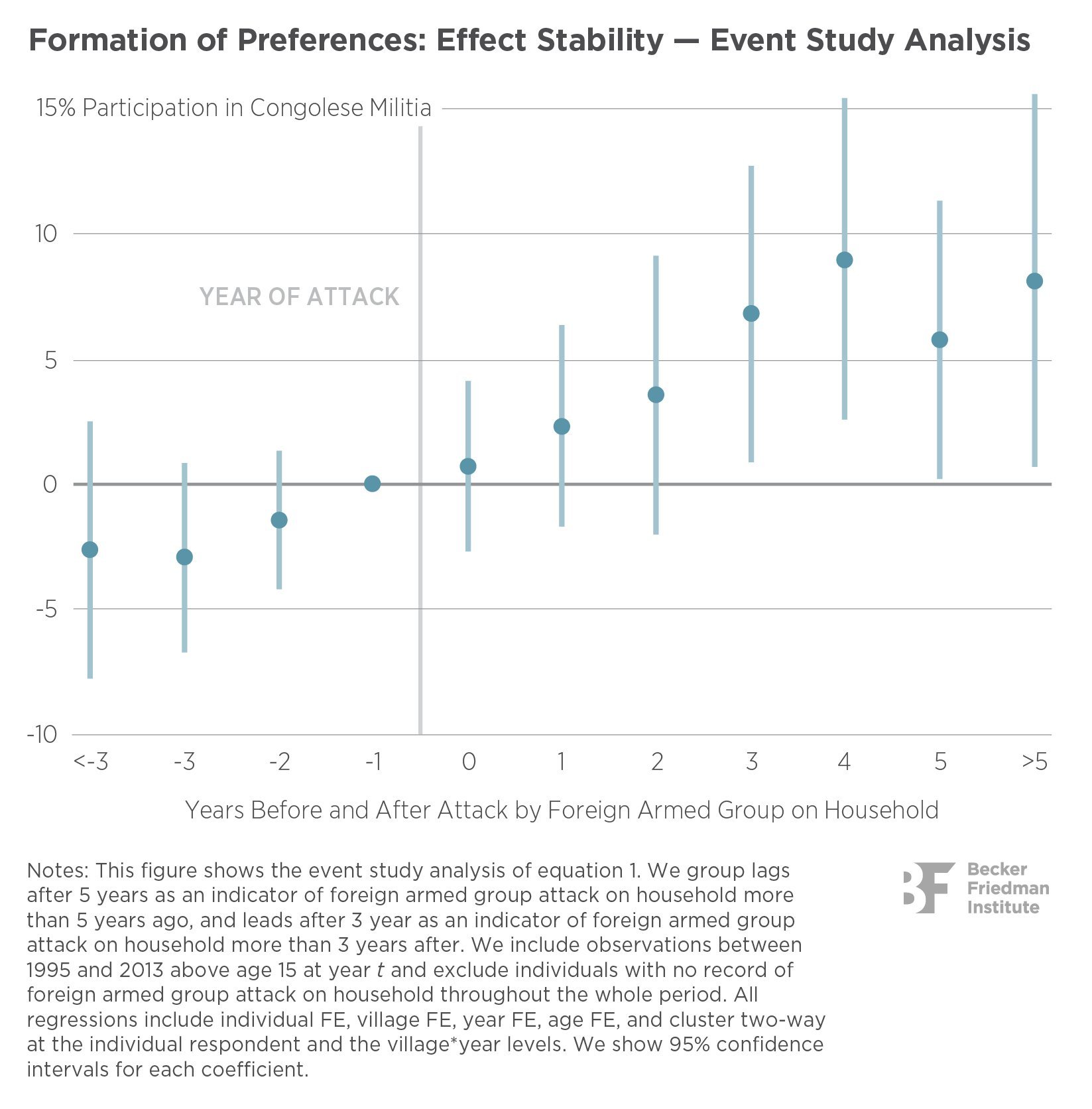 Economists have recognized the importance of nonmaterial motives for civil conflict. However, there is no empirical evidence in economics about the importance of intrinsic motivation for armed group recruitment, except through self-reported narratives. This paper attempts to settle this debate and demonstrate how nonmaterial motives form by providing evidence for the formation, and effects, of intrinsic preferences to join armed groups, in eastern Democratic Republic of the Congo (DRC), where about 120 nonstate armed groups operate in eastern DRC, some of which are considered foreigners, and where numerous local militias have formed to oppose these many groups.

The authors assembled a yearly panel dataset on the occupational choices and household histories of 1,537 households from 239 municipalities, and the violence perpetrated by armed actors on those households, dating back to 1990. They measured exposure to attacks on households and participation into armed groups using household histories. In other words, ​because of the specific context of the study, and approaches to minimize concerns of misreporting, participation histories could be reconstructed. The authors’ main analysis exploits variation in exposure to foreign armed group attacks across and within households over time.

Employing a many-layered methodology to, among other factors, isolate the causal effect of an attack by foreign armed groups, the authors find that if a household has been attacked by a foreign armed group, the probability that the individual in such a household participates in a Congolese militia is 2.55 pp (2.36 times) larger in each subsequent year. This effect is so large that it drives the effect of attacks by any armed group on participation into any armed group.

The authors find that the main effect is consistent with the formation of preferences arising from parochial altruism towards family members, and rule out leading alternative causal channels that could explain their baseline estimate. The effect of victimization on participation is so large that it would take a prohibitive increase in income outside armed groups to undo it—a permanent 18.2-fold increase in yearly per capita income.

In sum, this paper provides evidence for the forging of rebels by illustrating that violent popular movements form from the interaction of intrinsic motivation to take arms, as well as state weakness. The effect of victimization on participation is so large that it would take a prohibitive increase in income to undo it. The results suggest that violations perpetrated by foreign armed groups generate among the relatives of the victims a desire—and possibly a moral conviction—to fight back. This work also provides the first-of-its-kind evidence for the forging of rebels through the forging of preferences and shows that nonmaterial motives can explain a high-stake conflict and a high-stake developmental outcome.