Governments around the world have deployed numerous policy instruments to control the spread of COVID-19, with some instruments, such as large-scale lockdowns, causing significant economic harm. These costs have been especially pronounced in developing countries, where economic slowdowns associated with COVID-19 policies combined with weak social safety nets were expected to push between 71–100 million people into extreme poverty in 2020. 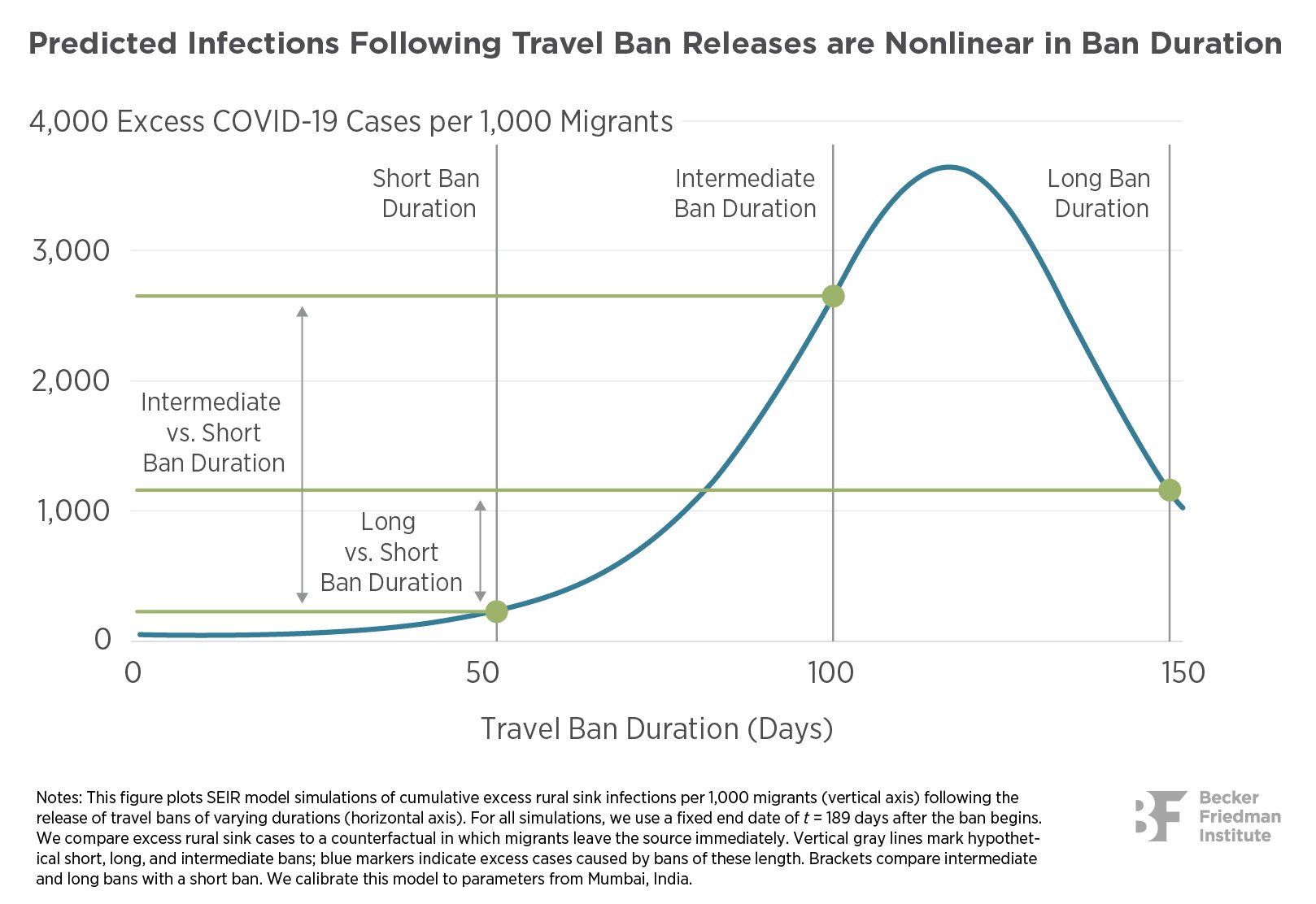 Domestic travel bans are a particularly severe and relatively common restriction. Motivated in part by simulation exercises that model them as effective methods for reducing the spread of disease, they also impose substantial and inequitable economic costs, which make them difficult to sustain indefinitely. As a result, these policy instruments necessarily involve two decisions: (i) whether to restrict freedom of movement and (ii) for how long to do so.

To examine these decisions, the authors focus on domestic travel bans implemented by developing countries, which are frequently characterized by the presence of large populations of migrant workers. A United Nations report that examines data from 70 countries and more than 70% of the global population found that more than 763 million people were living within their home country but outside their region of birth in 2005. In addition, the rural-to-urban migration most affected by COVID-19 mobility restrictions is more common in developing countries than in the developed world, and the presence of a large population that may respond to economic shocks by moving has motivated many developing countries to utilize travel bans to prevent the spread of disease.

For this work, the authors estimate the impact of travel ban duration on the spread of COVID-19 by simulating disease transmission using a standard model that mimics a real-world scenario facing many developing countries, in which migrants leaving an urban hotspot spread infections to a rural destination. The results from this modeling exercise generates their key hypothesis: that the impact of travel bans is nonlinear in duration.

To test this finding empirically, they examine a natural experiment in Mumbai, India—the country’s financial capital and initial COVID-19 epicenter—which relaxed travel bans after varying durations. On March 25th, the country imposed a nationwide lockdown, maintaining a ban on domestic travel out of the city, causing immense suffering as the economy rapidly contracted and unemployment rose, especially among migrant workers, who do not have access to the social safety net in India. Under intense pressure, the government allowed the first wave of migrants to return to homes outside Mumbai’s state of Maharashtra on May 8. Phase 2 migrants, returning to districts in the Mumbai Metropolitan Area, were allowed to leave on June 5, and Phase 3 migrants, departing to all other destinations, were able to leave on August 20.  Finally, the authors used cross-country data to examine travel bans in Indonesia, India, South Africa, the Philippines, China, and Kenya. Together, these countries comprise roughly 40% of the global population.

The authors’ model and empirical results are in agreement about domestic travel bans: relatively short and relatively long restrictions can successfully limit the spread of COVID-19; however, intermediate length bans—once lifted—can significantly increase COVID-19 growth rates, cumulative infections, and deaths. The full effect of travel bans can therefore only be quantified after they are lifted. More broadly, these results underscore that quantifying the unintended consequences of COVID-19 restrictions, including both disease and economic costs, is critical for policy decisions.