A growing literature documents a large increase in polarization across political parties in the US, meaning that your affiliation with a political party is now a more significant predictor of your fundamental political values than any other social or demographic divide. This polarization has extended to social groups, including family, friends, and neighborhoods, and raises important questions about the workplace. How, for example, has political polarization changed in the workplace over time, and does it affect firm value? 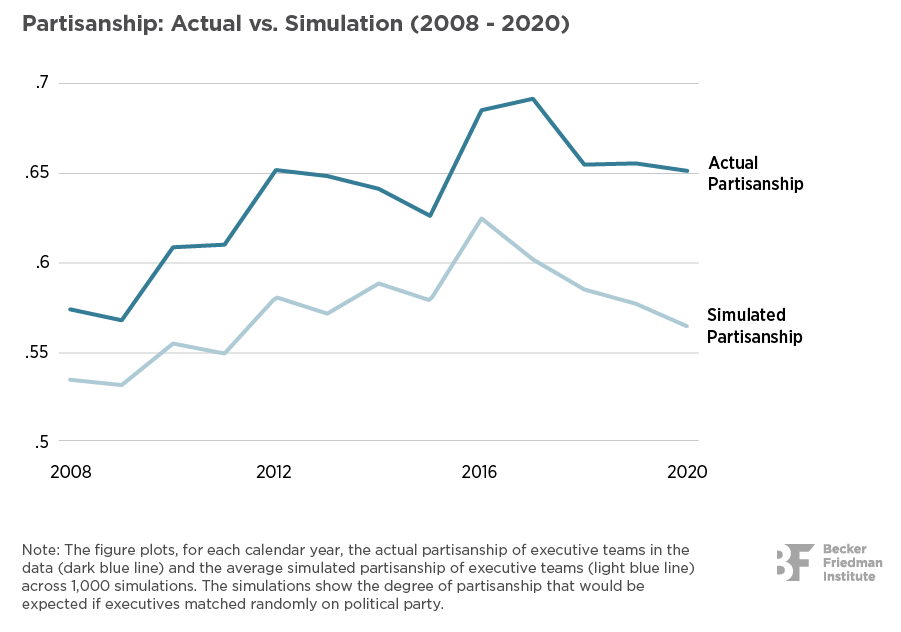 To this point, little is known about the effect of political polarization in the workplace, especially regarding firm value. To fill this gap, the authors study political polarization among members of executive teams by reviewing SEC disclosures, which allow them to link executives to voter registration records and obtain party affiliations. Recent research reveals how political partisanship shapes the perception of the economy and economic decisions not only by households, but also by economically sophisticated agents in high-stakes environments. The authors combine data from the SEC with voter registration records to find the following:

The authors acknowledge that important questions remain regarding the underlying mechanisms between political polarization and reduced firm value. How, for example, does the political diversity of the executive team affect corporate decisions, such as hiring, investment, and financing policies, as well as corporate innovation decisions? How does the rising political polarization of executives influence other stakeholders, including debt holders, employees, and local communities? Is political assortative matching among executives special among firm employees? And, to what extent are partisan executives motivated directly by political preferences (i.e., wanting to live and work around like-minded individuals) or indirectly (e.g., by selecting on characteristics of the company, its workforce, or its location that are correlated with partisanship)?