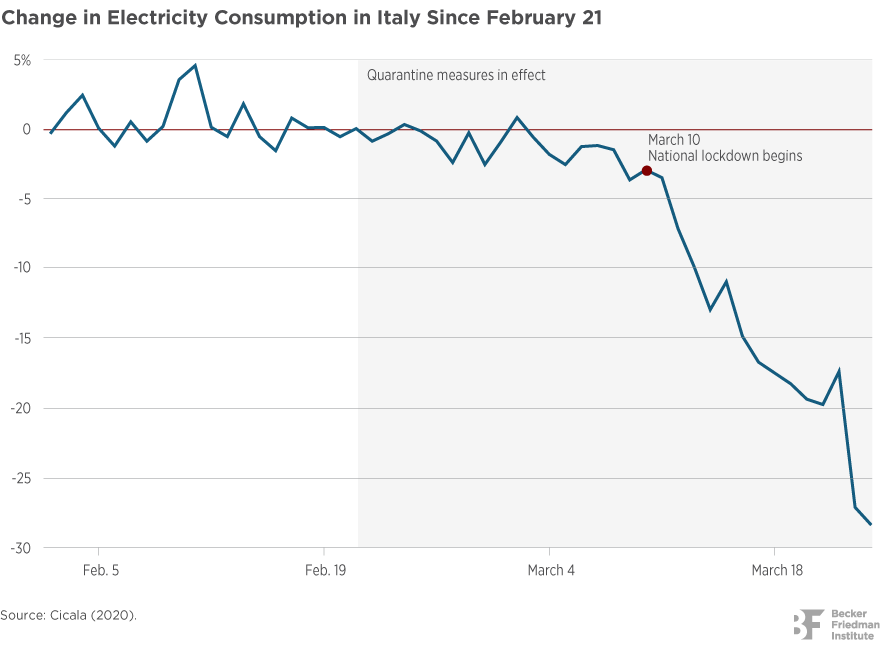 With Americans largely self-isolating amid concerns about COVID-19, some of the hardest-hit areas are already seeing electricity demand begin to weaken. It is useful to review what has happened to power demand in Italy, which some say is about 11 days ahead of the US trajectory of the virus. Compiling regional grid data and adjusting for weather changes reveals that power demand has plunged in Italy since the middle of February.

Power demand could be a real-time indicator of the more widespread impacts on the Italian economy. Also, what is happening in Italy could point to what the United States could expect in the coming weeks as states issue tighter restrictions on daily life. When there is a sharp shock to the economy, other indicators like employment may lag in reflecting the impact. This is because laying off workers is often seen as a last resort as companies start by taking other measures like ramping down production or adjusting maintenance schedules. Conversely, electricity demand shows the more immediate change and is a broad measure of economic activity. This was on display during the last recession in the United States. US power demand began to fall a month before the official start date of the recession according to the National Bureau of Economic Research—a date that was determined after an additional year of data had been collected. As policymakers today are considering which countermeasures may be in order to buffer the economic effects of coronavirus, a real-time indicator of the economy’s strength is of the utmost importance.