Skip to content
Chart
Flight to T-Bills/Cash, Dollar is King 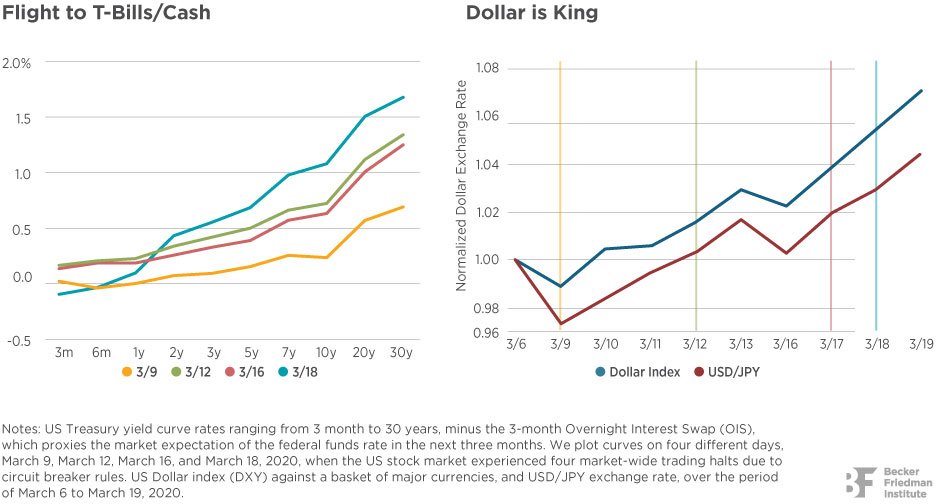 When the market is calm, the term structure of the Treasury yield curve tends to be upward sloping, as investors expect to be paid more when lending in the longer-term. But on March 9, when the first market-wide halt was triggered by the coronavirus outbreak, the term structure was greatly flattened as investors responded to stock market turmoil by turning to long-term government bonds. During the second and third market-wide halts on March 12 and March 16, as the liquidity crisis was looming, investors started scrambling for cash, i.e., the government debt with the shortest maturity. As a result, short-term Treasury Bills (T-Bills) that can be quickly converted to cash became highly favored by investors, raising their prices relative to long-term treasuries and bending the entire yield curve upward sloping again.[1] This flight to T-Bills also explains the recent striking fall of stocks, commodities, and long-term bonds in the same time.

The situation worsened even more on March 18 when the stock market halted for the fourth time in this sequel, strengthening the upward yield curve. However, the upward slope in this dire situation is driven by the surging demand of US currency from market participants–ranging from companies, funds, or sovereigns–potentially to pay off their US dollar denominated debts and other contractual obligations. This dramatic increase in demand for US currency is reflected in Figure 2, which plots the soaring dollar index (DXY) against other major currencies. Note, USD/JPY rises too, even though Japan has been widely appraised for its success of containing the virus during this time. This is behind the Federal Reserve’s recent aggressive expansion of its dollar swap lines with several major central banks.

[1] We have taken the 3-month OIS spread out from the entire yield curve to eliminate any mechanical level shift caused by the (expected or realized) federal funds rate movement on that day. (Indeed, the federal funds rate was cut on March 15.) Also, the upward sloping is not due to rising expectation of inflation; during this period the breakeven inflation rate (a market-based measure of expected inflation, the spread between nominal bonds and inflation-linked bonds say TIPS) goes down slightly.