Skip to content
Key Takeaways
Why do people in countries with less freedom decide to rebel? On the other side of the coin, why do some people seem to willingly live under repressive regimes for years, even generations? Further, what is the impact of even minimal contact with a more open style of government on regions that eventually succumb to authoritarian rule? These are not idle academic questions but are rather dynamic inquiries into nation-building that are playing out today.

In “A Glimpse of Freedom: Allied Occupation and Political Resistance in East Germany,” Luis R. Martinez, Jonas Jessen, and Guo Xu explore these and other questions through the lens of post-World War II East Germany, where both Allied and Russian troops occupied and governed various municipalities, and where the Allied troops eventually left, leaving the memory of a more open form of governance that, as the authors reveal, later fueled acts of rebellion.

The devil you know … or not?

Over 60 percent of the world’s population now lives in countries that are less than fully free, and that trend has been increasing in recent years. Readers may assume that political opposition has simultaneously increased in response, and such an assumption would align with canonical models of regime change that predict an increased willingness to rebel when there is more to gain. However, what if people living under authoritarian regimes have little knowledge about better forms of government? In such a case, the devil you know may be better than one you don’t.

Chart
Figure 1: The Line of Contact and Protest Incidence in 1953 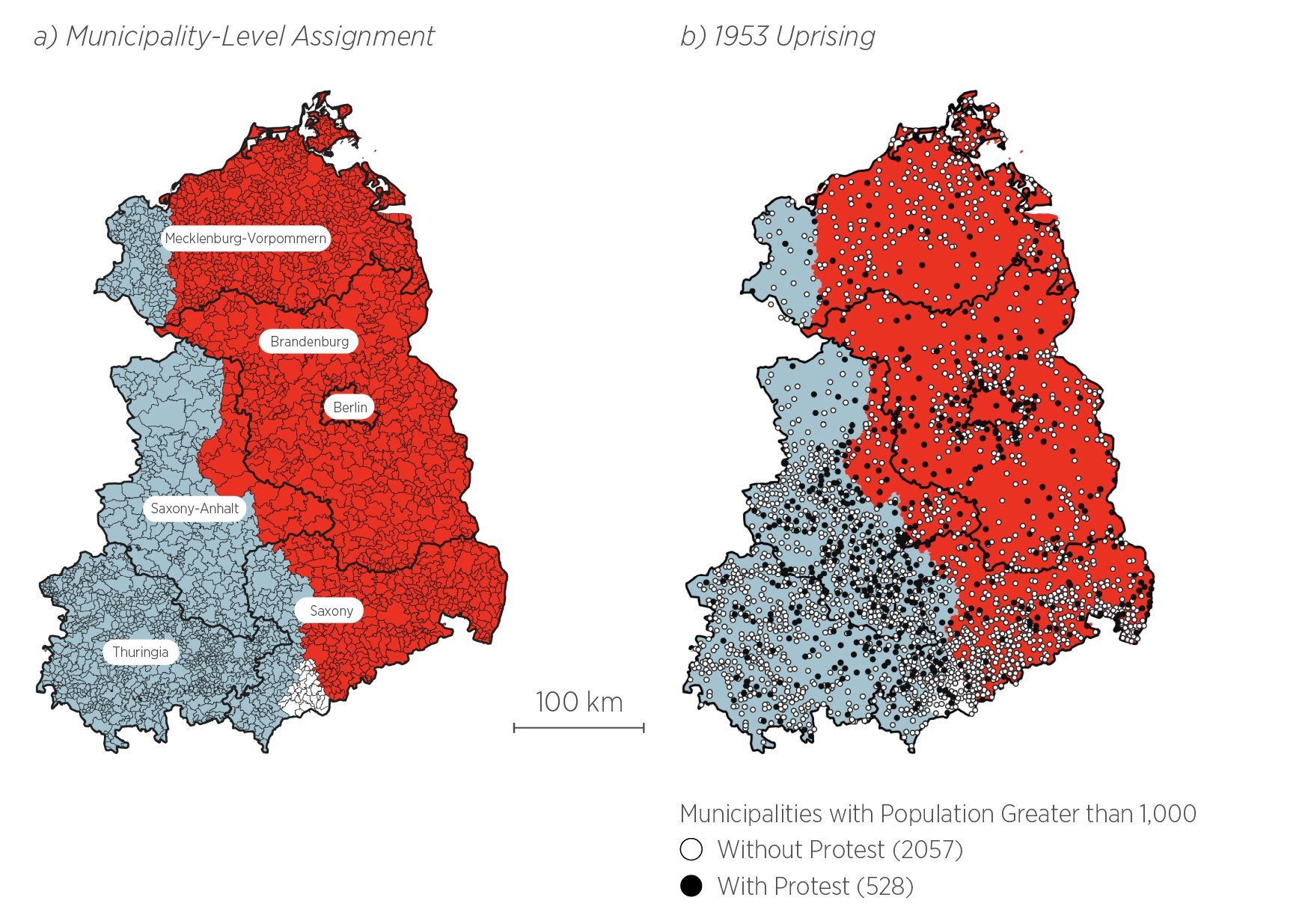 Notes: Map in Panel (a) shows state and municipal boundaries of the contemporary Federal Republic of Germany (as of December 31, 2016) in the area corresponding to the former German Democratic Republic (GDR). Municipalities in blue were initially occupied by the Allied Expeditionary Force, while those in red were initially captured by the Soviet Union. The uncolored counties in the south correspond to an area later known as the Free Republic of Schwarzenberg, which was not initially occupied by Allied or Soviet forces and only captured by Soviets on June 24, 1945. Panel (b) shows the location of municipalities with information on protest incidence during the 1953 uprising.

Consider one-party states and absolute monarchies, like China or Saudi Arabia, where people have only vague notions of other forms of governance. Or consider hybrid regimes like Russia, Turkey, or Venezuela, where attempts at opposition are often suppressed. People may know what they are fighting against, but if they do not know what they are fighting for, they may not engage in costly political action.

To investigate this phenomenon, the authors examined post-WWII Germany and the influence of Soviet control in what would later become East Germany. When the Nazis surrendered, 40 percent of the pre-arranged Soviet occupation zone was occupied by troops from the western Allied Expeditionary Force led by the United States and the United Kingdom. However, this Allied occupation lasted roughly two months and Soviet forces were soon in full control. Over the following years, the entire Soviet-controlled area would develop into a highly authoritarian and repressive regime: the German Democratic Republic (GDR), or East Germany.

The authors conducted careful historical and archival analysis to reconstruct the exact line of contact between governing forces and the local populace, which allowed them to tease out the effect of exposure to Allied occupation—however fleeting—on measures of political resistance to the budding dictatorship in East Germany. One form of political resistance that is generally easier to observe than more subtle forms is active resistance, or protests. In this case, then, the question becomes: Did people exposed to Allied governance retain a memory of that experience that informed their reaction to Soviet rule, and did that memory fuel eventual protests?

Chart
Figure 2: Incidence of Protests in the 1953 Uprising Around the Line of Contact

Notes: Units of observation are East German municipalities with a population above 1,000. Figure shows means of an indicator for the occurrence of protests during the 1953 uprising computed in 2km bins around the line of contact. Negative distances from the line denote the Allied side of the line of contact, positive distances correspond to the Soviet side. The fitted polynomials are based on regressions using unbinned data with either a linear, quadratic or cubic polynomial of the forcing variable.

Such protests were rare in East Germany prior to the events of 1989-90 that led to democratization and German reunification. However, there was one major episode of political unrest, in 1953, that—historians have argued—had the potential to cause the demise of the communist dictatorship in East Germany if not for the intervention of Soviet troops. This episode and the heterogeneous actions by citizens in various municipalities offered a natural experiment for the authors.

What they found was startling: There was, indeed, a connection between exposure to more accountable governance and rebellious reaction to authoritarian control. Municipalities that were initially occupied by Allied forces were approximately 15 percentage points more likely to experience protests during the 1953 uprising against Soviet rule. This is a large effect, corresponding to 68 percent of the sample mean, which the authors validated through a battery of tests described in the working paper.

These findings are remarkable considering the short-lived nature of the treatment, about 70 days on average, and the authors acknowledge that this brief period makes it difficult to identify the exact micro-level mechanism through which exposure to the Allied forces translate into political behavior. However, by combining information from multiple sources, including several pieces of newly collected data, and by employing a stylized model of political agency, they shed new light on likely mechanisms for political rebellion. Their new data includes information about more than 1,300 mayors, some of whom were replaced following the Soviet takeover, as well as retrospective surveys among residents of the former GDR. A comparison of survey responses across the line of contact shows that the Allied occupation was more positively perceived and was associated with better governance and higher public good provision.

The authors cite from the conclusion of George Orwell’s novel 1984, and it bears repeating here: “so long as [the masses] are not permitted to have standards of comparison, they never even become aware that they are oppressed.” A primary contribution of this work is that it provides a methodology to test Orwell’s powerful assertion. And the lessons pertain today. The lack of an alternative in many non-democracies makes comparisons difficult for citizens. One-party states and absolute monarchies, as well as hybrid regimes, either leave no formal alternative or otherwise suppress opposition. For people living in repressive regimes, limited exposure to better political alternatives can, in the lexicon of economics, substantially shift the cost-benefit calculus of whether to support or resist a dictatorial regime.

CLOSING TAKEAWAY
The authors key finding reveals a connection between exposure to more accountable governance and rebellious reaction to authoritarian control. Municipalities that were initially occupied by Allied forces were approximately 15 percentage points more likely to experience protests during the 1953 uprising.

By leveraging the idiosyncratic line of contact that partitioned what would become the German Democratic Republic into Allied-exposed and non-exposed areas, the authors showed that even a “glimpse of freedom” can substantially alter the propensity of citizens to engage in costly resistance against an authoritarian regime. In this case, the exposure to the Allies increased the likelihood of protests during the 1953 uprising that almost toppled the dictatorship in East Germany.

Finally, and importantly, the authors’ findings on the importance of initial conditions within post-conflict settings has broad implications for modern state building, particularly for newly created and fragile regimes.