Skip to content
Key Takeaways
In recent years, some central banks have added a new responsibility to their list of tasks: ameliorate the effects of climate change. This could mean monitoring the short- and long-term exposure of financial institutions to climate change, or it could mean actively directing regulated financial institutions to invest in certain industries. In either case, central banks will have to determine how best to anticipate the likely effects of climate change many years into the future.

For central banks, this foray into climate change raises a host of questions about their role as monetary policymakers and financial regulators. Economists like to think of climate change induced by human activity as an externality, something that is missed by the invisible hand of market economies. In principle, fiscal policy has at its disposal more direct tools to address this externality, in contrast to monetary policy. In a world where political leaders cannot agree on such fiscal policy options as tax policy, research and development subsidies, and cap-and-trade policy to address climate change, the idea of adding monetary policy to the mandate mix is fraught with challenges.

Lars Peter Hansen, in “Central Banking Challenges Posed by Uncertain Climate Change and Natural Disasters,” explores these challenges by exposing some problematic aspects to some of the current approaches and suggesting better methods that recognize some remaining knowledge gaps and do not overstep the bounds of mandated policies. His analysis hinges on one word from his paper’s title, “uncertain.” Dealing with uncertainty, especially within time horizons extending to 30 years and beyond, is a primary challenge facing monetary and fiscal policymakers—and researchers—when considering climate change policies.

Note: The emission pulse was 100 gigatons of carbon (GtC) spread over the first year. The temperature units for the vertical axis have been multiplied by ten to convert to degrees Celsius per teraton of carbon (TtC). The boundaries of the shaded regions are the upper and lower envelopes. These responses are convolutions of responses from sixteen models and temperature dynamics and nine models of carbon concentration dynamics giving rise to 144 model combinations.

The challenge of long-range scenario planning

As the long-lasting damages of climate change become increasingly evident, policymakers are working to mitigate negative effects. For fiscal policy, this means such proposals as carbon taxes, or the creation of markets in production licenses, which make pollution an option only for those for whom clean alternatives are most costly. As Hansen discusses at length in the paper, fiscal measures, while imperfect, likely offer the best opportunity to address long-run costs through near- and medium-term policies, especially when coordinated across governments and regions around the world.

1. Hastily devised policy rules unsupported by quantitative modeling could backfire if, or when, climate policy targets are missed, harming the reputations of central banks, and weakening their effectiveness.

The naïve use of quantitative models without recognizing their limitations opens the door to flawed policy making. While quantitative models are key to understanding how policies address goals, the models themselves are often highly stylized and there are multiple models to consider. Prudent decision making confronts the uncertainty and does not just sweep it under the rug. Importantly, models are not static, but rather evolve over time as researchers offer insights and improvements.

As Hansen notes, the heterogenous predictions of models across the carbon and temperature dynamics is one of the multiple sources of uncertainty. See Figure 1 for plots model predicted responses of temperature to an initial pulse of emissions. While the patterns of the responses are very similar, there are notable differences in the quantitative magnitudes. Another important source of model ambiguity is reflected in the specification of so-called damage functions that are intended to capture the environmental and economic impact of climate change.  Moreover, such modeling outcomes are best interpreted as approximations.

2. Attempts to take on a broader mission without formal and well-defined mandates could compromise central bank independence in the longer run.

To maintain an arguably healthy distance of central banks from the political arena, climate change should be incorporated into the current mandates in a transparent way. Some, but not all, of the proposed courses of action for central banks seem defensible along these lines.

Congress and others responsible for fiscal policy could well look to central banks to take the reins in addressing climate change. This would provide political cover from having to make difficult decisions that may prove unpopular to various constituencies. But over time, such abrogation would lead to over-reliance on monetary policy at the expense of more efficient fiscal alternatives.

The bulk of Hansen’s paper explores these pitfalls in detail vis-á-vis such considerations as modeling challenges, measuring financial exposure due to climate change, testing for financial stability over long time horizons, skewing central bank portfolios toward green technologies, and comparing climate change risks vs. other natural disasters. For the purposes of this article, we will briefly discuss the challenge of testing for regulating financial institutions and preserving financial stability.

As Hansen describes, alternative central banks treat financial stability differently from the perspective of their mandates, in large part because their stated mandates differ. Financial stability is often connected to “systemic risk” in the financial system, although the term itself is often not well defined. Especially since the global financial crisis of 2007/2008, there have been modeling advances, and Hansen argues that these are largely qualitative in nature and that researchers still have much work to do in quantitative models to support financial stability policy. This is even more true when we factor climate change into modeling efforts.

Perhaps the most compelling potential systemwide concern vis-à-vis climate change is that the entire financial system might mismeasure the exposure to climate change uncertainty, both short term and long term. A good starting point for addressing this challenge would be to collectively explore how to quantify the exposure to climate uncertainty given the limited value of historical and cross regional evidence for the horizons over which the uncertainty might play out. Hansen argues that it would seem most prudent for financial institutions, central banks, and external researchers to work together on the climate specific measurement challenges, and to approach this with broader perspective on uncertainty than is typical in risk assessments. For instance, some of the negative effects of climate change are not expected to happen this year, the following year, or even 10 years from now; rather, some of the most salient effects may occur 30 years from now and even further out. Moreover, climate scientists warn of potential tipping points with highly nonlinear consequences and with uncertain trigger points. Climate change is very different from, say, the advent of the COVID-19 pandemic, which developed quickly and where policymakers could respond in almost real time to changing events.

A principal method that central banks use to test the stability of the financial system is to run tests based on scenarios, or a set of prescribed paths that could evolve. For example, are banks and other financial institutions able to survive financial shock A or shock B and so on? If not, how can regulators ensure that financial institutions are prepared to meet anticipated challenges? The extended time horizons that are required for climate change scenarios make stress testing harder than it already is. For example, in 2019, the Bank of England published a series of 30-year scenarios, a sample of which are shown here in Figure 1.

While these are only a subset of the Bank of England’s proposed scenarios, each scenario provides a prospective path of the consequences of climate change. It seems of little value to ask financial institutions to inform regulators what they would do along such a path. In reality, paths will have uncertain branches, and branches of branches will likely emerge in different ways. Much work has been done in applied probability theory to provide tractable representations of uncertainty in dynamic settings, but important insights are lost in static formulations of scenarios over long horizons.

How could this play out vis-á-vis climate change? As Hansen describes, we may be uncertain how temperature changes will damage economic and social opportunities in the future, but over time we will gain a better understanding of these adverse outcomes, and we could then act. However, that may already be too late, and too costly. Thus, there is an important tradeoff missed by typical scenario analyses. Further, scenarios that take emissions trajectories as given over time miss the fact that if there are surprisingly strong or weak damages to the environment and to the economy, these surprises would likely prompt a policy response and, thus, alter the path of emissions.

How to answer that question? Hansen prescribes decision theory under uncertainty to, for example, better speculate about private sector behavior, which has value in both conceptualizing and quantifying how decisions depend on trade-offs between best guesses and possible bad outcomes. He offers examples of how decision theory can improve scenario-based stress testing, and key to such improvement is to include the cost that each approach imposes on private sector participants. From a dynamic perspective, central banks should consider potential policy responses from outside central banking and uncertain outcomes from private sector responses, to include investments in future green technologies. For meaningful responses to stress tests, it is imperative to avoid having financial institutions condition on given prospective trajectories without entertaining how uncertainty may unravel over time.

While fraught with challenges, Hansen notes that there is virtue to having central banks monitor the exposure of the financial system to climate change, but he warns that there are reputational costs to overselling what can be accomplished by some of the current approaches. Fundamentally rethinking stress tests, including the embrace of decision theory under uncertainty, could lead to improved oversight in the future.

CLOSING TAKEAWAY
While fraught with challenges, Hansen notes that there is virtue to having central banks monitor the exposure of the financial system to climate change, but he warns that there are reputational costs to overselling what can be accomplished by some of the current approaches.

Climate change is an important challenge for economic policymakers and, given some of the frightening long-run scenarios, it is understandable that some are inclined to use all policy tools available. However, prudence is the better part of valor when conjuring long-run scenarios and when considering the best policy responses.

In a world with long-term uncertainty, fiscal policy can have an impact, including through taxation of carbon emissions or subsidies for research that aid the development of new technologies that pose much less of a threat to the environment. How best to develop and use quantitative research to guide fiscal policy in the face of uncertainty remains a fertile avenue for future research.

Monetary policy, on the other hand, is a weak substitute for sensible fiscal policy when it comes to addressing climate change. However, it is not without value. Central banks can support fiscal policy objectives and promote sound strategies for quantifying longer-term impacts of exposure to climate change uncertainty. Indeed, there will be societal benefits that can be mutually beneficial for financial institutions as well as central banks in their role of monitoring a broadly conceived banking sector. Policymakers that extend the role of central banks to incorporate climate change policy overstate their ability to contribute, and run the risk of overpromising and compromising their political independence. 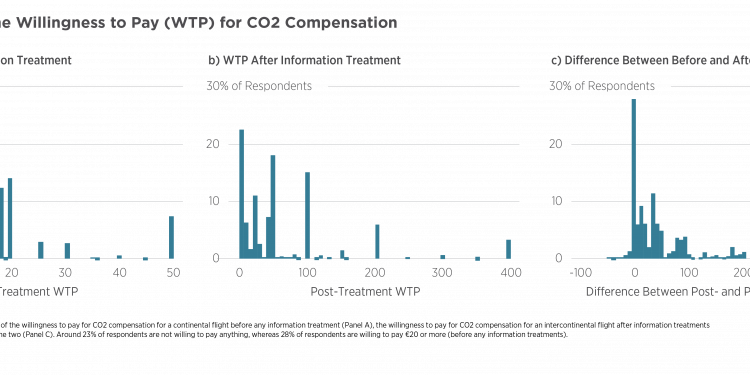 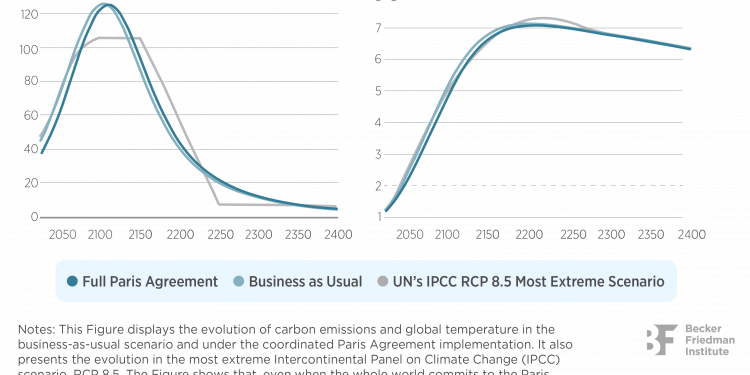