Skip to content
Key Takeaways
Many consumers would not be surprised to learn that US corporations spend significant resources on marketing, including advertising, branding, promoting, selling, and trademarking. The evidence abounds from ads alone, including those on buses and billboards, radio and television, social media and websites, product placement in movies and TV shows, among many other manifestations.

To put a number on it, investment in marketing, which is just one type of what economists call “intangible capital” (and which includes, for example, such assets as better organizational structures, strong relationships with suppliers, or firm-specific human capital of employees) stands at about 12 percent of US GDP. Nearly one-fifth of this intangible capital investment (roughly $500 billion in 2021) was attributed to marketing expenditures that build and sustain brand equity.

However, none of this substantial—and growing—intangible capital appears as investment in the National Income Product Accounts (NIPA), which measure output and the income generated from that production. Further, despite acknowledgement by economists for nearly a century that intangible capital is an important element of the economy, research economists have not closely examined the roles of marketing investments in their analysis of, for example, industry structure and aggregate output.

In “Intangible Marketing Capital,” the authors address this gap by exploring one element of intangible capital—the many roles and effects of branding and intangible brand capital. The authors focus on the creation and maintenance of a brand name and all its corresponding brand elements (for example, awareness, reputation, image, among others), along with the investments in the labor force used to manage and oversee the branding. Their analysis provides insights on the magnitude and recent growth of intangible capital in the US economy, including the growing role of marketing human capital on company payrolls and on our understanding of market organization, firm productivity, and macroeconomic growth. 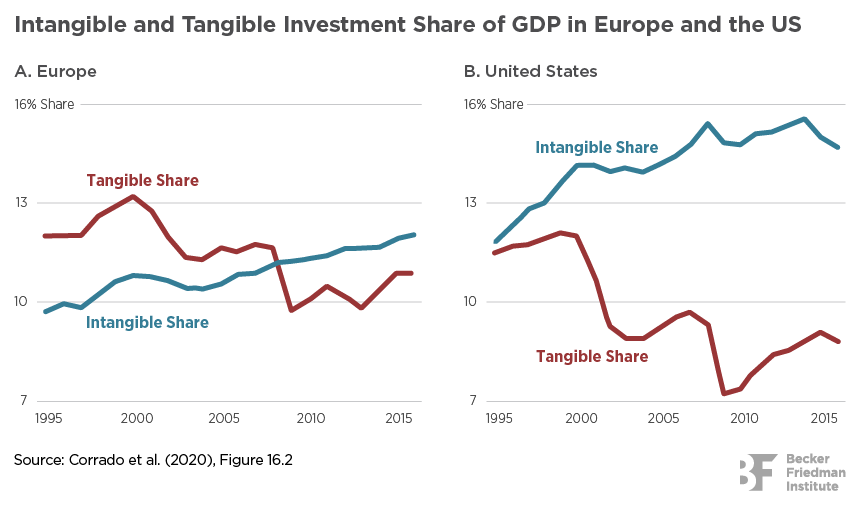 This Research Brief recaps “Intangible Marketing Capital,” which readers are encouraged to review in full, as it provides a layman-friendly description of the large economic magnitude of intangible capital and its recent growth, the increasing role of marketing personnel, the formation of brand capital, and explores whether branding can be both socially wasteful and welfare-improving, among other topics only broadly described here.

From its beginnings as a literal forged brand onto a firm’s products, branding has come to mean a name, symbol, design, or mark that brings value to a product beyond its functional purpose. That extra value is termed brand equity and consists of the intangible capital that generates profitability for the firm. An aspirin is an aspirin, but if you are willing to pay more for the same aspirin when it carries a certain brand name, then you are contributing to that company’s intangible capital. And the expertise of the employees who convinced you that a certain brand has extra value is a critical part of this equation.

What is the full value of brand capital for a firm? Not surprisingly, this is not an easy question to answer. To do so, one must devise a counterfactual scenario that imputes or estimates what a firm’s profits would be absent the intangible capital. In such a counterfactual world, do the brand and its trademarked brand elements cease to exist? If so, does the firm build or acquire a different brand? Or does the brand get transferred to another (competitor) firm? Regardless, the profit stream in this counterfactual world must be estimated. To approximate this value, the authors utilize data from a private vendor to estimate the value of the 100 most valuable brands at $4.14 trillion in 2021, with brand value rising from 29 percent of property, plant, and equipment in 2007-2009 to 47 percent in 2018-2020.

If a firm’s branding expenditures are successful enough to increase demand, this can lead to an escalation in marketing investments by that firm and ultimately raise barriers to entry, sustaining market power and concentration for that firm.

After establishing these and other facts about intangible marketing capital, the authors describe investment theories regarding a firm’s private benefits from investments in branding, such as advertising and promotion, that potentially explain the magnitude of observed economy-wide marketing investments, with a focus on three mechanisms through which marketing investments affect consumer demand and industrial market structure:

1. Reputation and the role of prestige and/or quality.

Consumers routinely pay a price premium for branded goods even when cheaper alternatives are available, so one might imagine that firms would promote the brand’s reputation. However, most forms of brand advertising convey little or no objective quality information other than a reminder of the brand. Advertising, in this case, signals a brand’s quality if high-quality firms derive higher returns from branding than low-quality firms. Similarly, if more efficient firms derive higher returns from branding, consumers may prefer advertised brands because of the signal of higher efficiency and, hence, better deals.

2. Reduction in transaction and search costs:

Ever stop for a moment when making a purchase because your favorite brand changed its packaging, if only slightly? You likely pause to take a closer look to confirm that you are making the right purchase. Now, imagine a world without branding, where substitutable products are all packaged similarly, so that every time you make a purchase you must engage in research about what to buy, even if you had purchased the product before. Time is money, and—in addition to searching and comparing—when you add in the time and costs for ordering and payment, delivery, and post-purchase service and support, those costs add up. In this sense, branded goods are less costly to purchase.

3. Competition and the role of strategic interaction and investment escalation:

If a firm’s branding expenditures are successful enough to increase demand, this can lead to an escalation in marketing investments by that firm and ultimately raise barriers to entry, sustaining market power and concentration for that firm. This means that even as the market grows, only a small number of branded goods dominate while charging a price premium. The escalation in advertising may be even higher if early entrants use their branding to preempt future entry by a rival. In such a scenario, consumers would face higher prices and less choice. 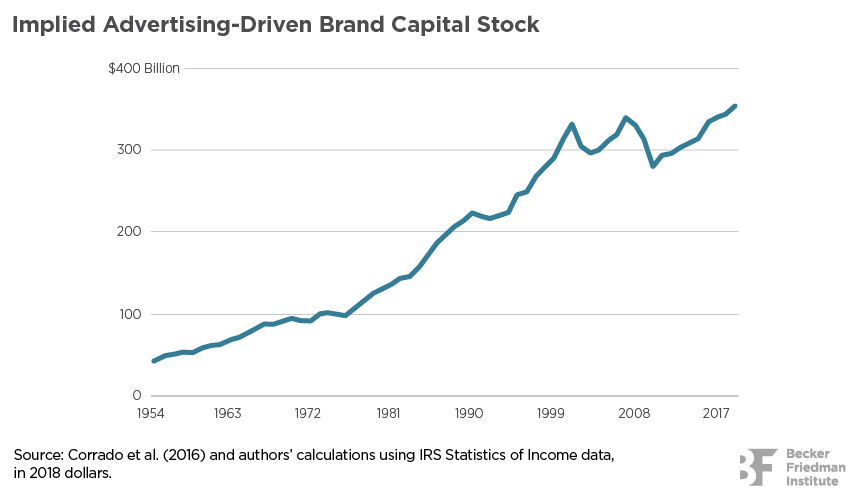 From the discussion thus far, readers have likely intuited that the social welfare extending from brands and brand investments can skew positive or negative. Among researchers, the debate about these tradeoffs has proved divisive, and the authors describe the following three views that are prominent in the literature:

The persuasive view: For over 100 years many economists have speculated that advertising is mostly combative and, therefore, socially wasteful, with ads largely conveying information from an “interested” party, thereby providing little objective value, and mostly creating spurious perceived differentiation and loyalty. According to this view, consumers can rarely distinguish among brands in blind tests, prices are higher than they otherwise would be, and barriers to entry are inordinately higher.  By way of example, according to the FDA, generic prescription drugs are typically 80 to 85 percent cheaper than the equivalent branded drug, with some estimates suggesting that consumers would save $44 billion annually simply by switching to store-branded consumer packaged goods. In 2003, a US Department of Health and Human Services report concluded that patients could reduce their daily drug costs by 16 percent if they switched to generics, with an economy-wide saving of $17 billion.

The informative view: During the 1960s, work by UChicago’s George Stigler and Lester Telser took issue with the persuasive view and argued that advertising communicates valuable information about the product and its attributes. To the extent that advertising reduces consumer search and evaluation costs, it would be procompetitive, leading to less price dispersion and lower markups. Furthermore, advertising could facilitate entry and further expand competition. Under the informative view, advertising can be socially beneficial by creating consumer value and potentially toughening price competition. Research by UChicago’s Bradley Shapiro finds, for example, that anti-depressant advertising increases prescriptions and, most striking, decreases workplace absenteeism (see BFI Economic Finding on Shapiro’s work).

The complementary view: Recent research takes the view that consumers derive consumption utility from the brand and branding itself, even if the advertising conveys no objective information; again, UChicago economists are prominent in this work, in this case Gary Becker and Kevin Murphy. Research has shown that consumers who have recently purchased a branded good are more likely to watch (consume) ads for that good instead of skipping them. In one controlled experiment, television advertising for a branded antihistamine was found to improve the physiological reversal of a histamine reaction in response to the drug.

While the welfare implications of advertising are more ambiguous under the complementary view, Becker and Murphy show that if advertising decreases the equilibrium price of the advertised good, then the market is under-supplying advertising. Intuitively, this test would indicate that firms are not considering advertising’s ability to increase willingness-to-pay for the advertised good when deciding their marketing spending. Conversely, even if advertising increases equilibrium prices, it need not be socially excessive if it creates enough consumer value.

A roadmap for future research

As noted above, given the relative dearth in research surrounding intangible marketing intangible capital, there is room for more work, and the authors list three areas of focus that would bear fruit: agency and conflict of interest (wherein outside ad agencies and internal marketing departments have little incentive to accurately evaluate the performance of ad campaigns); productivity and growth (measuring the productivity of intangible capital requires methodologies that extend beyond standard output-to-input ratios); and alternative sources of intangible marketing capital (firms often employ customer relationship management systems, for example, and little is known about the moderating effect of marketing investments on the formation of consumption capital throughout a consumer’s lifetime.