Skip to content
Key Takeaways
Most manufacturers, if they expect to grow and flourish, not only need to expand their existing product line but must also innovate and otherwise add to their product mix, whether that means adding entirely new items or improving the quality of existing goods. In other words, producing the same thing over and over, without any modifications or without branching out into other product lines, is not a typical recipe for long-term success.

That product differentiation and product expansion are key to a company’s success might seem intuitive to some, but the mechanism for successful and sustained growth has long been open to question. Do successful firms grow by focusing on branching out with variations on existing products (horizontal growth), or by taking chances on the introduction of new product lines or those that push existing products to new market levels (vertical growth)?

The answer, according to a recent paper by Booth’s Chad Syverson and his colleagues, “Product Innovation, Product Diversification, and Firm Growth: Evidence from Japan’s Early Industrialization,” is that while both are necessary to tell a complete story about firm growth, vertical development—fueled by product innovation through experimentation—is the key. The authors come to this conclusion from an analysis of a seemingly unlikely source: Japan’s cotton spinning industry at the turn of the 20th century.

Growing out while striving up

Before describing the authors’ work in more detail, it is useful to more thoroughly consider the distinction between horizonal and vertical growth within a firm. For example, imagine a car manufacturer that, in the hopes of increasing sales, takes its standard model and adds aesthetic options to expand consumer choice, like different colors and fancier interiors, and even adds different types of vehicles, but all the models have the same basic technology under the hood. The differences are more cosmetic than transformational; this type of growth model is considered horizontal.

Now, imagine an auto manufacturer that not only grows horizontally, but also pushes the barriers of technology under the hood, and takes a chance on, say, adding more horsepower to the engine, or adding a special hybrid engine, and doing so with a variety of model cars. This manufacturer is moving up the technological ladder, or growing vertically, at the same time that it is expanding horizontally. In some cases, the movement up the technological ladder may fail, at least on the first iteration, but a key characteristic of successful firms is that they are willing to try.

To better understand the channel between vertical product expansion, horizontal growth, and firm growth, the authors investigate the Japanese cotton-spinning industry from the late 19th to the early 20th centuries. While many readers are certainly aware of Japan’s post-WWII manufacturing success, many are likely unaware of the country’s initial foray into manufacturing. After centuries of feudal life marked by ruling family dynasties, Japan entered what became the Meiji Restoration in 1868, which restored the country to imperial rule. Roughly coincident with this change was the introduction of the first set of modern spinning machinery in 1866, and within a few decades Japan was operating at the global frontier of cotton manufacturing.

Like entrepreneurs, these existing firms were testing new techniques and, in some cases, new products. Importantly, the authors find that this entrepreneurial-type activity not only resulted in movement up the technological ladder, but also resulted in horizontal product differentiation within the scope of the firms’ expanding technological frontier.

For Syverson and his colleagues, this early introduction into manufacturing provides a unique view into the “black box” of firm growth. A rich dataset from this era allowed the authors to distinguish between products that push a firm’s technological frontier and those that lie within their technological comfort zone. Thus, the authors could observe how these firms, in effect, acted as entrepreneurs to introduce new products into the market.1

Just like entrepreneurs, these existing firms faced their own supply-side constraints involving the introduction of new machinery (capital) and production processes, along with a high degree of uncertainty about the likely success of such ventures. Also, like entrepreneurs, these existing firms were testing new techniques and, in some cases, new products. Importantly, the authors find that this entrepreneurial-type activity not only resulted in movement up the technological ladder, but also resulted in horizontal product differentiation within the scope of the firms’ expanding technological frontier. To round out our analogy: Imagine the technological ladder leading to another floor, where innovative new products are manufactured; at the same time, the firm continues to climb the ladder and experiment, sometimes failing but often leading to new floors where new product lines are developed and manufactured.

In brief, while the authors’ study reinforces past research on the relationship between product expansion and firm growth, this new work offers the following insights:

CLOSING TAKEAWAY
Innovations are important, but vertically differentiated innovations, which spill over into horizontal expansions, are special. Horizontal expansions, in other words, do not lead to vertical growth. Further, vertical innovation is not incremental, rather, such advances leapfrog into unfamiliar territory and then are later “bridged” into the company’s existing product line.

By analyzing detailed data about the Japanese cotton spinning industry at the turn of the 20th century, the authors were able to distinguish the characteristics of high-growth firms. Essentially, high-growth firms are those that are willing to experiment and push their technological boundaries (vertical growth), even at the risk of failure. When their innovations are successful, these firms then broaden their product offerings based on those technological innovations (horizontal growth). Those firms that focus solely on diversification of existing product lines generally lag behind in sustained growth and product variety. This insight is new to existing models of economic growth.

While the authors do not directly address the applied or policy applications of their work, this research offer insights for contemporary corporations, as well as policymakers hoping to drive firm growth in, say, developing countries. In the latter case, it might not be enough to simply introduce new industries or product lines into a lesser-developed region, for example, but it may also be important to ensure that such businesses are dynamically focused on technological expansion and the resultant product differentiation. Doing more of the same thing can be profitable for a time, but to achieve sustained and expansionary growth over time a firm needs to experiment, innovate, and develop new products. And then it needs to repeat that process.

1A telling example of such manufacturing dynamism is present-day Toyota Industries Corp., which was founded by Sakichi Toyoda in the late 19th century as an innovative manufacturer of cotton looms (https://www.toyota-industries.com/company/history/toyoda_sakichi/index.html). 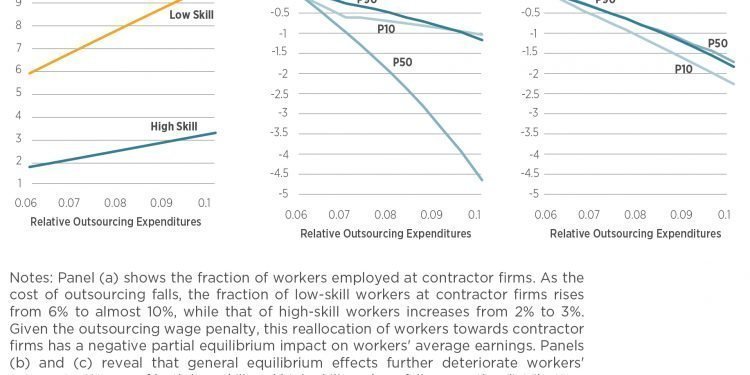 Adrien Bilal, Hugo Lhuillier
The rise in outsourcing in France between 1997 and 2007 increased aggregate output by 1% and reduced the labor share by 3 percentage points.
Topics:  Employment & Wages, Industrial Organization
View All