Skip to content
Key Takeaways
For some individuals with high levels of debt and no means to pay it all back, bankruptcy can mean a fresh start by offering creditors partial repayment while remaining debts are forgiven. This new beginning is not painless for debtors, as they must liquidate personal property, which means not only cash, stocks, or bonds, but can also include such items as collectables and family heirlooms. For creditors, bankruptcy may offer at least some repayment but often leaves them wanting.

Bankruptcy, whether for consumers or businesses, is complicated and comes in numerous forms, but in general it serves the scenario described above: to legally resolve an untenable financial situation involving largely unpayable debts to creditors seeking redress. For US consumers the rate of bankruptcy increased five-fold from the early 1980s to early 2000s (0.4 to 1.5 percent of households), which led to congressional passage of a 2005 bill that made consumer bankruptcy filing more onerous, more expensive, and less financially beneficial.

While the intent of the law was mainly to reduce bankruptcy filings that were attributed to abuse—consumers, say, who intentionally ran up credit card debt and then filed for financial relief—critics argued that such abuse was limited and that the new bill would harm consumers experiencing high medical bills or job loss. Additionally, proponents argued that credit card companies would pass along savings from reduced bankruptcy filings to customers in the form of lower interest rates, a claim doubted by critics.

Into this debate comes “The Economic Consequences of Bankruptcy Reform,” by Tal Gross, Raymond Kluender, Feng Liu, Matthew J. Notowidigdo, and Jialan Wang, which finds that the 2005 law significantly reduced the number of bankruptcy filings, which resulted in lower credit card interest rates. However, the law also indiscriminately impacted individuals, including those suffering a major health incident without insurance who would have otherwise benefitted from bankruptcy. These findings are especially timely given current discussion surrounding reform of the 2005 law. 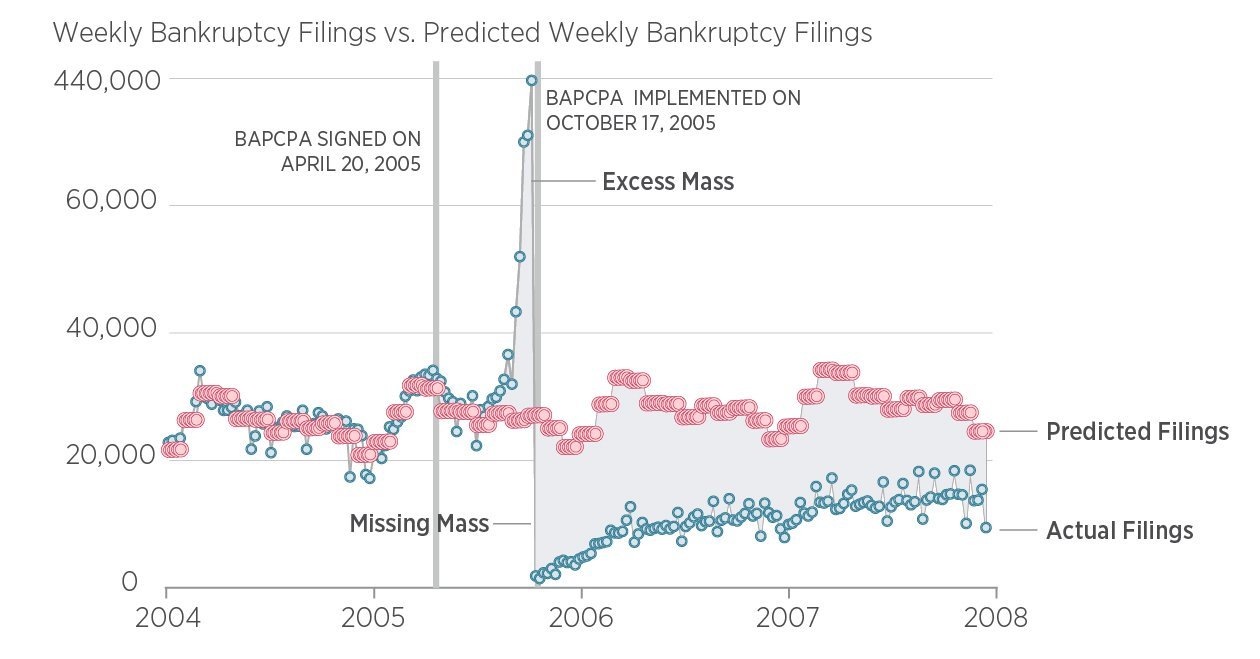 The benefits and costs of a “fresh start”

The answer to the first question is that bankruptcy filings fell considerably—eventually. BAPCPA had the opposite effect in the months immediately before the reform, with a net increase in filings of more than 750,000 as consumers rushed to file before the law took effect. Over time, though, bankruptcy filings fell by roughly 50 percent. Net of the short-run increase during the “rush- to-file period,” the authors estimate that there were roughly one million fewer bankruptcy filings in the two years after BAPCPA than would have occurred without the reform.

Notes: The sample consists of individuals aged 25–64 who are hospitalized without insurance in California, additionally split by the timing of the hospitalization (January 2003 through December 2004 for the pre-BAPCPA sample, October 2005 through December 2007 for the post-BAPCPA sample). The points represent the estimated effects of event time (i.e., the μmq estimates from the non-parametric event study in equation) and the lines represent the parametric event study in equation.

As for interest rate pass-through to credit card holders, the authors find that the answer is affirmative: they find that a one-percentage-point decline in bankruptcy-filing risk decreases average interest rates by 70–90 basis points. This results comes from comparing consumers across the credit score distribution that were affected differentially by the reform. Detailed analysis aside, the broad point is clear: a meaningful share of the cost savings to creditors was passed on to consumers in the form of lower interest rates.

Over time, bankruptcy filings fell by roughly 50 percent after the 2005 reform law. Net of the short-run increase during the “rush- to-file period,” the authors estimate that there were roughly one million fewer bankruptcy filings in the two years after BAPCPA than would have occurred without the reform.

Next, the authors addressed the important issue of who was prevented from filing bankruptcy because of BAPCPA when, indeed, they could have benefited from the relief; in this case, the authors considered the adverse shock experienced by consumers when confronted with hospitalization. The results were stark. They find that an uninsured hospitalization increases the likelihood of filing for bankruptcy by 1.5 percentage points prior to BAPCPA, but by just 0.4 percentage points after the reform. Put another way, the authors find that uninsured hospitalizations result in a similar amount of debt sent to collections under both bankruptcy regimes, but 70 percent fewer bankruptcy filings after the reform. This reduction is persistent over time.

This final finding represents a key contribution of this research. Hospitalization is just one example of an adverse shock, but to the extent that this finding generalizes to other types of financial setbacks, these results provide suggestive evidence that the bankruptcies deterred by BAPCPA were not limited to the most “abusive” filings. Instead, these results imply that BAPCPA may have meaningfully reduced the insurance value of bankruptcy.

While bankruptcy can provide insurance for US households facing an adverse shock like hospitalization, it also increases the cost of doing business for credit card companies, which ultimately means higher interest rates for all credit card consumers. A 2005 congressional law meant to turn back the rising tide of personal bankruptcies and to decrease the cost of credit card borrowing achieved those goals, but also left some unintended consequences in its wake.

CLOSING TAKEAWAY
Hospitalization is just one example of an adverse shock, but to the extent that this finding generalizes to other types of financial setbacks, these results provide suggestive evidence that the bankruptcies deterred by BAPCPA were not limited to the most “abusive” filings. Instead, these results imply that BAPCPA may have meaningfully reduced the insurance value of bankruptcy.

According to this important new research, the Bankruptcy Abuse Prevention and Consumer Protection Act of 2005 (BAPCPA) induced a net reduction of roughly one million bankruptcy filings in the two years after implementation, but the authors found no evidence that most of those million were wealthier households. Lower-income households facing adverse financial shocks, in other words, were just as likely to miss out on the “fresh start” that bankruptcy can bring as higher-income households.

The good news for all consumers, though, is that the authors find that a one-percentage-point reduction in bankruptcy-filing risk leads to a 70–90-basis-point decline in offered credit-card interest rates.

Together, these findings highlight the stark trade-off facing policymakers: consumers may benefit substantially from a more generous bankruptcy system, but these benefits come at the cost of higher interest rates for all consumers. And these findings arrive at a time when policymakers are considering changes to BAPCPA. Understanding the costs and benefits of a bankruptcy system is crucial to ensuring that bankruptcy reform serves its designed purpose.