Skip to content
Key Takeaways
The promise of the American dream is about the possibility of upward mobility; namely, that anyone, regardless of where they were born and what class they were born into, can achieve success on their own terms.

Together with the recent dramatic rise of income inequality, US cities have experienced a steady increase in residential segregation by income that challenges the roots of the American dream. A new paper by Alessandra Fogli, economist and monetary advisor at the Federal Reserve Bank of Minneapolis, and Veronica Guerrieri, professor of economics at UChicago Booth School of Business, focuses on the interconnection between inequality and residential segregation. Recent research by Raj Chetty and Nathaniel Hendren has estimated the effects of exposures to better neighborhoods on children’s future earnings. Fogli and Guerrieri use these micro estimates to study the macroeconomic implications of these neighborhood effects. They show that residential segregation significantly amplifies the increase in inequality in an economy where technological progress increases the skill premium.

This is an especially salient finding following the Great Recession, which has left many less educated workers struggling to recover their previous standard of living. For those residing in certain neighborhoods of US cities and who already face an uphill battle, that climb is even steeper. For policymakers and others concerned about income gaps in the United States, the authors’ findings suggest that they should pay attention to the geography of cities, possibly considering policies of affordable housing or reforms in public school funding aimed to reduce residential segregation by income.

Chart
Figure 1: Inequality and Segregation across US Metros

The Curse of Living in Poor Neighborhoods

Fogli and Guerrieri develop a model that reflects these features. There are two neighborhoods, A and B, where A is the neighborhood with positive spillovers on children’s education. Families choose the neighborhood where their kids are growing up, but because everybody would like to live in neighborhood A to give more opportunities to their children, house prices in A are high and residential segregation by income rises.

Now, consider the advent of the information and communication technology revolution that has substantially increased the returns to skilled jobs relative to unskilled ones. When the skill premium increases, inequality mechanically increases because high-skilled workers, whose income was already higher, will now get a higher premium. However, Fogli and Guerrieri show that this is not the end of the story. As the skill premium increases, families will care even more about their children’s education. However, as inequality increases, rich families will become even richer and will be willing to pay more for their children’s education, including the opportunity to have their kids grow up in the best neighborhoods. This will drive house prices up in those neighborhoods more, pushing out less fortunate families more. As a result, income segregation will increase further, and differences in neighborhoods will become larger. For example, rich neighborhoods will collect higher taxes and improve the quality of public schools further, richer families will reinforce more social norms conducive to academic success, and so forth. In turns, this means that richer children will be exposed to stronger spillovers and will have higher income opportunities in the future. This will feed back into even higher inequality.

Note: This figure compares the response of inequality to the skill premium shock in the baseline model (yellow) to the response of the economy when families are randomly re-located between the two neighborhoods every period after the shock (light yellow). The figure shows that segregation contributes to 18% of the increase in inequality one period after the shock, that is, between 1980 and 1990, and to 28% of the increase in inequality over the whole period between 1980 and 2010.

How important is this feedback loop between income inequality and income segregation in the US economy? In other words, to what extent does residential segregation exacerbate the response of inequality to technological shocks that increase the returns to education? Do the very incentives that cause parents to seek the best education for their children ultimately widen the income gap over time and across space?

The answer is yes, according to Fogli’s and Guerrieri’s model, and it’s an emphatic yes.

To show this result, the authors calibrate their model using salient features of the US economy in 1980 and the micro estimates of neighborhood exposure effects. Then they study the response of the economy to a “skill-biased technical change shock,” that is, a change in technology that increases the productivity of high-skilled jobs, and, hence, increases the earnings of the more and better educated workers. This is what happened in the US economy during the 1980s, and is considered one of the primary reasons for the widening income gap in following decades. The main contribution of the paper is to quantify how much of the subsequent increase in inequality is due to the presence of neighborhood effects and the resulting residential segregation. To this end, the authors compare the response of the benchmark model to the response that would arise if families were randomly re-located across neighborhoods and the segregation channel was muted. The authors show sizeable results: segregation contributed to 28 percent of the increase in inequality in response to skill-biased technical changes between 1980 and 2010.

The more that skill premia drive disparity in wages, the more places like Neighborhood A will continue to gain an advantage, as children in those neighborhoods are better positioned to learn, adapt, and earn more than children in poorer neighborhoods. Skill premia act like a widening wedge, driving future generations of rich and poor children further apart.

Chart
Figure 3: Share of Rich Households in Chicagoland (those in the top 20th percentile) in 1980 and 2010

Income inequality is at the forefront of many US policymakers’ concerns. How can we give the opportunity to the children of poor families to climb up the income distribution? Fogli and Guerrieri show that residential segregation matters. They do not offer specific policy proposals in the paper, but their results suggest that policymakers should pay particular attention to the geography of cities. Potential policies could improve schools in poor neighborhoods, but also could re-think school assignment models, school funding reforms, and affordable housing programs.

CLOSING TAKEAWAY
Assuming that better-educated workers will continue to reap the benefits of an increasingly technical economy, and also assuming that these effects will serve to increase residential segregation over time, the American Dream of upward mobility may become just that for many children in poor neighborhoods—a dream.

The authors’ findings that residential segregation can account for more than 20 percent of the increase in inequality since 1980 are especially sobering. Assuming that better-educated workers will continue to reap the benefits of an increasingly technical economy, and also assuming that these effects will serve to increase residential segregation over time, the American Dream’s promise of upward mobility may become just that for many children in poor neighborhoods—a dream. 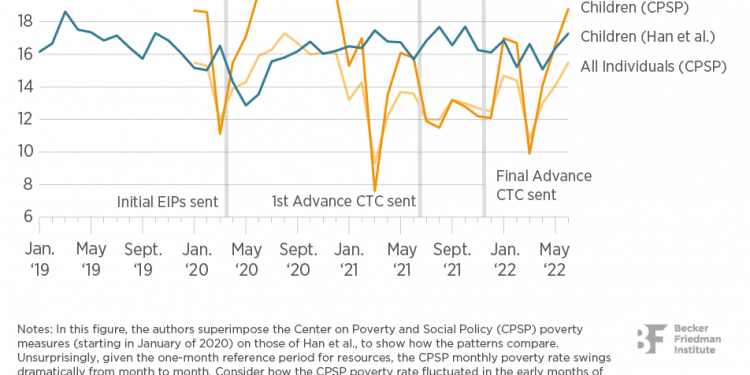