The economic news in 2007 and 2008 from Greece was alarming and sent ripples across Europe and the Atlantic. After a decade where real gross domestic product (GDP) per capita growth exceeded 30 percent, Greece’s economy was suddenly in freefall. The country would experience a contraction in real GDP per capita of roughly 20 percent between 2007 and 2017, prompting extraordinary financial relief measures from the International Monetary Fund (IMF) and European institutions, and culminating in the first IMF default by a developed country in 2015.1

While many of the world’s developed economies experienced significant downturns following the Financial Panic and Great Recession of 2007-09, Greece’s experience was unique in its severity and persistence. In their new paper, “The Macroeconomics of the Greek Depression,” Gabriel Chodorow-Reich, Loukas Karabarbounis, and Rohan Kekre investigate the driving forces of the Greek boom and bust by focusing on the relationships among product, labor, and financial markets and, importantly, on the effectiveness of fiscal and monetary policies.

Understanding the Greek economy’s performance and policymakers’ actions over this 20-year span holds important lessons for all developed countries, especially regarding the fiscal response to economic crises and the effectiveness of financial bailouts of banks.

Chart
Figure 1 · Greece in Relation to Other Depressions

Note: This figure displays episodes where mean real output per capita declined between a peak and ten years following the peak. The authors define peak as when real GDP per capita exceeds the maximum of the previous three and succeeding two years. Each bar shows the mean real GDP per capita gap relative to the peak. The authors’ sample covers all upper middle and high-income countries according to the World Bank definition between 1960 and 2019, excluding oil producers and tax havens.

The authors begin by first examining the driving forces of the Greek boom and bust and then, crucially, assessing the degree to which fiscal and financial policies may have amplified or mitigated the depression. To do so, the authors develop a model of a small open economy operating within a currency union. The model features households which differ in their earnings and degree of credit market access, multiple sectors of production, a banking sector, a government sector, and an external sector (the rest of the Eurozone). The model is informed by a detailed analysis of the economic events that enfolded in Greece during the boom-and-bust periods. This model closely approximates Greece’s actual experience.

Is it possible that expansionary fiscal policies during the boom ultimately led to less output over the long run? The answer is yes. The authors reveal that removing the debt-financed rise of household transfers during the boom and reallocating the freed-up resources to reduce capital taxes during the bust, would generate output gains of more than 15 percentage points by 2017.

In terms of the boom, the increase in demand – for traded goods by the rest of the world, and for non-traded goods by the government – account for the largest fraction of the increase in production, labor, and capital in the early 2000s. The consumption boom, facilitated by increased external borrowing, was driven by realized and perceived transfers to households and by actual transfers to the government. People were feeling relatively wealthy, in other words, and they acted like it.

As for the bust, financial conditions deteriorated and declines in factors of production (capital and labor) cycled downward, as did what economists call total factor productivity (TFP), or the portion of an economy’s output that cannot be attributed to the accumulation of capital and labor. However, these were only symptoms of the persistent decline in output. The authors reveal one of the key causes to be changes in tax policy, which was a major policy tool wielded by the Greek government to address its budgetary crisis. Indeed, the authors find that Greek tax policies contributed to an output drop of 18 percentage points between 2007 and 2017.

This was owing, in part, to an increase in the fraction of taxes that firms had to prepay before revenues were realized, which led to an increase in the cost of borrowing from banks and a decline in factor demand (or the willingness of firms to invest in factors of production). At the same time, the significant increase in capital tax rates depressed factor demand and the utilization of those factors, the latter of which explains lower measured TFP.

Consumers, meanwhile, pulled back their levels of spending in large part from fears of long-term unemployment. All told, consumption expenditures plummeted by 14 percentage points.

Given this explanation, what would have happened if Greek policymakers had depended less on tax increases and more on, say, budget cuts in response to the downturn? The results from the model simulation are clear: The authors find that the bust in output would have been 6 percentage points smaller by 2017 if the burden of fiscal consolidation was shifted from tax increases to budget cuts.

How about the boom? Is it possible that expansionary fiscal policies during the boom ultimately led to less output over the long run? The answer is yes. The authors reveal that removing the debt-financed rise of household transfers during the boom and reallocating the freed-up resources to reduce capital taxes during the bust, would generate output gains of more than 15 percentage points by 2017.

Another important policy question for the Greek government—and for governments around the world—was the external bailout provided to Greece from the IMF and European institutions. This debate mirrors the controversy surrounding US policymakers’ reaction to the Financial Crisis and Great Recession as they funneled funds to large financial institutions to stem systemic risk. In the United States, these actions reawakened a long-standing tension between large and small businesses and financial institutions, popularly described as “Wall Street vs. Main Street.”

On the Greek bailout question, the authors’ findings clearly align with the benefits of financial bailouts.  Better capitalized banks can lend at lower interest rates to firms and households.  The authors find this effect for Greece to be even more stimulative than government spending or tax cuts. In total, the bank bailout component of external assistance increased output by roughly 4 percentage points by 2017 relative to a counterfactual in which Greece had used these resources to increase spending or cut taxes.

Conclusion
Despite the attention that they generate, depressions as severe and persistent as Greece’s remain mysterious to researchers, in part because they happen so rarely. This research provides new insights on their causes and optimal policy responses by applying a rich macroeconomic model to the recent Greek Depression. The authors find that increased demand from the rest of the world and the government fueled the boom in production in the years leading to the 2007 downturn; at the same time, realized or anticipated external transfers fueled the boom in consumption.  Contractionary tax policies by the Greek government, amplified by a decline in factor utilization and financial frictions, drove the largest fraction of the bust in production, while rising risk factors were prominent factors in the drop in consumption and prices, as well as the sudden stop of capital flows.

CLOSING TAKEAWAY
Better capitalized banks are able to lend at lower interest rates to firms and households. The authors find this effect for Greece to be even more stimulative than government spending or tax cuts.

An important contribution of this work is the authors’ evaluation of the effectiveness of alternative policies. The authors find substantial benefits if Greece had avoided the debt-financed rise of household transfers in the boom, and used the additional fiscal space to reduce capital taxes in the bust. Further, they find that fiscal policy amplified the depression by concentrating the burden of adjustment on taxes instead of spending and by raising the fraction of taxes that firms prepay before revenues are realized. By contrast, equity injections to banks mitigated the depression by lowering the cost of borrowing.

US corporations go to great lengths to avoid paying taxes, and some of those avoidance schemes—like moving profits to offshore tax havens—regularly make headlines. However, there are many more subtle techniques to reduce a corporation’s tax bill, and those methods are often practiced by tax accountants with firm- or industry-specific skills. Employing these tax experts can have beneficial effects and provide competitive advantages for firms.
Topics:  Employment & Wages, Tax & Budget 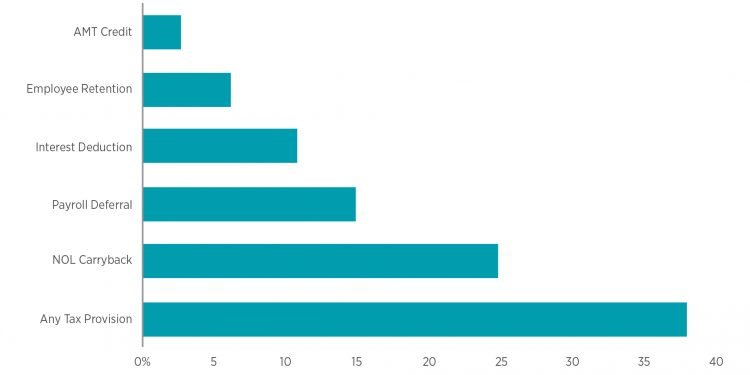 Did the Corporate Tax Breaks in the CARES Act Benefit Firms Most Impacted by COVID-19?