Skip to content
Key Takeaways
Economists typically presuppose that the absence of state capacities to raise official revenue to finance public service is a key factor in the persistence of so-called weak states. However, so-called “weak states” often have a strong “real” capacity to raise revenue and organize public service—albeit not along official lines.

Given the dearth of data on what are, essentially, illegal activities amounting to corruption organized by managers within state agencies, researchers have been limited in their ability to examine this phenomenon. This novel research, though, draws on three years of empirical and qualitative work to investigate the economic organization of the real state in a specific agency—the traffic police agency of the Democratic Republic of the Congo (DRC)’s capital Kinshasa in 2015—to study how officials organize unofficial revenue generation, to analyze what share of revenue is generated through such organization, and to determine whether its existence as a system creates social costs or benefits above those that would be created by independent unofficial practices.

Their rich dataset allows the authors to ask a key question: In a weak state managed by agents who demand unofficial revenue, which form is worse—organized or independent illegal activities? The authors’ answer is clear: Organized corruption creates profits and distortions beyond those attainable by individual agents. This unprecedented work has implications beyond traffic management in Kinshasa, and offers insights for policymakers, planners, and researchers on the real operations of weak states throughout the world. 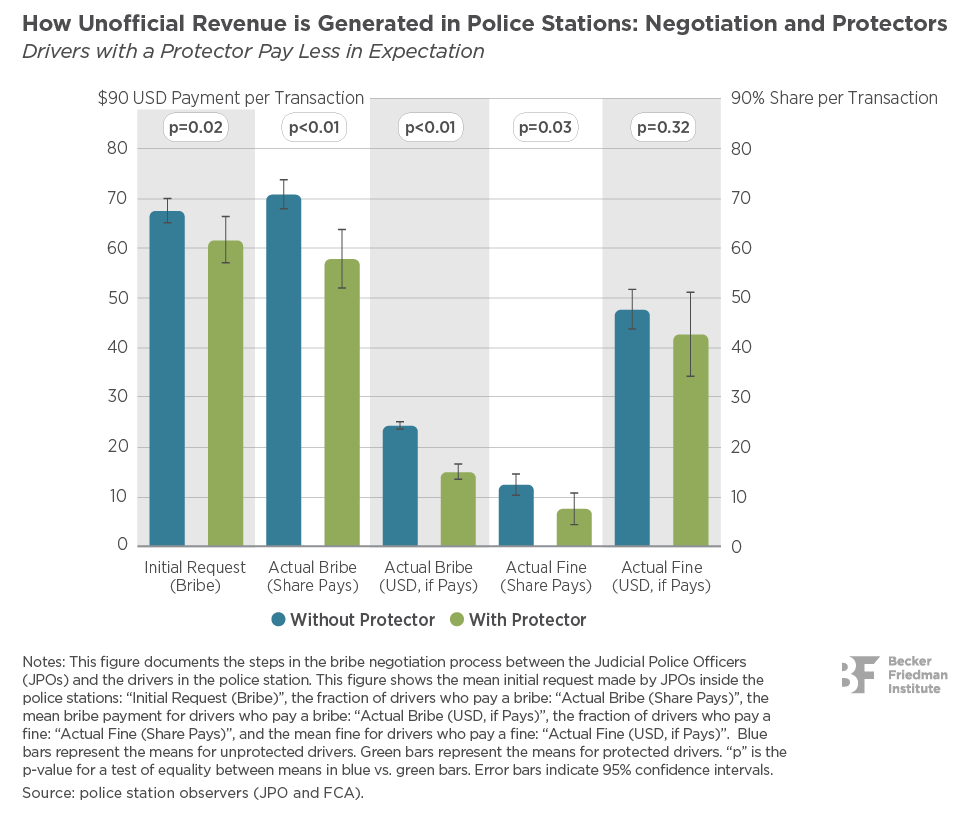 It’s nothing personal, but I’ve got a quota to fill

Before describing the authors’ methodology and findings, it is useful to understand the real state in Congo, at least as exemplified in Kinshasa’s branch of the traffic policy agency in 2015. The official dual mandate of the agency was to manage traffic flows to prevent congestion, and to issue official charges to drivers who violate the traffic code. Police commanders (or managers) at police stations deployed police officers (or agents) to the intersections in teams to manage traffic, and to escort drivers who violated the code to the police station, so that the managers could issue a charge. So far, so good. This sounds like any official traffic control effort.

Unofficially, though, drivers paid bribes to the agents in the street through a system of toll fees to avoid being escorted, and to managers in the police station to avoid charges. These payments, or corruption, were considered unofficial revenue (i.e., they do not add to the public revenue of the state), in contrast to revenue from legitimate traffic fines, which was considered official (i.e., they do add to public revenue). Further, the method of unofficial fine revenue collection was not left to chance or the whimsy of agents; rather, unofficial revenue hinged on a “quota scheme” whereby managers ordered agents to escort a certain number of drivers each day to the police station so managers could directly extract bribes. Contributing to maximize the revenue generated by the system, managers also occasionally forged evidence when drivers had not made a clear violation, using this extortion to extract payments from drivers. 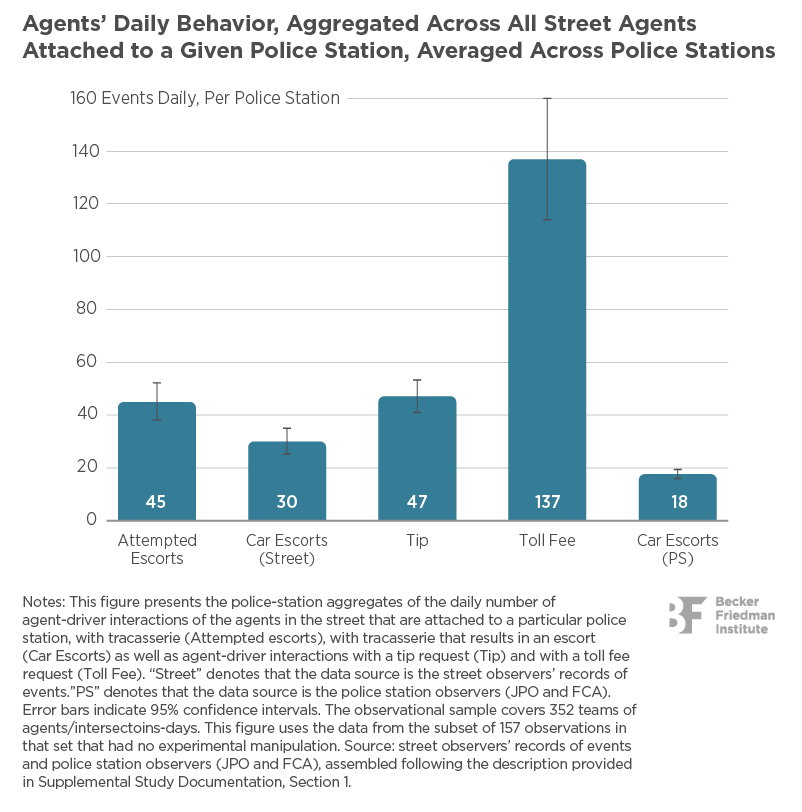 As for their methodology, the authors’ research is grounded on a large and unique dataset, including 13,254 police agent/driver interactions observed at intersections, 3,345 manager/driver interactions observed inside police stations, 2,997 hourly observations of traffic outcomes at intersections, and 327 team of agents-day quota level agreements, covering half of one of the two battalions of the traffic police agency with jurisdiction over half of Kinshasa. The authors also conducted many qualitative interviews.

To collect this dataset, the authors trained and worked with 160 individuals to implement six independent wide-casting research operations within the agency, allowing an unprecedented snapshot of the inner workings of a state agency in which corruption has spread through the hierarchy. This effort included recording all transactions between drivers and agents, the quota schemes, the details of all transactions that occurred inside police stations, the properties of public service in real time, and the schemes developed between managers and higher-level officials. To gather this data, they collaborated openly with some agency employees and surreptitiously recorded other conversations. Please see the full paper for more details on this extraordinary data-gathering effort.

The authors’ empirical findings include the following:

How socially costly is the component of corruption that is organized by managers?

On the one hand, it is intuitive to imagine that such a system has a social cost, by discouraging agents to manage traffic and instead fabricate allegations and escort drivers. On the other hand, the quota system may discourage drivers from violating the law to avoid paying a bribe or a fine. For example, if you know that the least infraction may result in you being hauled, often violently, to the police station to face a shake-down, you might drive more carefully.

The method of unofficial fine revenue collection was not left to chance or the whimsy of agents; rather, unofficial revenue hinged on a “quota scheme” whereby managers ordered agents to escort a certain number of drivers each day to the police station so managers could directly extract bribes.

So, to derive the social cost from this organized form of corruption, the authors developed a randomized experiment where managers requested a quota that was, at most, half the mean level for that team of agents, on randomly selected days (the managers were compensated for their lack of unofficial revenue). This allowed the authors to compare public service under the current system vs. that with agent corruption alone. Spoiler alert: Decreasing the quota and, hence, mitigating its effect, the authors find that the quota worsens the agency’s ability to fulfill its first mandate (to manage traffic), while not improving its ability to fulfill the second (to enforce the traffic code). In particular, the authors find the following:

This unprecedented work offers a deep look into the real governance of an agency within a weak state, in this case the police traffic agency in Kinshasa, Congo, in 2015. This system of corruption involving managers generates significant revenue for the agency and directly worsens traffic outcomes, while it does not appear to incentivize drivers to comply with the driving code—additional arrests caused by the system are likely driven by false allegations.

What lessons does this work hold for planners and policymakers looking to reduce the influence of corruption in weak states? One commonly suggested antidote to corruption is to pay traffic officers, in this case, a wage that exceeds their unofficial option: if the risk of detection and dismissal is sufficiently large, the officers could be deterred with a sufficiently high wage. However, if agents have more income, managers often demand a slice of the pie, by demanding a higher quota or even begin taking a cut of the agents’ income.

Indeed, in ongoing research, the authors have determined that managers tax 30 percent of such income, but this taxation occurs almost only when the cash transfer produces inequality between teams of agents, consistent with the distribution of unofficial income being important in the preservation of the system. Managed corruption, in other words—once it is systematized in a weak state—appears difficult to unwind.

While it is common to note at the end of such briefings that more research is needed, and that is certainly true in this case, it is also important to acknowledge that future work will certainly be influenced by the pathbreaking insights of this research on real governance within weak states. For years, the literature has focused on the effects of independent illegal activity, but this work shines a bright light on the profits and distortions—including social cost—of organized corruption. 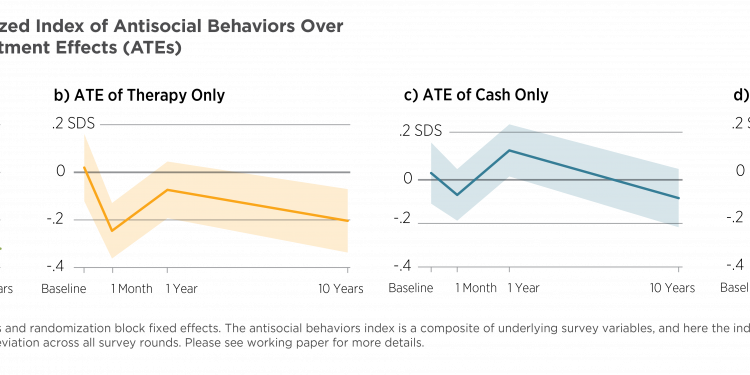 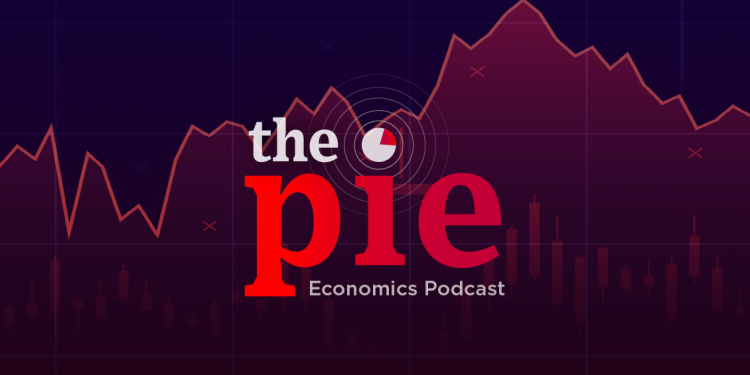 How Does Access to Safe Water Affect Child Mortality?