Skip to content
Key Takeaways
The past 40 years have seen labor’s share of US corporate-sector income (or value added) fall five percentage points vs. the share going to capital, from 62.9 percent to 57.9 percent. This decline in labor’s share has not only fueled calls for higher taxes on the wealthy to stem growing inequality but has also led to dire warnings about the future of democracy should this trend persist, a lá Thomas Piketty’s 2014 Capital in the Twenty-First Century.

However, what if the make-up of that five percentage points isn’t so obvious? Whether income is categorized as capital or labor is, in large part, determined by the tax code. Over the last 35 years, the US tax code has changed such that some companies, especially mid-sized service firms, have shifted between distributing income to owners as capital or labor income depending on which is most beneficial in each tax regime. Either way, the work has not changed; the only difference is how compensation is reported as income. Given this phenomenon, what is the true meaning of those 5 percentage points? Does the 57.9 percent labor share reflect an accurate accounting of labor income?

These questions, among others, motivate this new research, which finds that changes in the tax code, beginning with the Tax Reform Act of 1986, initiated reallocation among firms over the following decades that accounts for about one-third of the 5 percentage point decline in labor’s share of corporate-sector income between 1978 and 2017. For policymakers and others concerned about income disparities, these and other findings highlight the important role of tax policy when measuring income shares.

Before reviewing the authors’ findings and key lessons, a brief discussion of relevant US tax policy is in order. To begin, the decline in labor’s share of corporate-sector value added coincided with a striking rise in the share of business activity organized in “pass-through” form, where businesses are not taxed at the corporate level but where income passes through to owners and is taxed as individual income. As the authors show, these trends are related.

Why would growth of the pass-through sector, which now accounts for the majority of business income, matter for the corporate-sector labor share? The simple answer is taxes. Entrepreneurs have flexibility to characterize their income as labor payments or as profits and typically choose the label that minimizes taxes subject to the tax code.

Why would growth of the pass-through sector, which now accounts for the majority of business income, matter for the corporate-sector labor share? As suggested above, the simple answer is taxes. Entrepreneurs have flexibility to characterize their income as labor payments or as profits and typically choose the label that minimizes taxes subject to the tax code. In recent years, the pass-through label has been profitable for a growing number of firms. At the same time, the composition of corporate-sector firms has changed, with many labor-intensive firms—like accounting firms, law firms, and medical practices—now organized outside the corporate sector as tax-preferred partnerships.

Things began to change following the Tax Reform Act of 1986 (TRA86), which lowered personal income tax rates substantially and raised the tax burden on (non-pass-through) C-corporations (or those entities taxed separately from their owners). As a result, by organizing in pass-through form, entrepreneurs avoided C-corporation taxes and benefited from lower effective tax rates. Subsequent changes in payroll taxation and in the legal treatment of pass-throughs raised the benefits and feasibility of adopting pass-through form, accelerating the pace of this sector’s growth.

Pass-through income: Business entities that are not taxed at the business entity level pass the income through to the owners, who are taxed at the individual or owner level, typically sole proprietorships, S-corporations, and partnerships.

C-corporation: Any corporation taxed separately from its owners.

S-corporation: Business entities that pass corporate income, losses, credits, and deductions to shareholders, who are primarily individuals, to include on their tax forms.

Partnership: Business entities that pass corporate income, losses, credits, and deductions to partners, which can include individuals, non-profits, corporations, and foreign owners.

The authors conduct a two-part analysis to quantify the contribution of the pass-through sector to the decline of the labor share. First, they reclassify a portion of S-corporation value added. Using data on 183,000 firms that switched from C-corporation to S-corporation between 2000 and 2012, the authors estimate that 1.22% of aggregate S-corporation sales can be recharacterized as labor payments. This behavior implies the decline in labor payments captures a reporting response, as owner-managers compensate themselves in the tax-preferred form of S-corporation profits. Had these firms remained C-corporations, owner-managers would have likely continued to pay themselves via labor income to avoid payout and corporate tax. Reclassifying 1.22% of aggregate S-corporation sales increases the corporate-sector labor share by 0.89 percentage points in 2017.

Together, these two adjustments imply the 5-percentage-point decline in the labor share is overstated by 32%. The extent of understated labor income has grown over time in line with the pass-through sector’s expansion. In the 1990s, the growth of S-corporations accounts for most of this effect, whereas partnerships play a larger role in more recent years.

Finally, as noted above, more than half of the adjustment comes from skilled service firms in capital-light industries, such as law firms, consultancies, doctors’, and dentists’ offices, and financial service firms such as hedge funds and private equity funds. Such medium-sized firms account for a disproportionate share of pass-through value added, while large, capital-intensive manufacturers are more prominent as C-corporations. After accounting for downward bias among mid-market service firms, what is the likely explanation for the decline in labor share? The authors’ analysis suggests a larger role for superstar firms (large entities driving sectoral productivity and concentration, including outsized influence on labor markets) and the manufacturing sector (where capital-intensive activity has replaced labor and offshoring has displaced labor) to drive the remaining decline in the labor share.

The authors draw several lessons from their analysis, including that

This last point is especially salient for policymakers, especially if they hope to craft tax policy that addresses real—rather than perceived—changes in the capital and labor shares of economic activity. One implied policy response from this analysis is to harmonize taxes such that business owners would be disincentivized to change their firms’ tax structures in response to changes in policy. Case in point: Following the 2017 tax reform, firms once again face new incentives to select a tax-minimizing corporate form. As this research reveals, investigating future trends in the labor share will require a deeper understanding of the nuances of the tax code.

Manasi Deshpande, Michael Mueller-Smith
Losing Supplemental Security Income (SSI) at 18 increases the number of criminal charges over the next two decades, with the costs of enforcement and incarceration from SSI removal approaching the savings from reduced SSI benefits.
Topics:  Fiscal Studies 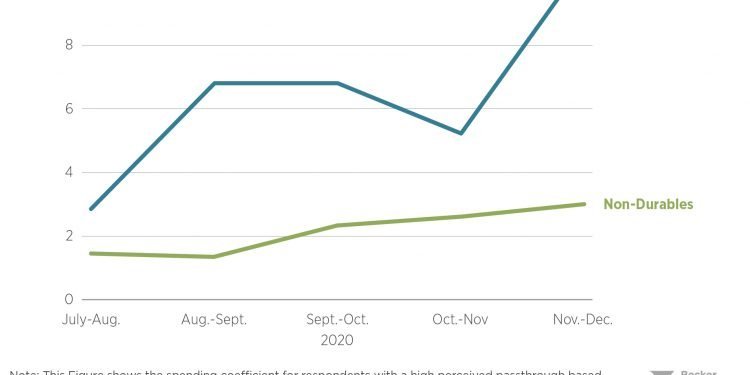 Rüdiger Bachmann, Benjamin Born, Olga Goldfayn-Frank, Georgi Kocharkov, Ralph Luetticke, Michael Weber
A temporary reduction in Germany’s value added tax in the second half of 2020 led to a 36% increase in durable spending for individuals with a high perceived pass-through, along with an increase in semi- and non-durable spending; in addition, aggregate consumption spending rose by 34 billion Euros.
Topics:  Fiscal Studies
View All