Skip to content
Key Takeaways
When most people think about international trade, they likely imagine large companies trading goods back and forth among many countries, and they likely picture rows and rows of colorful intermodal containers stacked on huge transport ships.

Intuitively, this may make sense, but how can we measure such trade effects? New research by Emmanuel Dhyne of the National Bank of Belgium, Ayumu Ken Kikkawa of UBC, and Magne Mogstad and Felix Tintelnot of UChicago’s Kenneth C. Griffin Department of Economics, employs firm-level data from Belgium that offer revealing insights into the broader economic impact of trade. In “Trade and Domestic Production Networks,” the authors show the importance of indirect trade, whereby firms buy or sell from other firms that directly import or export, and why policymakers from all open-market countries need to consider the broader ramifications of trade policy.

Note: This figure shows the distributions of direct and total import shares across firms. Most firms rely a lot on foreign inputs, but only a small number of firms show that dependence through the direct imports observed in trade transaction data. While only 19 percent of firms import directly, nearly all firms use some foreign inputs in production.

The availability of firm-level data has allowed researchers to look beyond broader country-based data to investigate the impact of trade on a more micro level. One insight from these datasets is that relatively few firms actually import or export, in part due to the complexities and, thus, the corporate infrastructure necessary to navigate international commerce. However, this does not mean that only a few firms are affected by changes in trade policy, as many often-smaller firms buy from or sell to importers and exporters. Thus, trade policy’s impacts can ripple throughout an economy and have larger-than-anticipated effects.

To expand our understanding of this phenomenon, the researchers combine data on domestic Belgian firm-to-firm sales with information on firms’ foreign trade transactions. The Belgian data offer a unique view into the impact of trade, including information into input factors and output, intra-EU information on imports and exports, and a value-added tax registry that provides data on domestic firm-to-firm transactions. Putting these data to work, the authors construct measures of trade that go beyond direct business between firms to include the total share of a firm’s indirect imports and exports, and they find the following results:

What happens in the event of a foreign demand shock? Importantly, the authors find that what matters is not the trading status of firms—whether they are involved directly or indirectly in foreign trade—but how much of firms’ revenue ultimately gets exported. In the case of the example given above, where a caterer benefits from an increase in direct trade by a client firm, both the caterer and the trading firm see similar revenue boosts, for example, when exports increase. 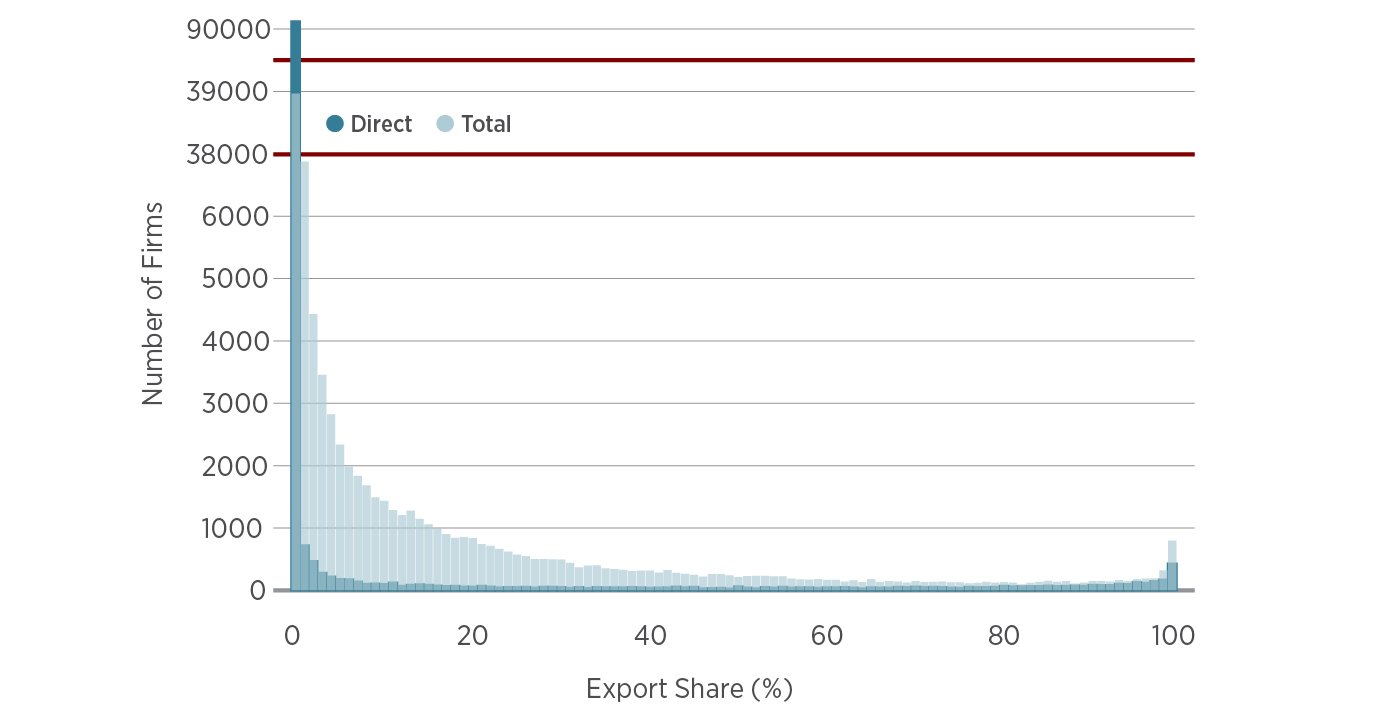 Though based on a close examination of Belgian firm data, these results offer insights into the domestic economies of other open economies including the United States, according to the authors, especially on firms’ dependence on trade, regardless of whether those firms are directly involved in importing or exporting.

By closely examining firm-level data in Belgium, this work offers new insights into the impact of trade on a domestic economy and holds lessons for all open-market economies, including the United States and EU countries. For policymakers, this research’s findings—that many domestic firms benefit from trade—should give them pause when they consider trade restrictions, for example, or other policies that raise the cost of importing and exporting.

By the summer of 2020, the novel coronavirus had caused massive disruption in travel and also impacted cross-country supply chains. This timely research suggests that as policymakers consider the impact of COVID-19 on trade patterns and how trade policy may need to respond, they need to consider the broader impacts of export-import markets. Though the direct impact of foreign trade may be a relatively small part of most open economies, its true impact is much greater, as many firms indirectly benefit from the flow of goods and services across boundaries.