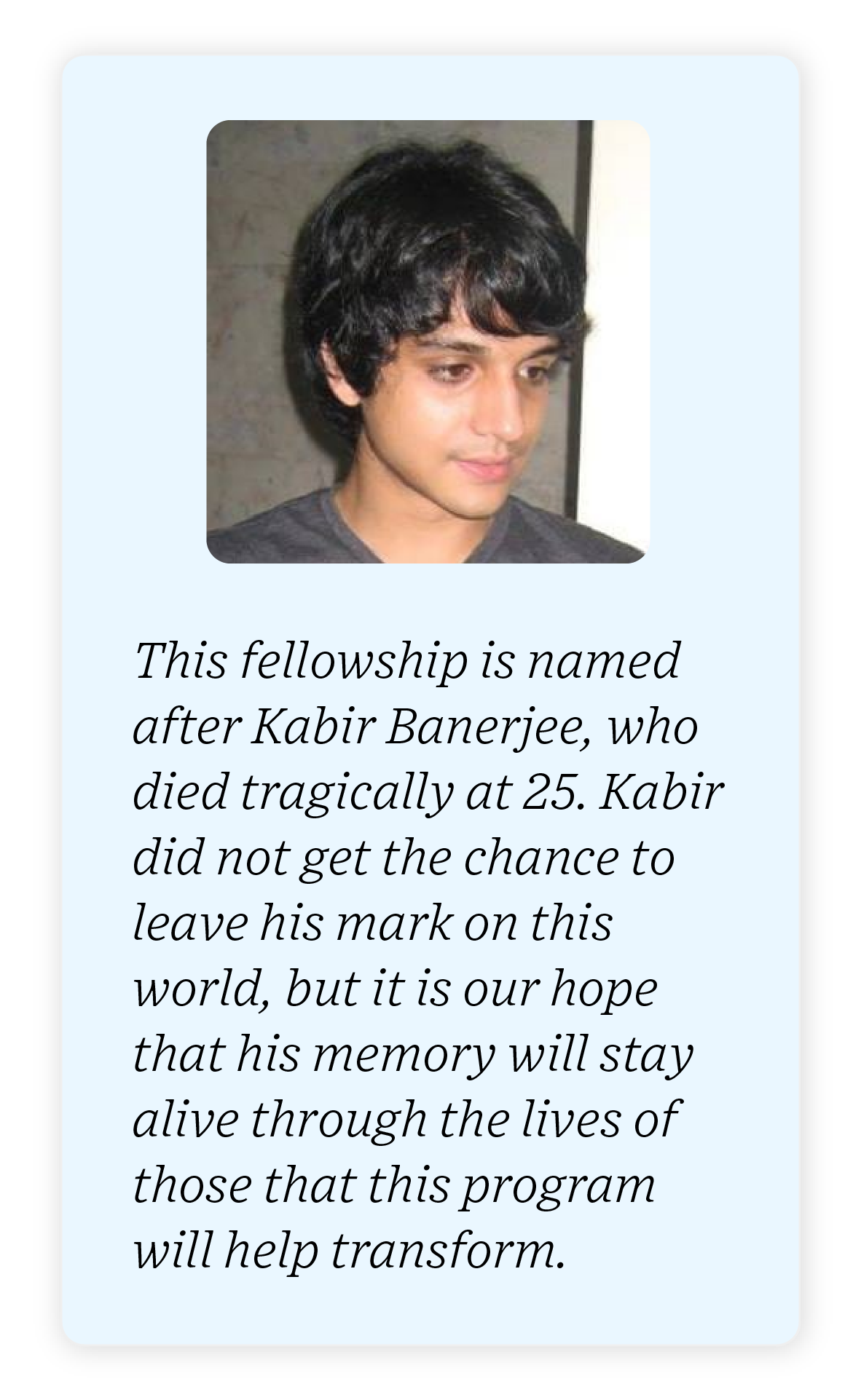 Founded to honor the life of Kabir Banerjee, this predoctoral fellowship is an initiative by the Weiss Fund for Research in Development Economics that seeks to expand the representation of researchers from low and lower-middle income countries in leading academic programs in development economics. The Fellowship supports candidates with substantial interest and potential for success in an academic career in development economics who otherwise may have limited access to mentorship and training from leading economists.

The Weiss Fund sponsors Kabir Banerjee Predoctoral Fellows admitted into pre-approved two-year predoctoral positions in leading institutions. Predoctoral programs are intended to serve as a bridge between college and graduate school for students interested in pursuing a Ph.D. Kabir Banerjee Predoctoral Fellows work directly with some of the world’s leading development economists. Launched in 2022, this annual Fellowship works with leading academic institutions to facilitate the hiring of promising applicants.

The Weiss Fund would like to congratulate its inaugural pilot round of Kabir Banerjee Predoctoral Fellowship Finalists!

The Weiss Fund is endorsing fourteen Fellowship Finalists. Those Finalists that go on to be hired will become Kabir Banerjee Predoctoral Fellows.

This year, the Fellowship received almost 250 applications from eligible candidates in 29 countries. Applicants were required to have a Secondary, Bachelor’s, or Master’s degree from an institution in a low- or lower-middle income country, as well as working proficiency in English. Preferred areas of study included Mathematics, Statistics, Engineering, Computer Science, Economics, or related disciplines with an emphasis on quantitative analysis. Each application was assessed on technical skills, motivation, and alternative access for mentorship.

After an intensive vetting process, fourteen candidates earned the endorsement of the Weiss Fund to apply to predoctoral positions with leading economists that have served on the Weiss Fund Committee. Placements this year will be with senior researchers at several institutions including the Massachusetts Institute of Technology, Northwestern University, Stanford University, and the University of California, Berkeley.

The fourteen Fellowship Finalists from the class of 2022 come from seven countries in East Asia and the Pacific, Latin America and the Caribbean, South Asia, and sub-Saharan Africa. Most of these candidates were in the top 10% of their class and obtained an average GRE quantitative score of 166 out of 170. Finalists went through a highly competitive vetting process over the course of four months and showed enormous promise to contribute academically to the field of development economics.

Ayushree works as a consultant at the Boston Consulting Group. She is interested in working in development economics, especially economics of education in India. Working with underprivileged children as an undergraduate student helped her develop an interest in this area. Her secondary interest lies in peer effects and social learning. She completed an undergraduate degree in Economics and Mathematics from the Indian Institute of Technology, Kanpur.

Daniela is a Data Science for Social Good Fellow at the University of Warwick, UK, a program funded by The Alan Turing Institute and Microsoft. She works alongside UNICEF and Save the Children using ML and AI methods to predict multidimensional child poverty in developing countries. She is an experienced Data Scientist that has aided NGOs and government agencies to resolve data quality issues and prioritize evidence-based decision-making through ML solutions. Her research focuses on understanding and solving public policy problems such as unemployment and misinformation through quantitative-qualitative high-impact methods. Daniela is a Master’s candidate for a double degree in Data Science and applied Economics (ITAM). Previously, she completed undergraduate studies in Law and Economic Theory.

Besindone’s research interests include education and urbanization as they relate to opportunity disparities in the developing world. She is also interested in economic history and governance in Africa. She recently earned a Bachelor of Arts with Honors in Economics from the University of Alberta.

Hasan works as a Research Associate at BRAC James P. Grant School of Public Health in Bangladesh. He is working on several RCT projects aimed to address mental health and environmental issues under the supervision of Professor Atonu Rabbani. Prior to joining BRAC JPGSPH, Hasan worked as a Research Associate at the Centre on Integrated Rural Development for Asia and the Pacific (CIRDAP). Hasan is keen to work at the intersection of development, behavioral, environmental, and health economics. He has strong quantitative knowledge, excellent programming skills, and exceptional field management experience. He completed his Bachelor’s and Master’s degree from the Department of Economics at the University of Dhaka. In his leisure time, he likes to play online Chess.

Jean-Baptiste is a research associate at IPA Francophone West Africa. Previously, he worked as an economist and statistician at the Ministry of Agriculture of Burkina Faso. Jean-Baptiste is interested in development economics and, more specifically, in agricultural finance. He believes that specific financial products for the rural population are critical in mitigating their risks (droughts, floods, prices), investing more in their farms, and improving their livelihoods. He received his Bachelor’s degree in Mathematics from the University of Ouagadougou and completed a degree in Statistics and Applied Economics at the Graduate School of Statistics and Applied Economics of Abidjan.

Luong works as a researcher at the Development and Policies Research Center in Hanoi, Vietnam. She is passionate about development economics and is particularly interested in learning about the lives of the poor and ways to alleviate poverty. She also takes a great interest in learning about and doing research that uses experimental methodologies and behavioral insights to answer questions in development economics. Her goal is to pursue a Ph.D. in economics. Luong received a Bachelor’s degree in economics from Foreign Trade University. In her free time, she likes to read and write book reviews.

Muhammad Bashir was born in a small village in rural Punjab and was the first in his family to attend school. He is interested in understanding informality and its relationship with government capacity and development outcomes. He loves to collaborate on projects involving big data and machine learning and its applications in development and public economics. Muhammad completed his undergraduate in Economics and Mathematics from SBASSE, LUMS, Lahore on a National Outreach Program Scholarship. He then completed a Master’s in Economics from the University of Manchester. At Manchester, he was mentored by Dr. Mazhar Waseem, who has had a great influence on Muhammad’s research interests and professional development.

Omar works as a research associate for the project, ”Pygmalion effects and classroom networks: Evidence from Schools in Pakistan” where he is exploring how delivering teachers expectations impacts student outcomes. Omar also has experience working in the energy sector for the project “Short Term Load Forecasting of Pakistani Households.” Omar is a firm believer in value addition, and the prospect of him being a change agent excites him the most, especially when it comes to contributing positively to society. He holds a Bachelor’s degree in Business/Social Sciences from The University of London International Programmes and a Master’s degree in Economics from the Lahore University of Management Sciences. His thesis was titled “The Impact of Covid -19 Lockdown on Air Quality.”

Pushyami has worked as a research assistant across projects in India and the United States. Most recently, her RA work analyzed nighttime satellite imagery to answer questions tied to the availability and consistency of electricity in the event of natural calamities such as cyclones. Her independent research has looked at the benefits of rural road construction in India, such as greater infrastructure resiliency after cyclones. Her interests lie at the nexus of economic development and environmental change. She holds a Bachelor’s in economics from Miranda House, University of Delhi, and a Master’s in International and Development Economics from Yale University.

Sanjog is interested in political development, experimental economics, and complex systems and networks. He has worked with panel, spatial, and experimental data, and likes to keep himself updated about various developments in impact evaluation methods. Currently, he would like to pursue a predoctoral position before applying to Ph.D. programs in order to gain first hand research experience and come up with research problems to tackle. He aspires to build a career in academia and hopes to contribute to research literature in a cross-disciplinary manner. Sanjog is an economics graduate from Delhi School of Economics.

Shakil worked as an Assistant Research Coordinator at BRAC University, Bangladesh, for a large-scale randomized control trial on reducing intimate partner violence through media campaigns. His current research interests include development economics and experimental economics. Shakil is from Dhaka, Bangladesh, and continues to maintain strong ties with his maternal and paternal hometown, Bhandaria: a small town in rural Bangladesh. He earned a Bachelor’s in economics with a minor in finance from McGill University.

Sharad is a Research Associate at the Indian School of Business, where he works on research questions in finance and policy. Previously, he briefly worked in Market Risk Management at Credit Suisse. His broad areas of interest are welfare economics, repeated games, and policy design. He is enthusiastic about research questions on inequality, sustainable growth, and evolution of social institutions. Sharad majored in Economics and Computer Science during his undergraduate studies at BITS-Pilani.

Shashank aspires to pursue a career in development policy research after graduate studies. His areas of interest include economic history, political economy of development, governance and social policy – wherein he is particularly interested in research focusing on the Indian subcontinent. He has previously worked as a researcher on the FUSE Survey Project at the Gokhale Institute and as a research intern at the Good Business Lab. He recently completed a Bachelor’s degree in Economics from the Gokhale Institute of Politics and Economics, Pune.

Shihas is currently with the Busara Center for Behavioral Economics. Previously, he has been associated with various research and policy institutions, including the Reserve Bank of India, the Kerala State Planning Board, and IIM Bangalore. His research interests primarily include development, social mobility, and political economy. Shihas has done his education at MES Ponnani College and the Centre for Development Studies, Thiruvananthapuram, India.