Many years ago I participated in a project supported by the National Research Council that was designed to nurture linkages between mathematics and the sciences. Through this experience I was introduced to an exciting cross-disciplinary teaching opportunity called the Geophysical Fluid Dynamics Program at Woods Hole.

This summer program, which was founded in 1959, brought leading faculty from diverse backgrounds together with promising young scholars who shared a common interest in nonlinear dynamics. The goal was to introduce them to a then relatively new topic in mathematical physics, geophysical fluid dynamics. 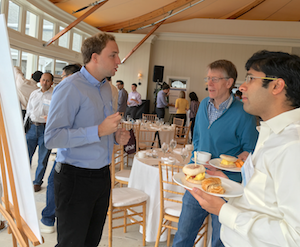 In 2000, the National Research Council published a book on the program that suggested it “could serve as a model for introducing senior scientists, graduate students, and postdoctoral fellows to cross-disciplinary research and for sustaining their interest in and commitment to such research.” The possibilities for replicating this approach stayed with me. I remained curious to see if a similar program could be productive in economics.

The culmination of that ambition came in June 2016, as Andrew Lo of MIT and I planned and led a new offering: the MFM Summer Session for Young Scholars. The sessions immersed students in an exploration of the linkages between macroeconomics and finance, with the goal of advancing quantitative and empirical work on macro models aimed at supporting prudent policy-making. Interestingly enough, the event was held in Harwich, MA, on Cape Cod, not too far from Woods Hole.

Through this inaugural conference, almost 50 young scholars from around the world gained the opportunity to engage in many informal discussions with senior experts from academia, the private sector, and research groups from governmental agencies, much in the way envisioned in the 2000 NRC report. They also listened to panel discussions on key topics and made important new contacts with other young scholars with closely related research interests.

The panel discussions highlighted various challenges and opportunities faced by the experts; the lectures focused on evidence and methods, new data sources, research challenges in the private and governmental sectors, and methods for addressing complexity and big data.

Among many lectures, Deborah Lucas reminded the young scholars that the government itself is a “systematically important financial institution” that warrants scrutiny. Antoinette Schoar reported that we still have much to learn about the systemic impact of housing finance, and Christopher Sims argued that there remain open empirical questions about the linkages between credit cycles and business cycles. Simon Gilchrist looked at inflation dynamics and firm behavior during the financial crisis and discussed its implications for monetary policy.

In contrast to some of the other summer camps in economics, many of the young scholars were sufficiently advanced to present their own research for informal scrutiny and feedback.  We had 17 posters in multiple sessions and 9 student presentations that contributed notably to the conversation and exchange.

This first conference was a great start for a program that I sincerely hope will nurture important research long into the future.