Since March, 22% of American workers lost their jobs. How can we begin to think about such unprecedented labor market deterioration? Erik Hurst studied who has stopped receiving a paycheck, and provides context to the staggering unemployment numbers. Then, Joseph Vavra shares his work on one of the most critical hurdles for parents to get back to work – childcare. 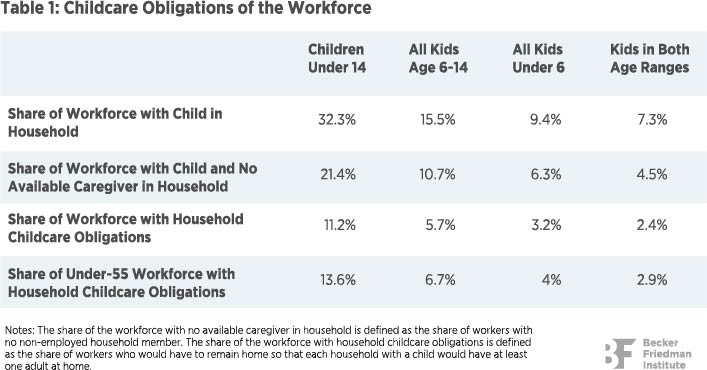 Using 2018 data from the Census Bureau’s American Community Survey, Joseph Vavra, et al., calculate the share of employed households who are affected by childcare constraints.[2] They focus on the civilian employed population older than 18. The first row in Table 1 shows that 32% of that workforce has someone in their household who is under 14. Thus, 50 million Americans must consider childcare obligations when returning to work. Daycares and preschools might open sooner than primary schools, since they tend to have fewer children and thus less scope for disease transmission, so the remaining columns of Table 1 distinguish children under 6 and those 6-14 years old. For about 30% of the workforce with childcare requirements, all of their children are under the age of 6.