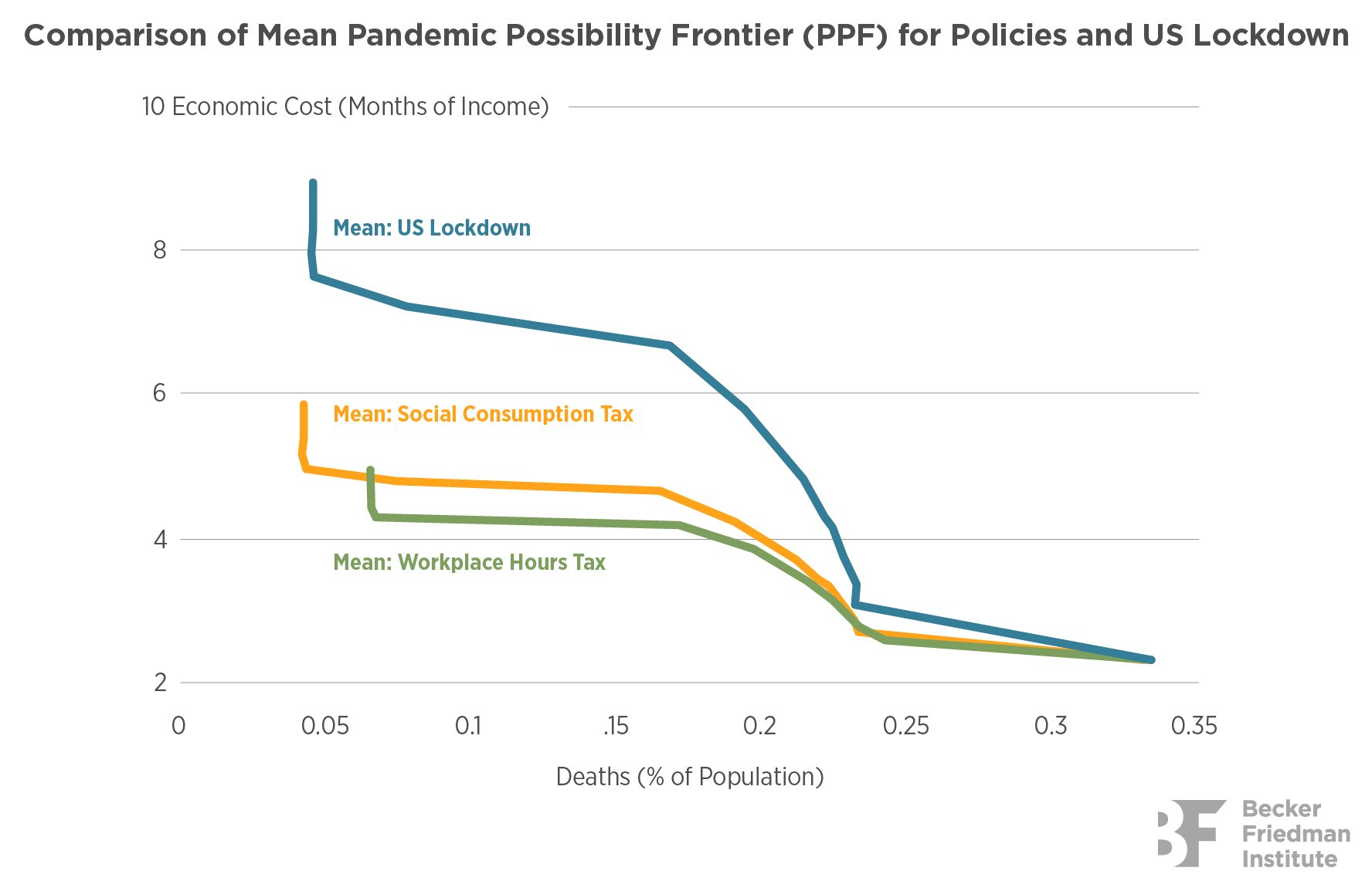 The debate about how to manage the health and economic effects of the COVID-19 pandemic revolves around varying degrees of lockdown vs. no lockdown at all. However, in their recent paper that describes the distributional effects of existing policies, Greg Kaplan, Benjamin Moll, and Giovanni Violante offer a novel alternative. Instead of shutting down businesses or allowing partial openings to prevent people from gathering and spreading the disease, why not tax people’s behavior instead?

In economic parlance, taxes that are meant to drive behavior to achieve a certain goal are known as Pigouvian taxes, after the English economist A.C. Pigou (1877-1959). An example is a factory that emits lots of air pollution, called a negative externality, which creates problems downwind at little extra cost to the factory. One way to get the factory to scrub its emissions is to tax it relative to the social costs that it is imposing.

Such taxes are also enacted to modify the negative externalities of personal behavior, like drinking alcohol and smoking cigarettes. And it is with personal behavior that the authors apply the idea of Pigouvian taxes to the question of how best to limit the negative health and economic effects of COVID-19. Put directly: If you want to restrict the number of people that gather in a bar to have a drink, then you could tax that drink at such a level that you will attain adequate social distancing without closing the bar. Too many people want to attend a baseball game? Price the tickets to optimize attendance. The same holds true for work. Do people feel the need to attend their workplace even if their job does not require their presence on-site? Then make them pay a tax approximate to the cost that they are inflicting on society. Such a tax will keep most workers at home.

However, either one of these taxes is particularly bad for a subset of individuals – in the case of a tax on social consumption, those working in the social sector, and in the case of a tax on on-site work, those in rigid occupations who must show up for work. These costs can be partially mitigated by using the revenues from the tax to provide lump-sum subsidies to precisely those workers that are most adversely affected.

This is a simple description of the authors’ more detailed analysis, which employs their distributional pandemic possibility frontier (PPF) analysis, a technique that describes the heterogeneous effects of policies. In the accompanying figures, this dispersion of effects is shown by the colored bands that extend around the bold lines. Figure 1 (orange line) traces the PPF for a 30% tax on social consumption that is kept in place for different durations. Deaths due to COVID-19 are plotted on the horizontal (x) axis, and economic cost, as measured in multiples of monthly income, is on the vertical (y) axis. As we can see, the longer a policy is kept in place, the greater is the dispersion in welfare cost.

Alternatively, policymakers could impose a tax on hours worked in the workplace and then rebate the proceeds to workers in occupations that demand their appearance. This tax targets the labor supply margin as the source of the negative externality, as opposed to the social consumption margin. The green line in Figure 1 traces the PPF for a 30% tax on workplace hours with different durations. This policy generates a flatter PPF than a social consumption tax. With a tax on workplace hours in place for 2 months, the mean economic welfare loss is about 2 times monthly income, which is about the same as in the laissez faire scenario, but with a substantially smaller number of deaths, by around 0.1% of the population.

The authors do not claim that such alternative policies would be politically expedient to implement, and they detail limitations and challenges in their paper. However, they stress the lesson that targeted policies do exist that offer a more favorable average trade-off between lives and livelihoods than blunt lockdowns.